Where is Australia up to in the US quota danger period?

AUSTRALIA’s June exports to the US are projected to be close to 40,000 tonnes, (full details on release by Department of Agriculture in coming days), 32 percent higher than a year ago.

It means Australian shipments to the US in the first six months of the year will reach almost 226,000t – up a phenomenal 47pc from 154,000t for the same period a year earlier. The January-June figure represents more than 64pc of this year’s quota figure, with six months’ worth of trade still to go. 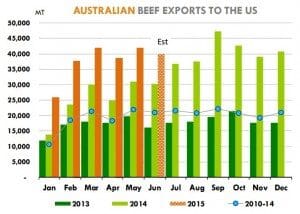 The question for market participants both in the US and Australia is whether the dramatic rate of growth will see Australia’s 2015 quota filled this year. The quota level, which includes the FTA extensions, currently stands at 418,214t.

If it is assumed that Australia will maintain the current level of shipments in July and August (reasonable given large slaughter numbers, the favourable exchange rate and strong prices in the US market relative to other destinations), then by the end of August Australian shipments to the US will exceed 300,000t, or about 72pc of the overall quota.

This leaves only about 115,271t that may be shipped during the September-November period, before the quota is triggered, after which full tariffs apply.

There is one caveat, however. US quota is triggered not by what Australia ships, but rather what US Customs shows as cleared at any point in time. So while Australian authorities keep tabs on  shipments in order to manage the quota once certain thresholds are reached, it will be up to US authorities to determine when the quota is filled.

So far, the numbers from US Customs appears to be tracking behind the official import statistics. This is because of delays in paperwork, especially following the US west coast port slowdown earlier this year.

But once a larger portion of the quota is filled, the paperwork from Customs will likely become more current, and at some point they will then go onto a live system, Steiner said.

Based on data reported from the US AMS system, imports of Australian beef through June 19 were 207,912t.

Will the quota be triggered?

In considering whether the quota will be triggered this year, much will depend on Australian slaughter in the next five months. Source: Steiner Consulting. Click on image for a larger view

So far, slaughter remains high, and in fact well above year-earlier comparisons for each month this calendar year. But processors have had to bid-up in order to maintain the slaughter pace, as evidenced by recent dramatic movements in the EYCI and other indicators.

Demand in the US market and the favourable movements in the A$ have helped push more beef into the US market this year, at the expense of other markets, as illustrated in the above chart.

Shipments to the US may slow down in coming months, Steiner suggests, but they could still remain above the 35,000t level, which, if it happens, could see the quota filled by the middle of December.

“It is not a certain fact, but is quite possible, especially if the Australian dollar continues to slide, as some predict,” Steiner said.

Advice from Department of Agriculture to exporters

The Australian Meat Industry Council export division told members this week that the 65pc utilisation level within the US Beef quota will be reached during this week, triggering the Department of Agriculture to issue an “information advice” to exporters.

The DA advice does not change current trading arrangements, which will continue until 85pc utilisation is reached. As at 29 June, around 151,000t of in-quota exports was left for the remainder of this quota year.

The DA’s market access advice tells exporters that quota is only transferable in the ten-day period between the “Trigger Day”, (the day 85pc quota usage is reached) and the next ten days. No quota certificates will be issued during this period.

There will be no transfers permitted after the ten-day period is complete.

Exporters were warned that they must acknowledge the notice sent to them by DA regarding the Trigger Day and their provisional quota entitlement. Failure to do so by email, could see that quota forfeited and placed in the uncommitted quota pool.

The spread between domestic and imported 90CL beef remains very large, Steiner reported, but the expectation is that in the next three months the spread will begin to narrow.

“At this point we do not think imported beef prices will rally to the extent they did last year—there is a lot of meat in the pipeline for that to happen,” the weekly report said.

Asia markets at this point are paying over US domestic prices, and most product at this point, is going in that direction.