Trade deals have boosted Aus ag, and its competitors too

FREE Trade Agreements have significantly assisted the growth of Australian agricultural exports including red meat in the past 20 years, stripping quotas and tariffs out of markets, improving price competitiveness and aiding in the diversification of markets.

But a global proliferation of additional global FTAs at the same time has also helped competitors to erode some of the benefits Australia has gained in shared markets as well.

81 per cent of Australian agricultural exports are now destined for countries with which Australia has a preferential trade agreement, according to an ABARES Insights paper released today.

In the 10 years to 2020, Australia signed 9 FTAs, including the most recent Indonesia-Australia Comprehensive Economic Partnership Agreement (IA-CEPA). Lower tariffs secured through FTAs have improved the competitiveness of Australian products in export markets and reduced the price of imported agricultural products paid by Australian consumers. Some FTAs also provided guaranteed access for some commodities to the importing country through preferential tariff-rate quotas (TRQs).

But the report also acknowledges how a proliferation of additional trade agreements can and has aided competing exporters.

As of 1 July 2020 there were 305 trade agreements in force globally, according to the World Trade Organisation.

“While trade agreements have improved Australia’s access to many markets, our competitors have also benefitted from the same or similar arrangements, sometimes with the same countries and with similar or better tariff outcomes,” the report notes.

When both Australia and a competitor have an FTA with a common export market, the overall impact of the agreement on competitiveness will depend on “who got the better deal”.

Examples specific to Australian beef highlighted by the report include the Korea Australia Free Trade Agreement (KAFTA) and Japan Australia Economic Partnership Agreement (JAEPA) which came into force in December 2014 and Japan 2015 respectively.

Under JAEPA the concessions received for beef were not as favourable as in the CPTPP, which gave Australia a significant advantage over the United States.

This advantage lasted only until 2020, when the United States came to a separate agreement with Japan that, for beef, was equivalent to the CPTPP. 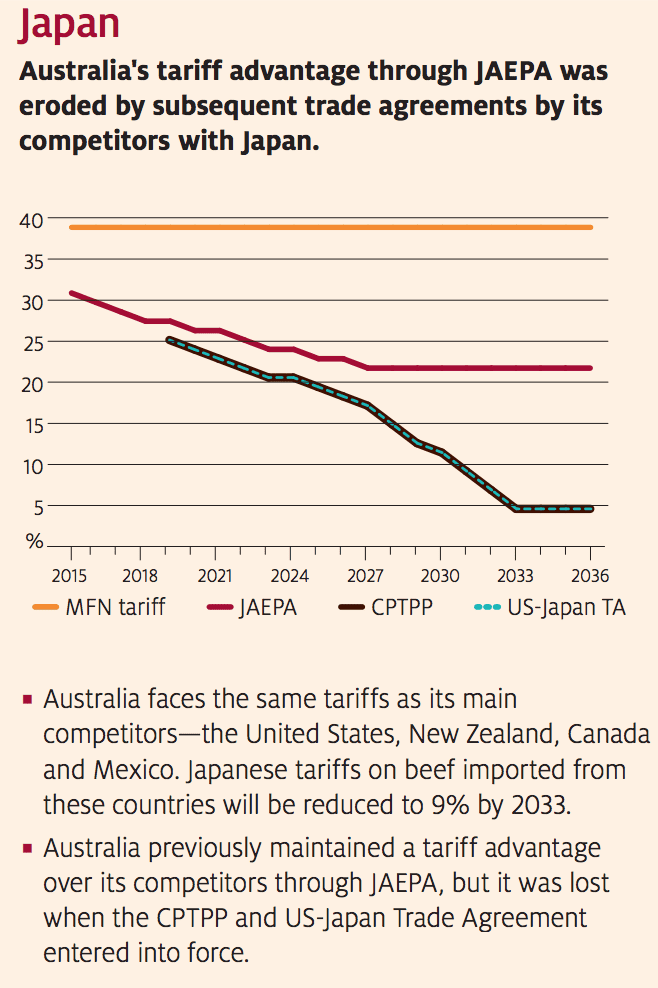 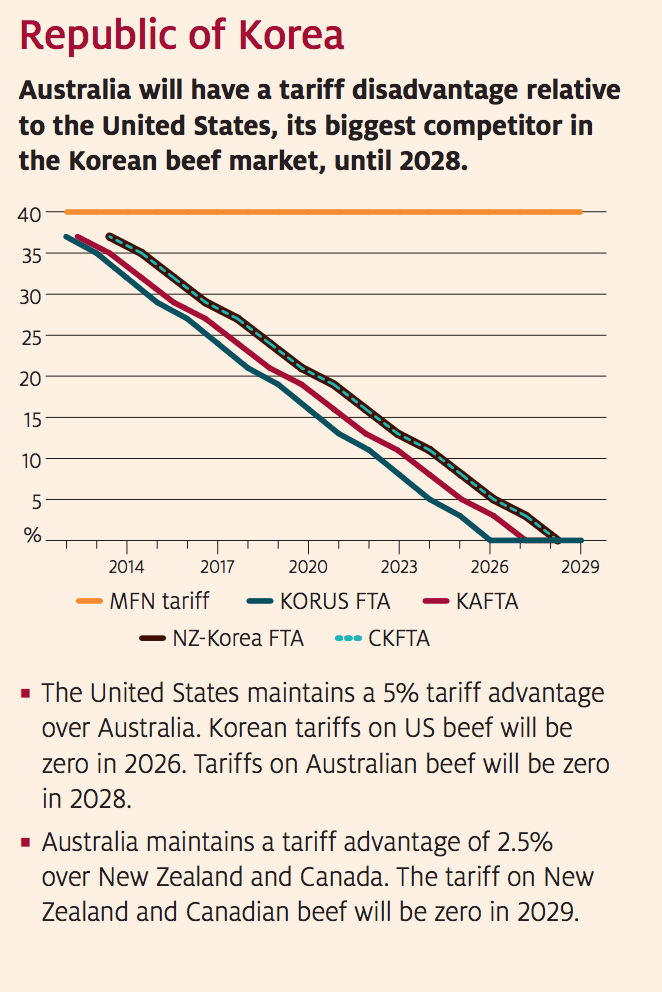 The only major trading partners with which Australia does not yet have a preferential trade agreement are European Union, the United Kingdom and India, and negotiations are underway with all three.

“By 2050 Indonesia is projected to be the world’s fourth largest economy, with its per person consumption predicted to be greater than China for key commodities such as cereals and beef.

“Australia’s agricultural exports are poised to benefit greatly from this projected rapid growth and the preferential access we have secured with this important trading partner.”

He warned that it was important for the Australian Government to keep working on securing progressive advances as other countries would continue to try to erode the benefits Australia secures through their own trade negotiations.

The report notes Australia is now among the top 15 agricultural exporters in the world, with the sector exporting about 70 per cent of production to 192 countries.

“This success on the world stage could not have been achieved without government and industry partnerships to secure market access in global markets,” Dr Greenville said.

“Ultimately the priority for the Australian agricultural sector will continue to be about having access to export markets and being competitive in those markets.

“Ensuring Australia provides access to imported products will also be important for the competitiveness of our domestic industries.

“The negotiated removal of trade barriers, whether through our own FTAs or through those between other trading partners, will continue to support more efficient global value chains and a more liberalised global trading landscape.”

Stocktake of Free trade, competitiveness and a global world: How trade agreements are shaping agriculture can be accessed at the report’s website page.