RECORD high cattle prices are making it increasingly attractive for processors and others utilising carcase or whole primal beef to chase smaller sub-primal muscles in an attempt to extract optimum value from each animal.

Seam-cutting of good performing sub-primals from surrounding muscles has been around for years, but there’s more evidence than ever that the process is being adopted along the supply chain.

While there’s often a labour and carcase yield sacrifice attached in harvesting specific muscles like this, the increase in value that can be achieved in wholesaling a higher-performing muscle for another purpose is becoming increasingly worthwhile, processors say.

Removal of rumps caps and other rump seam-cutting is now routine in many beef plants, but there’s growing evidence of seam-cutting work taking place in other primals.

During a series of MSA showcase regional events across Australia recently, attention was drawn to the possibilities in seaming the petite tender muscle and flat-iron steaks from blades. Samples were provided for producers attending the events to taste.

The name petite tender (anatomical name: Teres Major) was coined to distinguish it from other muscles forming the blade primal group, which have a reputation among consumers for being dry and lacking tenderness.

That’s providing a real cost-driven opportunity in food service segments like banqueting and conference menus, where mignons are a popular, but costly option.

The petite tender muscle sits immediately above the oyster blade, making it easy to harvest when the oyster blade is removed. The job is so easy that some plants do it on the slicing table in the boning room – not in a separate fabrication room, Beef Central was told.

Two large processors who are already routinely extracting petite tenders are HW Greenham and Teys Australia. In heavier carcases, the petite tender weighs from around 200g to 250g.

“What’s exciting is the potential to extract a few more dollars from the value of the carcase through value-adding these items,” Mr Payne said.

At the time of the presentation, a bolar blade and a whole clod were being sold in the market for about $8.50/kg, while a striploin was worth $28/kg.

“Both the seamed oyster blade steak and the petite tender will eat like a four-star steak,” he said.

“Certainly there is a little more work attached in doing it, and some of the cuts have a considerable yield loss – but it’s coming off a low value base,” he said. 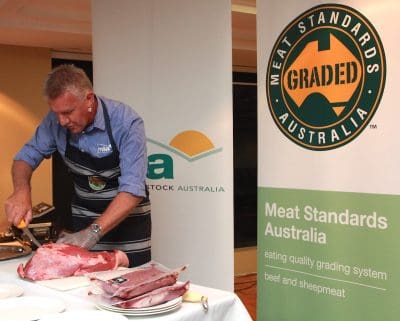 In the case of the oyster blade, a 2kg oyster will yield 1kg of flatiron steak, in two pieces, each 500g in weight.

“There’s quite a few muscles in the bolar blade. But once we have the oyster blade and bolar blade out, the petite tender is very easy to access,” Mr Payne said.

He told Beef Central it was still reasonably ‘early times’ for new, less familiar items like flat irons and petite tenders, making it unclear how much demand there would be from food service or retail operators.

“But it’s gaining in popularity, particularly in the food service market,” he said.

HW Greenham managing director Peter Greenham Jr said in the US industry (albeit typically much heavier carcases than in Australia) petite tenders were now routinely extracted from the carcase, and sold at a significant premium over what the basic clod/blade was worth.

His company had found a good market for seamed petite tenders for the past three or four years, he said.

“It’s a very tender piece of meat, and especially from larger animals, is large enough to be used as an alternative to tenderloin/eye fillet, in items like a fillet mignon or a beef salad. They’re being seen a lot more widely now in segments like Wagyu, with higher carcase value and big carcase weights.”

Mr Greenham said the muscle was harder to extract and utilise from a lighter carcase weight animal, but Greenham’s regularly applied the process to its Cape Grim, Pure Black and Tasmania Natural beef programs.

“We have a couple of large domestic and US customers that routinely use them, and also provide them to other food service customers, on order,” he said.

“One of the challenges is finding the right customers for this piece of meat, because it is lesser known and not yet well understood.”

“Not many people know about it yet, and the name is not yet well understood. Some still call it a clod tender, which does not have a great ring to it. Others aren’t yet prepared to think outside the square – to them, it’s tenderloin or nothing.”

“Others (presumably large processors where volume makes such specialisation more difficult) prefer to sell their clods whole, as a commodity line, without the added expense.”

Mr Greenham said petite tenders were quite an easy value-add – but getting customers using it, remained a challenge.

“You need to get a good premium for the cut to justify it,” he said. “A processor really needs a regular, committed customer. I don’t think it would work simply putting it into the wholesale market and hoping to find a buyer.”

Here’s a link below to a short US video, showcasing ways to prepare the petite tender  for food service use