RETAIL beef prices during the first quarter of 2017 have eased, for the first time since 2013, Meat & Livestock Australia reported today.

Plenty has changed in the space of two years. Unprecedented export demand, which diverted beef from the domestic market, has eased; US production has recovered from a cyclical trough and there is greater competition across a range of key export markets.

Meanwhile, Australian cattle slaughter has contracted from a four-decade high to a two-decade low. 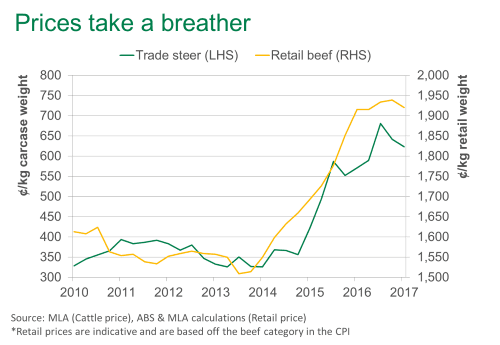 With respect to the domestic beef market, the easing in export demand has overshadowed lower slaughter cattle supply. Indicative retail prices during the first quarter of 2017 eased for the first time in four years. Cattle prices, as illustrated in this comparative graph above, declined over the same January-March period, but remain historically high.

Subsequently, after bottoming-out in mid-2016, domestic beef utilisation (a measure of production minus exports) increased up to the end of March this year. Over the twelve months ending March, the domestic market accounted for 30 percent of beef production, above the 25pc recorded in 2015 and in-line with the five-year average.

While there has been a short-term strengthening of the US domestic market since the start of the year, prices still remains below the 2014-2015 peak, and growth in US beef production will continue to place competitive pressure on Australian product around the world.

Meanwhile, Australian beef production is expected to begin increasing in the latter half of 2017 and continue over the next few years, providing further support for the domestic market.

Major multi-state wholesalers confirmed the downwards price trend on some wholesale cuts to Beef Central this morning, but suggested the change in the weather had also been a contributing factor.

“Certainly loin cuts have become harder to sell, as it has cooled off,” one wholesaler contact said.

“We’ve seen reductions perhaps averaging 7.5 percent on a range of cuts, as consumers start to preference topsides and knuckles for winter cooking styles, over grilling cuts. Some cube rolls may have declined $1/kg at wholesale from where they were earlier, while striploins are down more like 50-75c/kg,” he said.

“But export conditions, and somewhat lower cattle prices, are also a contributing factor,” he said.