No bottom in sight for US grinding meat prices

DESPITE market sentiment a fortnight ago that the market might be about to find a bottom, imported 90CL grinding beef prices to the US have continued to fall away sharply during early stages of December.

Australian 90CL blended cow last week was quoted at US184c/lb CIF (down another 3c/lb on the week before, and back US71c/lb on this time last year). 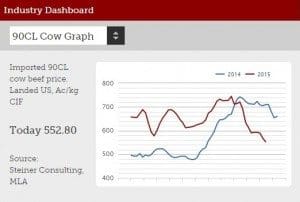 In local currency terms, prices were quoted on Friday at A552.8c/kg, down from 565c a week earlier and, as this image from our home page graph shows, above A700c/kg this time last year when the market was still not far off its peak.

“It seems that every time that US end-users look to obtain some forward coverage they end up overpaying, and thus many are now stuck with expensive inventory and slow sales – not a good combination,” Steiner Consulting’s weekly report for the Australian industry said on Friday.

“As a result, looking to sell more beef in the current US market has become a very difficult task indeed.”

Some market participants indicated that prices were lower for product trading from NZ. Australian packers continued to hold some higher asking-prices and, on the fat trim especially, indicated that they could get product sold at higher levels in markets other than in the US, Steiner said.

“Still, the reality is that domestic beef prices in the US remain quite week and domestic prices have not become competitive for grinds as well. Domestic cuts have been under imported values for some time, and in some cases hold a 20-30c advantage to imported levels.

“Even on steak cuts, the spread between domestic and imported has all but disappeared,” Steiner’s report said.

Fed cattle prices in the US collapse

The October rally in the US fed cattle market now appears increasingly like a ‘dead cat bounce’ rather than a correction from the September lows, Steiner suggested.

“Indeed, the nearby fed cattle prices are now back to the lows seen a couple of months ago, as market participants worry that lack of any sort of momentum ahead of the holidays does not bode well for the market in January and February.”

Front-end fed cattle supplies in the US remain burdensome, with many reporting feedlots continue to hold cattle on feed rather than cut their losses.

Dressed carcase weights in the US are at all-time record highs, and that is unlikely to change quickly given the slow pace of marketings of feedlot cattle. Prices for steak cuts seasonally peak in the US in the next two weeks, and they become sharply lower after the holidays.

“At this point packers continue to find it quite difficult to sell end cuts, with retailers looking at a number of inexpensive options to feature in January,” Steiner said.

“Ground beef prices are lower but they are still relatively high compared to other proteins.

Current US cattle futures hold a modest premium for cattle going into February and April, largely reflecting the possibility for winter weather impacts, but also the improvement in demand that’s normally seen ahead of grilling season.

Current fed cattle futures imply lean grinding beef prices through the first half of 2016 at around US$2.15/lb.

“It is not unusual for US domestic lean grinding beef prices to bottom out in late November or early December, and then be higher in January and February. It appears that we are at that point today,” Steiner said.

New Zealand producers have not been holding back and they are sending bulls to slaughter well ahead of schedule this year. Producers are looking to market bulls earlier than normal, perhaps to capitalise on still relatively high lean beef prices.

The sharp increase in NZ bull slaughter may limit the country’s supply of lean grinding beef later in the marketing year, especially during the March-May period, Steiner suggested.