JBS AUSTRALIA has started processing cattle for its latest branded beef project, using Shorthorn-derived cattle to create a ‘point of difference’ from the myriad Angus brands in the domestic and export marketplace.

The new grainfed brand, christened Thousand Guineas in reference to the price paid for a prized Shorthorn bull in the early 1800s, has wowed chefs and restaurateurs in initial trials and samples around the country due to its ‘exceptional eating qualities.’

The brand has been developed in conjunction with the Shorthorn Beef breed society and has been enthusiastically supported by Shorthorn cattle producers across the country who are now receiving a 10c/kg price premium for eligible cattle – the same as that offered in many Angus breed-based programs for feeders for domestic and export markets.

Feeders can be consigned to one of five JBS feedyards including Caroona, Riverina or Prime City (NSW); or Beef City or Mungindi (Qld). 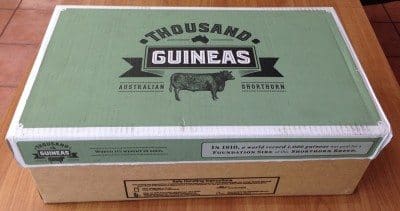 JBS Australia’s livestock manager northern, Duane Woodham, said the premiums were a reward for producers who had a long history of producing some of the best livestock in the country, and had now aligned themselves with the brand.

“The eating qualities and performance of Shorthorn cattle is some of the best that we have seen, so it seemed a logical progression for us to develop a program that financially rewarded the producers for their hard work,” he said.

“With prior knowledge of the performance from our feeding data, we are very confident they will rival our Angus feeders.”

“We have seen a very strong sense of ownership and belonging with the Shorthorn producers that have aligned with the Thousand Guineas brand program.”

In the domestic market the brand will be targeted at food service, with a focus on higher-end steakhouses in capital cities and tourist locations to showcase the breed. Exports will also occupy a considerable portion of turnoff, with target markets including North Asia and the Middle East.

“We have established an export supply chain for the brand, and we’ll be excited to see the first shipment hit the shores in the next couple of weeks,” he said.

Export customers were ‘hand-selected’ based on their experience and success in working with high-end and branded programs.

In addition to export markets, Mr Tatt said feedback from the domestic food service sector had been overwhelmingly positive following recent engagements with restaurant, catering and hotel operators in Melbourne.

“Chefs want to differentiate their offering from their peers, and a Thousand Guineas Shorthorn brand underpinned by very high eating qualities ticks a lot of boxes for them,” he said.

One of the motivations for the brand program is the abundance of commercial brands in the marketplace with an Angus connection, which at some points runs the risk of over-exposure. In the US market for example, there are more than 180 branded beef programs making an Angus claim. In Australia, the number most be a dozen or more. Beef Central is not aware of any brand in Australia currently making Shorthorn breed claims, despite the high eating quality characteristics of the breed,  suggesting there will be an element of exclusivity which some customers will find attractive.

The finished beef product will be further underpinned by MSA grading and achieve a minimum marble score of two, after 120-130 days on feed.

JBS Australia has a long history of association with Shorthorn cattle, tracing back to the former AMH company’s successful Your Choice 150-day grainfed programs in the 1990s. While Your Choice was open to all breed types, AMH publicly endorsed the performance of Shorthorn genetics in feedlot and carcase performance results shared with cattle suppliers at the time.

The addition of a high quality beef brand underpinned by the Shorthorn breed is part of JBS’s well-documented strategy to transition its business away from being a commodity producer to a demand-driven model with a selection of brands to meet specific supplier and customer requirements.

Initially the target is to process 350 head per week for the program, but the plan is to expand as the supply chain gains momentum. First feeders for the program were inducted at the JBS Riverina Beef feedlot in early September, and processed during early February.

To create value for everyone in the supply chain, consistent year-round supply to menus showcasing beef brands was key to the long term success of the program, Mr Tatt said.