Coles has launched a carbon neutral beef brand, making it the first major supermarket in Australia to do it. Picture: Coles

THE sustainability battle between Australia’s major supermarkets has ramped up in recent weeks, with Coles becoming the first of the major retail chains to release a carbon neutral beef brand.

Coles has been working with its suppliers for the past two years to set up carbon storages through planted trees and make emissions reductions in their grazing operations. The company has also purchased carbon credits from the Armobilla Regeneration Project in Western Queensland.

The move has piqued the interest of Beef Central readers over the past two weeks, with many writing in to ask questions about the new product. We put those questions to Coles’ national beef procurement manager Steve Rennie.

How much of Coles’ beef is carbon neutral?

At this point the carbon neutral line only covers Coles’ Finest beef range in Victorian supermarkets, with plans for it cover the ‘finest’ range across the country over the next 12 months. Coles Finest is an MSA-graded 100-day grain fed line.

Mr Rennie said he was unsure of percentages, but it was only a small portion of Coles’ beef options.

“It’s only a really small part of our beef range now and we have had meetings about possibly expanding it and customers will drive any of those decisions,” he said.

“But going on the interest in this subject and the way knowledge is building, it’s hard to see it going away.”

Mr Rennie said as the rollout continues this year, the company was keen to hear from producers looking to participate in the program.

“We’ve already been fielding calls from producers since the announcement and we are keen to hear from more who are interested in this carbon neutral program as we work towards national supply,” he said.

“We already have some suppliers identified, but we are very open minded and looking for people who are interested in it.” 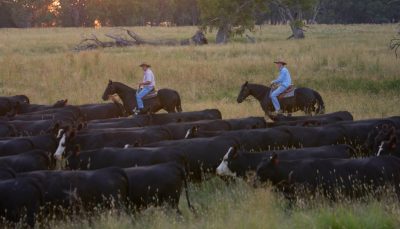 Is there a price premium in carbon neutral beef?

A quick search of Victorian carbon neutral scotch fillet steak from the Coles Finest range shows the prices are the same as the rest of the premium range. Looking at the packaging “carbon neutral” is written in small text.

Mr Rennie said the company’s research found there was significant interest in claims like ‘carbon neutral’ from consumers.

“At this stage we actually don’t see customers specifically asking for carbon neutral beef, but we do know they have a growing interest in sustainability and this is just one part of it,” he said.

“I’m not sure if customers will pay a premium for carbon neutral beef but the idea is to give them choice.”

Mr Rennie said there was still confusion from customers about the meaning of carbon neutral.

“I’m not sure if I know anyone, let alone the customers, who completely understand the meaning of carbon neutral,” he said.

“But when we do programs like this more questions are raised, and we build more knowledge on the subject.”

Is plastic packaging included in the carbon neutral status?

Coles’ carbon neutral status is measured throughout its supply chain, with all the elements from the farm to the retail shelf accounted for. The company has been verified by an organisation called Climate Active, which has a Federal Government-accredited carbon neutral certification program.

“Our packaging is made from 90pc recycled materials and is fully recyclable and we have worked on the footprint of the packaging for this brand,” he said.

“Everything used to get the meat to shelves is picked up, including packaging, electricity and transport.”

“We started with a carbon footprint assessment from Integrity Ag & Environment, which is audited by a third party. Climate Active then go an verify it against the audit, so it’s a very extensive process,” he said.

While Coles has been working with its suppliers to reduce their carbon footprint and generate carbon credits to claim against their operations, it has purchased offsets from another project in Western Qld.

Carbon farming has been one of the most controversial developments in Western Qld and NSW in recent years, with many saying it has taken livestock and people away from the local economies.

Looking at the Clean Energy Regulator’s website the Armobilla Regeneration Project, which sold Coles the credits, is in the Quilpie Shire and is using one of the vegetation carbon farming methods.

Mr Rennie said he had limited details about the project, but they complied with the Climate Active guidelines.

“The credits met the Climate Active standard, which is the gold standard as far as we’re concerned,” he said.

Mr Rennie said with the current science and technology it was impossible to make a carbon neutral beef brand without purchasing credits.

“It would be great to inset our operation completely, but the science is showing that is impossible at the moment,” he said.

“Our priority is to work with our suppliers to lower their carbon footprint, through technologies like feed additives and transport.”