Argentine meat packers are reported to have reached a preliminary deal with the nation’s government that will allow beef exports to partially re-open, following a month-long suspension aimed at cutting domestic food price inflation in the lead-up to a national election later this year.

On May 17, the Argentine government imposed a surprise 30-day ban on all beef exports out of the South American nation, in an effort to contain domestic Argentinean meat prices. Argentina is China’s second-biggest beef supplier after Brazil.

The nation has a long history of imposing sudden embargos on its beef exports, in some past examples for up to 12 months, in order to avoid unrest among its beef-obsessed citizens by subduing beef prices.

Quoting industry sources who could not be identified for political sensitivity, news agency Reuters overnight reported that a preliminary agreement had been reached between the government and processors on the volumes allowed to be exported.

“All other details are being discussed,” a source from the meat exporting sector with direct knowledge of the talks, told Reuters. Government spokesmen declined to comment.

Talks between Argentine policymakers and meat industry officials have been taking place over the past week, as the month-long ban neared its end.

Meat packers have been negotiating a way to lift the restriction, amid fears it could be extended, Reuters reported.

Local newspaper La Nacion reported that the government had proposed that meat processing plants export 50pc of their usual volume during June and July. The story cited an unnamed source saying “a general consensus” had been reached on a deal.

In the case of quotas agreed with the European Union and the United States, and shipments of kosher meat to Israel, the re-opening would be 100pc.

“That is what the state said it wants. It remains to be seen if it will relax those terms,” said a second source, who asked not to be named due to the political sensitivity of the issue, said.

The difference in positions had been “narrowing,” a source in the office of President Alberto Fernandez said on Wednesday.

Overall inflation in Argentina is expected to be about 50pc this year. With congressional elections looming at the end of the year, beef prices remain a huge political issue in Argentina, one of the largest beef consumers in the world. 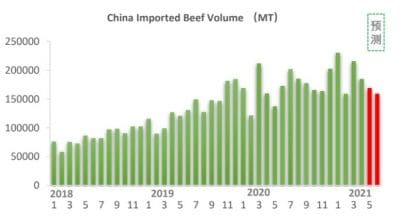 In the 12 months through April, meat prices in Argentina soared 60-70pc, according to official data. In the first four months of 2021, 29pc of the beef produced in Argentina was exported, of which 77pc went to China.

Argentine Production Minister Matias Kulfas told local media on Tuesday that the government was close to reaching an agreement on meat, that would free-up exports.

Australian export trade sources told Beef Central this week that large volumes of US export beef had started to move into China this month, partly to offset the deficit left by the absence of Argentinean beef since the May 17 export ban. 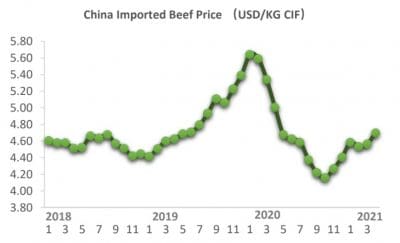 The Argentine government’s move to suspend exports would have a “huge impact” on Argentina’s market share in China over the next two months, a Chinese imported beef trade source said.

Argentina accounted for 21pc of China’s imported beef volume of 184,900t in April, and 22pc in March – but that share figure would drop dramatically as a result of the May 17 export suspension, Chinese trade sources suggest.

China’s imported beef prices had continued to rise over the past month, they said.

One source predicted that China’s landed beef volume will continue to fall in the next two months, and will remain around 150,000 to 170,000t.