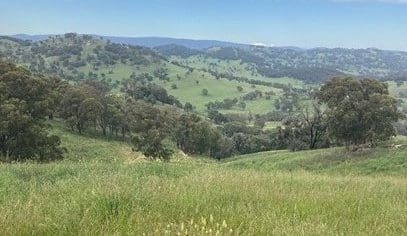 The holding was secured days after being offered for sale by expressions of interest by Chris Meares from Meares & Associates.

For the past 20 years, the 2833ha well-improved and well-developed grazing property has been held by John Carpenter – breeder of Angus/Santa Gertrudis cross cattle.

Carnegie is situated in a 950mm annual average rainfall district and is watered by a 15km Mulla Creek frontage plus 82 dams.

Rated to carry between 18,000 and 20,000DSE, Carnegie was sold on a walk-in walk-out basis with 385 Santa x Angus breeding cows, together with replacement heifers, and a good inventory of plant and equipment.

The 4860ha Kintyre is located 60km east of Glen Innes and features 20km of frontage to the Mann (13km) and Henry (7km) Rivers. Conservatively carrying 800 cows, it has the scope to run more than 1000 breeders.

In the meantime, Meares & Associates has also sold the 2215ha Achill West and the nearby 522ha Highdowns, both east of Armidale in New South Wales’ New England.

Principal Chris Meares was unable to disclose the individual sale prices or the buyers’ identities but said the three sales (including Carnegie) collectively grossed around $45 million.

With its above average 825mm rainfall, together with 50ha of irrigation, Archill West has been well improved with regular applications of fertiliser and is rated to conservatively carry 16,000DSE.

Mr Meares said the three New England sales were based on similar criteria.

“The buyers were looking to purchase high-rainfall, well-improved country, suitable for either breeding or backgrounding of cattle, knowing the properties were versatile and could equally suit a sheep – prime lamb or wool growing operation.”

“It is interesting to note the majority of interest was from private family investors who already own rural property and were looking to expand their operations,” Mr Meares said. The 2215ha Achill West and the nearby 522ha Highdowns, both east of Armidale in New South Wales’ New England, have sold.

The Southern Queensland property Retreat, described as AAA-grade Condamine country, is under offer for more than $8.1 million, after failing to sell at auction.

When it was listed for sale in September, there were 820ha planted to oats with the possibility of a further 600ha developed for cultivation.

Retreat holds a 425 megalitre water licence and is watered by a new bore and four dams.

The nearby 2480ha North Combarngo, described as a prime turn-key Condamine backgrounding asset, was sold under the hammer for $11m ($4435/ha) by producers Mick and Petra Johnson, who own cattle holdings at Wallumbilla and Yuleba.

Located 76km west of Condamine and 76km from Roma, the country on North Combarngo features developed brigalow and belah running back to lighter sandy loams with excellent stands of buffel. Around 346ha is cultivated and planted to oats.

The property is watered by three dams and a bore with an all new system that waters the entire property through 23km of poly-pipe to 16 poly-tanks and 19 concrete troughs.

Retreat and North Combarngo were purchased by Packhorse Investments in February 2020 and formed part of the 21,045ha Naturi Aggregation which stretches from Condamine to Surat.

The sale of Retreat and North Combarngo were handled by Bruce Douglas of Ray White Rural.

The diversified grazing and farming aggregation comprises the 20,915ha Bulgoo, 40km south of Cobar, and the 29,000ha The Meadows, 55km south west of Cobar, in NSWs’ Western Division.

The sale of Bulgoo included the large carbon project, locked in place until April 2025, that is generating in excess of $1m annually.

Rated to carry 10,000 DSE, the aggregation has been running 2300 Australian White ewes and progeny, as well as 10,000 farmed and rangeland goats.

The country on Bulgoo is generally flat to slight undulating to Mount Windock Range and includes flood out box flats.

The 49,811ha holding is watered by 40 earth dams (half of which are securely fenced), five bores, seasonal waterholes and the Buckanaroon Creek that runs through the property from east to west for around 20km.

In the meantime, the 10,000 rangeland goats and farming and station plant will be sold at a clearance sale in the coming weeks. Selling agent Jaimie Pay from Elders could not disclose the buyer but said the producer was seeking additional breeding country to complement his existing holdings.

Situated between Inverell and Glen Innes, the 1515ha block is suited to breeding or finishing cattle with the option of fodder production.

The soft fertile soils range from undulating black to red basalt to trap, supporting diverse winter and summer perennial pastures and an abundance of feed due to being very lightly stocked.

Ms Pay said the open grazing coupled with magnificent shade trees give the property a ‘park like’ appearance.

The Springs is watered by 21 dams, springs and 19 water troughs.

Most of the fences have been renewed within the last 15 years.

Vendor Geoff Bassett whose family has held The Springs for 36 years is selling to consolidate his operations. A Queensland buyer has paid $5.9 million bare at auction for The Springs, a highly productive grazing property in northern NSWs’ New England region.

Nooralaba is suited to cattle, sheep and goats with an estimated carrying capacity of 500 breeders, or sheep/goat equivalents.

The country is open woodlands with box, gidgee and soft mulga, with the 26km eastern boundary of the property completely exclusion fenced.

Nooralaba is watered by an artesian bore, two dams and 24 watering points across 46km. The Leader Creek runs through middle of property with seasonal waterholes.

The property has a 25-year carbon agreement with a ten-year payment period that runs until 2026, with around $690,000 yet to be paid out. After that time, the incoming purchaser can renegotiate a potentially higher carbon price.

Ben Forrest and Grant Veivers from Resolute Property handled the marketing and the sale of Nooralaba. Nooralaba is suited to cattle, sheep and goats with an estimated carrying capacity of 500 breeders, or sheep/goat equivalents.