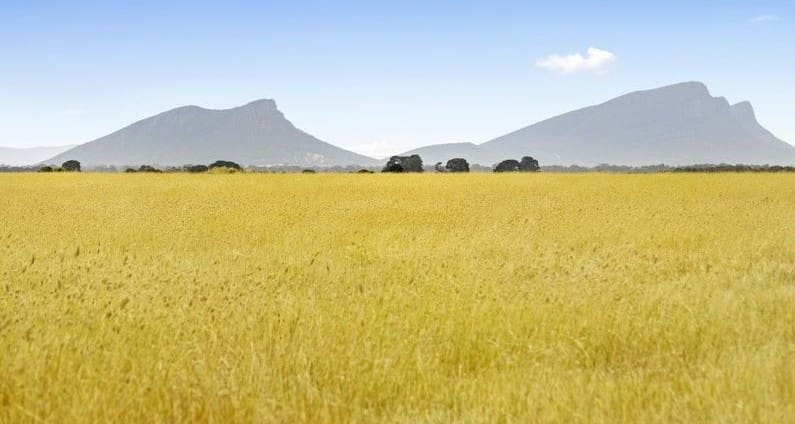 Mr Myers was raised in Dunkeld, in the southern Grampians region of Victoria, and heads up the family company Dunkeld Pastoral, which manages a diverse range of businesses across the agricultural, land management and tourism sectors.

In November last year, his company reportedly paid around $30m for the 2405ha Dunkeld district property, Blackwood Station, a large-scale livestock and cropping enterprise that was offered with 1800 Angus breeders.

The company also holds the leases for two north Kimberley pastoral properties – the 610,000ha Doongan and Theda Stations – which are managed to protect the unique biodiversity of the region.

The Devon Park portion he recently purchased is located 11km south of Dunkeld and features sweeping aspects over the Grampians National Park.

The 1273ha of highly productive country are suitable for grazing 17,750 dry sheep equivalents, with portions suitable for cropping.

It was offered to the market for the first time in more than 90 years by Sarah Reid, a descendant of wealthy pastoralist and landowner WJT ‘Big’ Clarke in the mid-1880s. Her mother, cattle producer Susie Clarke, retains the remaining 1155ha portion.

Danny Thomas from CBRE Agribusiness handled the sale of Devon Park which achieved $14.155m or $11,120/ha.

While the price and purchaser are undisclosed, it is understood the buyer is an existing cattle producer and Forest Grove is a good fit with their supply chain.

Phillip Kelly from Colliers International reported it was a strong result in line with expectations.

“The interstate buyer handled the purchase carefully, given COVID-19. They sought state government approval to cross the border and complied with the restrictions, including isolation, when they returned home.”

Forest Grove was offered to the market after 20 years of ownership by cattle producer and farm activist Lee McNicholl and his wife Megan, who also own Arklow and Melrose near Dulacca.

The 3384ha holding has been destocked since late 2019 and boasta an excellent body of feed following recent rainfall and recovery from drought conditions. Wallumbilla cattle breeding property Forest Grove, in Queensland’s Maranoa region, was offered to the market for the first time in 20 years.

Buyers were locals Cameron and Jacqui Tickell from Combanning, Charleville. After 39 years on Nungil, vendors Rob and Robyn O’Sullivan decided to retire.

Country is a balanced mix of flat to slightly undulating gidyea/brigalow, poplar box/sandlewood/kurrajong, mulga, lake and river frontage country. About 7280ha has been pulled, 6070ha of which was re-pulled in the past three years. There is an area of about 2225ha of low edible mulga, with a good area of standing mulga reserves, and 405ha of highly productive flooded lake country.

There are also four sub-artesian bores, as well as 31km of new boundary fencing and 30km of new internal fences. More than 60km of new fencing has been erected in the past 12 years. There are eight grazing paddocks, seven holding paddocks and mustering squares with 6km of lanes.

Selling agent Keith Richardson from Elders Real Estate said Nungil had had a good summer and presented with a good body of feed after 230mm since Christmas.

Originally an unimproved sheep property, it now has a safe carrying capacity of 800 breeders with progeny to weaning age.

Improvements include a two storey Queenslander homestead, machinery shed and quarters. There are also steel cattle yards at the homestead and a second set of bull rail cattle yards.