UNSEASONALLY early rain has resulted in a high number of sale negotiations and contracts in the North Queensland grazing property market recently.

Herron Todd White North Queensland director and valuer Roger Hill said the normal selling period in the region is after the summer wet season, from March to June, when properties are looking their best.

“This year saw limited market activity during this period due to the bleak seasonal conditions. But now that some rain has fallen in winter, things have stepped up,” Mr Hill said.

“Currently, we’re aware of ten contracts in the marketplace and total sale volumes for the year are expected to be within a healthy range from 20 to 25 cattle stations,” he said.

Mr Hill said the contracts were in the $4 million to $13 million price range, running between 3000 and 9000 head and were collectively worth between $45m and $50m exclusive of cattle, plant or equipment.

“It is exciting to see activity in a market segment that has been quiet for some time. Up until recently, most of the activity was in the sub-$3m market because it was affordable.”

Mr Hill said despite the increase, there was not a large pool of potential buyers.

“They are all established grazing families doing their due diligence and negotiating reasonably-priced deals. They’re confident these cattle stations are complimentary acquisitions that provide excellent expansion to their existing businesses.”

Mr Hill said from an independent viewpoint, the sale prices of the ten properties under contract were sensible and did not reflect an increase in values from last year.

“When you analyse these sales, they are not reflecting an increase in market values. They are confirming pre-drought sale value rates and indicating a recovery in confidence after the drought. In some areas where recovery from the drought is yet to occur, there is limited buyer interest. The prices being paid are certainly not above the pre-drought levels.”

The recovery in values to pre-drought levels was looking good for districts to the north of Richmond, Julia Creek, Cloncurry and Camooweal up to the Gulf. The other area was from Hughenden to Muttaburra and back down to Prairie.

Mr Hill said the way the recent negotiations have played out suggests a solid consolidation is occurring.

“Some people have come into the negotiations and have thrown a low ball price to test the resolve and position of vendors. However, those vendors have held out in private consultation and most have secured fair and sensible values. During the drought, buyers could throw loose figures on the table, and vendors in a pressured position would have to take it.” 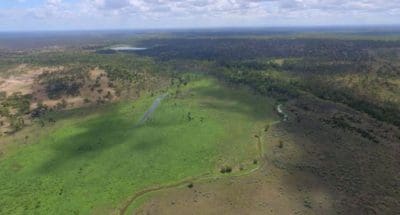 Inkerman and Woonton Vale Stations were sold under the hammer, while Gainsford sold prior to auction for what is believed to be a district beast area record price (see earlier Beef Central story).

“The prices paid were within expectations. Six to twelve months ago it was difficult to find someone with the confidence to buy a property. Today, confidence in the buying ranks has returned on the back of very strong cattle prices, a reasonable outlook for the cattle market and unseasonal winter weather. While market values have not changed, there is definitely more buyer confidence.”

Mr Woodhouse said the value of the Central Queensland property market has been very strong this year and hopes that will flow further north.

“The biggest benefit would be the continued improvement in the buying pool. At present, there are more people with the confidence to spend their money. It is hard to say whether that will translate into increased market prices, but it may actually boost transactions.”

Mr Hill said the next wet season would determine if the market will move to positive value increases.

“Buyers won’t be ‘feverish’ for another two to three years and maybe not at all in this business cycle. The drought and other financial pressures have forced business operators to take a more cautious approach, and as a result, there is increased due diligence. Perhaps with the cattle market coming off a bit lately, property buyers will remain cautious,” he said.

“It will take a good wet season for more properties to come onto the market. We’re praying for rain, and hopefully, it’s just around the corner.”

Upcoming sales in the Mount Surprise and Georgetown region of North Queensland to watch include: