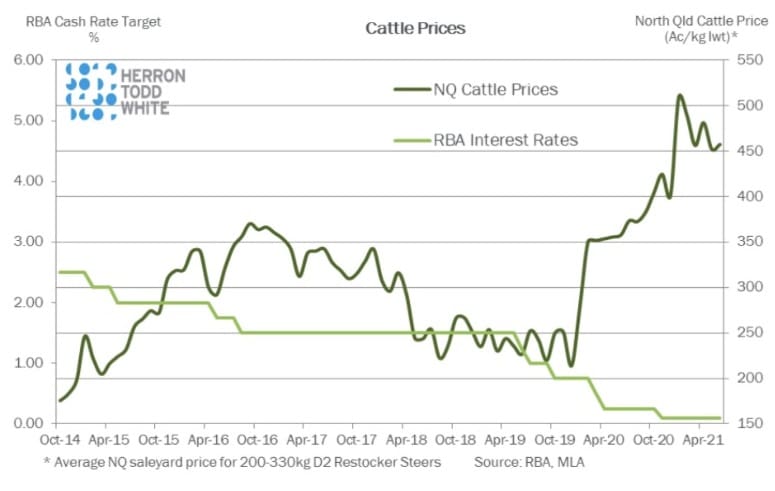 This graph shows the softening of the cost of capital (interest rates) from about 2.5pc in October 2014 to 0.10pc at present. Meanwhile the northern cattle market has increased substantially from February 2020.

Extensive grazing properties in northern Australia are strongly represented in listings, and selling well, with prices now exceeding the highs of the previous price benchmark period around 2008/09.

The reasons for this are many and varied according to Herron Todd White valuer Roger Hill, who notes that the northern Queensland cattle property marketing period is running late this year.

Setting the scene is the fact that La Nina didn’t eventuate in the north last summer, delaying the decision-making of local producers. Then, late rain in April and May gave the country a boost, immediately changing the market sentiment and convincing owners to list.

Mr Hill says property values cross the region have been tracking along with rising cattle prices over the past 12 months.

“The drivers for buying aren’t just land, grass, land condition or business fundamentals. They are now family succession, taxation and some limited FOMO activity (Fear Of Missing Out), mainly from motivated southern buyers who have returned to the market,” he said.

“A typical giveaway for FOMO market behaviour is when you hear someone say they want to buy country for a family member, because they don’t make land anymore,” Mr Hill said.

This time last year, all grazing property market districts in Queensland’s north and north west were equal to, or well above the previous cycle peak, with the average per hectare rate trading at a factor of 1.5 times (or 150 percent) the value rates seen back in 2008/09.

Mr Hill said higher cattle prices and a lower cost of capital have substantially driven property prices to much higher levels, with this year’s prices per hectare improving a further 15 percent, to as much as 25 percent in some districts. 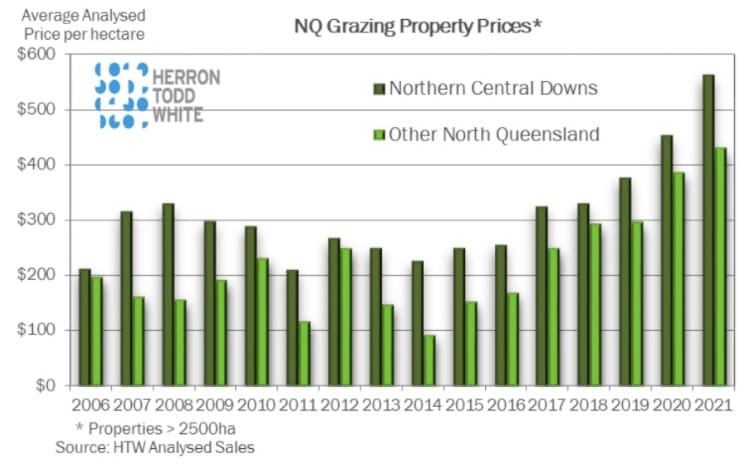 The combination of cattle market and cost of capital has been a substantial contribution to driving property prices to levels that are much higher than the last peak in 2008.

The above graph generated by HTW shows the market for North Queensland downs country has more than doubled since 2014 and the forest country has risen 150 percent since 2018-19.

In other words, the compounding growth rate has effectively doubled in the last three years. In some districts, forest country is selling for double that of the previous peak in 2008/09.

Mr Hill doesn’t believe the property market has yet peaked.

“I don’t have a crystal ball, but there is no reason for it to turn at this stage with expectations of another year of reasonable growth ahead.”

He said last year, there was a phase of euphoric buying when the cattle market rose dramatically, and property prices followed suit.

“It was an alarming rate of growth at around 40pc to 50pc which carried through to the start of 2021. In some standout acquisitions, the money paid was ‘silly’. By comparison, this year’s growth has been more sensible, improving by about 10pc to 15pc,” Mr Hill said.

“The market is still devoid of emotional activity. For instance, in north and north west Queensland, some recent purchases were expected to achieve higher rates per hectare, which didn’t eventuate.”

“Right now, there are one or two recent deals considered overpriced. However, when you scrutinise the transaction, you can understand why the purchaser in each case has paid that amount.”

“Sometimes this relates to good land condition, good fencing, and good water point distribution. Other times, it will relate to a higher and better use (for instance, the subdivision to provide starter blocks),” he said.

Remainder of the year

Mr Hill said the marketing period for this solid pricing season is not yet over.

“Later this year, natural capital income will be driven higher by carbon and biodiversity prices which are becoming powerful market drivers globally and nationwide.”

“Carbon projects will start to emerge in northern Australia, with several producers trialling them over the last five years. The carbon market is starting to mature and that will influence the different style of landholders paradigms.”

At present, landholders manage their land for cattle production because that it where the money comes from, however Mr Hill said the opportunity for including higher incomes from natural capital was increasing.

“So too will the paradigms shift, to benefit the land condition and secure those income streams. Ironically, achieving solid income streams from natural capital management, benefit the grazing business performance and its gross margins,” he said.

Given the global economic instability, Mr Hill said some investors would likely seek to hedge their risks against global and national inflation, and in doing that they will be seeking to tap into the natural capital market.

“These investors will need to lease or appoint managers to run the cattle business. This will be a complementary enterprise option designed and managed to develop and protect natural capital income streams.”

“A grazing sale could be viewed as ridiculous until you stand back and understand the price paid was for the country’s ‘higher and better’ use with the evolution or implementation of one of these schemes.”

He said the irony was that a buyer only has to pay $1 more for ‘higher and better’ use.

“When a substantially higher price is paid, I question the due diligence on its grazing value compared with what a producer needs to pay to acquire that property to implement a carbon credit or biodiversity project.”

Mr Hill warned that some of these new entrants could be doomed to fail by paying too much for a property at the time of acquisition.

“A considerable number of carbon or biodiversity status credits need to be sold in order to reclaim that big purchase price. At the end of the day, the transaction needs to make economic sense,” he said.