Shamrockvale, near Beaudesert in southeast Queensland, is the new home for the Goshu Fullblood Wagyu herd

IN ONE of the larger Wagyu cattle deals seen in the past 18 months, Victoria’s respected Goshu Fullblood Wagyu herd is shifting to Queensland, following its purchase by a wealthy Australian-based businessman who is just entering the Wagyu industry.

Behind the deal is prominent food service and logistics industry tycoon Robert McVicker, founder of the global firm Morris Corporation, which provides catering and logistics for military, mining and other large-scale work community customers worldwide. The United Nations and the US military figure among his clients.

New home for the Goshu herd is Shamrockvale, near Beaudesert an hour’s drive south of Brisbane, which Mr McVicker bought five years ago. At 1600ha or around 4000ac, Shamrockvale is one of the largest grazing properties in the Beaudesert district.

The holding has extensive irrigation along the Albert River frontage, including 800ac of irrigated cultivation which will now be converted from wheat/barley/corn to improved pasture. The property will comfortably carry 1200 adult equivalents in its current format.

Pub talk around Beaudesert is that Mr McVicker bought Shamrockvale for a figure around $12-$14 million. It is his first investment foray into the cattle and beef industry. It sold several years prior to that for an even higher figure, possibly as high as $18 million, at the peak of the property market back around 2007.

The Goshu herd sale represents one of the biggest investments in Fullblood Wagyu since the sale of the Kuro Kin herd near Scone in May 2016, and Gina Rinehart’s investments in the Green Hills herd in 2015 and a large line of Blackmore breeders last year.

Included in the Goshu deal is about 250 Fullblood cows plus their calves, and 50 bulls.

Goshu Wagyu was founded 20 years ago near Haddon, Victoria by industry pioneer Barbara Benjamin. She has specialised in breeding high Tajima content Wagyu cattle (noted for their high and consistent marbling performance, but smaller in frame score than other Wagyu strains). 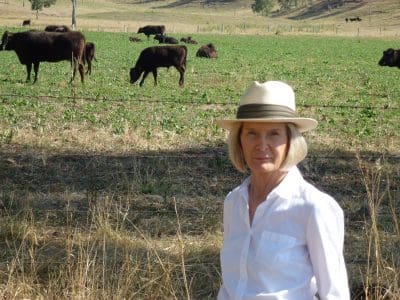 Barb Benjamin has bred up her Goshu Fullblood herd over the past 20 years.

Last year Goshu bulls sired the steer which produced the “World’s Best Steak” for exhibitors, Jack’s Creek, in the Global Steak Challenge held in the UK.

New owner Robert McVicker said Goshu had created a herd with a distinct, highly valuable and pure breeding pattern up with the best in Australia.

“Barbara has dedicated more than two decades to adapting Wagyu genetics to their environment and building a herd that would be impossible to replicate today,” he said. “Timing is everything in agriculture, and we believe this is the perfect time to evolve this highly successful stud, with Barbara’s continued assistance, to the next stage.”

“This purchase was not a cheap exercise, but we are convinced that it is worth every cent. The outstanding collection of independent carcase data from Goshu clients’ FI progeny is irrefutable proof that Barbara’s selection is second to none in producing some of the best Wagyu breeding stock in the country.”

Once settled at Shamrockvale, the herd will be expanded, and will ultimately produce both Fullblood bulls for sale to other breeders, as well as commercial feeder steers and heifers for longfed feedlot operations.

Livestock manager Chris Lahrs said the Shamrockvale property had the room and the scale to ramp-up the Goshu breeding operations. The property has recently been used primarily in a backgrounding role for feeder cattle, but would now embrace the Wagyu market in a significant way.

“We want to grow to sell perhaps 150 bulls a year, with the females retained in the herd to grow breeding capacity. It will take us three to four years, but ultimately we’d like to be running 400-plus Fullblood Goshu cows, producing bulls, as well as feeder stock.

The next four years would be mainly about multiplication, with a lot of ET work in the early stages.

Mr Lahrs said the decision to focus on Wagyu operations was made around the middle of last year, in an effort to move from more generic production into a high-value niche.

“The Wagyu market may fluctuate in future, but we think it will not fluctuate as much as the broader cattle market, for the right cattle,” he said. “Our vision is to continue to heavily invest to ensure we are international market leaders in our breed.”

Mr Lahrs said discussions with Mrs Bishop started some time back, and eventually moved from simply buying a line of breeding cows to the complete herd purchase, once the relationship was established, and it became evident that she was at a stage where she was ready to pull back.

Ms Bishop will remain in a consultancy role for some time.

“We’ve already found that anybody we’ve spoken to in the Wagyu industry has been willing to share information, discuss, and give their opinions. There’s no ‘closed shop’, and people have been very helpful,” he said.

The Goshu Wagyu females are descendants of one of the most famous meat quality bulls in Japan, Tajiri, born to Fukue-Go in 1939.