Three meat processing plants hit the market – What’s behind it?

THERE’S been an unusual confluence of three meat processing assets being put to market across Australia this month.

The three abattoirs, located in Queensland, New South Wales and Western Australia, all appear in advertisements running on Beef Central this week.

But while it might be logical to simply conclude that the current extreme high livestock prices and consequent lack of profitability in processing is to blame for the listings, as is often the case, there are a range of explanations for the unusual trend.

Beef Central has put together this quick snapshot of the three plants currently on the market, and the reasons behind them being offered for sale:

The former Lachley Meats abattoir at Forbes has not processed cattle for quite a few years. The site was sold twice – including once to a Chinese company, and once to veteran processor, Joe Catalfamo from Tasman Group – before being taken over by the current owner.

At one point a lot of the refrigeration and coldrooms, beef chain and other internals were stripped out and sold, but a subsequent owner later bought similar equipment from southern Queensland’s now defunct Killarney abattoir, and shipped it south. That equipment, kept in storage, is now included in the current deal.

The current owner, an Australian company, has held the asset for the past four or five years. During the past three years, unsolicited approaches have been made from both Australian and overseas interests to buy the asset, pictured above. “At least ten interested parties have had a really serious look at it – roughly equally split between Australian and overseas interests,” marketing agent Ian Simpson, from Ian Simpson & Co told Beef Central.

“Of those, perhaps half were interested in making good the site as a functioning abattoir using the existing buildings and internals from Killarney, while the other half had a view to demolish and start again with a brand new plant,” Mr Simpson said.

At least one of the foreign interests was from Korea, looking to partner with an Australian shareholder.

“It would be a great boost to the Forbes community if a new owner with vision took the project on, and re-established meat processing on the site,” he said. “Forbes Shire Council is behind it 100 percent.”

The vendor, an interstate company which has other interests in the livestock industry, had now decided to put the asset on the market, to firm-up that underlying interest.

The site is well-located on 170ha of land, just 8km from the large CWLX Forbes livestock selling centre, and on the Newell Highway and railway line, close to Forbes. Stock yards, ponds and office infrastructure are all intact.

The Geraldton Meat Exports smallstock plant near Geraldton, WA was placed on the market last year, and has just recently been re-advertised for sale.

With a capacity of around 2000 sheep, lambs or goats a day, the facility is a modern Tier Two export licensed plant that has undergone several upgrades since 1995. The plant has been closed for seasonal shutdown since June, 2015.

One of the reasons for the closure has been livestock supply, beef Central was told by WA processing sources,  with goat numbers in the area dwindling, partly due to wild dog predation. Sheep have also become harder to find, as more local farmers in the region have moved out of dedicated livestock into cropping.

That trend had now started to turn again, however, with high livestock prices and greater use of livestock (both sheep and cattle) on crop stubbles, and via lotfeeding operations, we were told. 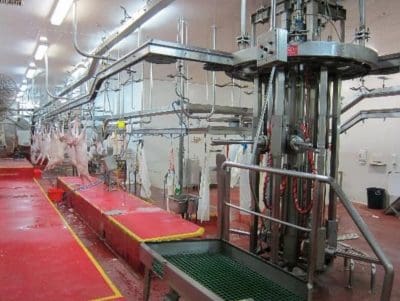 The site has processed up to 200,000 rangelands goats a year, sourcing out of the Gascoyne, Pilbara and surrounding areas. Interest in exclusion fencing is growing, suggesting goat numbers may again start to re-establish across the region.

Conversion to a large animal chain for beef was another prospect raised in discussions, to tap into stock from further north in the state’s pastoral zone. The plant’s location 500km north of Perth could add to that attraction.

The Geraldton site at one point had good regular supply contracts for Halal-certified goatmeat into Malaysia and other southeast Asian destinations.

The facility is well equipped with chiller and freezer capacity, and has a modern slaughter floor. It has been well-maintained and is more or less ready to recommence processing.

A small domestic and service kill abattoir at Sarina, just south of Mackay in North Queensland, has been placed on the market through PRD Nationwide.

The 60ha site, just off the Bruce Highway, is ideally situated to continue operations as a small-scale meat processing plant. Agent Jan Aylesbury from PRD said the holding would ideally suit a beef producer looking to vertically integrate their business, and establish a domestic branded beef program.

The facility has done service kills in the past, and for some years provided a kill for cattle from the the large Lotus Park feedlot near Marlborough.

The site includes freezing and chilling infrastructure to cater for 40 bodies of beef a day, and a separate small stock chiller. A rendering plant includes a dual fuel boiler, serviced by either diesel or tallow.

Other infrastructure includes receival yards at the plant and a second set of steel cattle yards in the paddock; four-bay machinery shed; and a bore with a commercial license to supply the plant.