More calves, an extra $116 per head for steers during severe drought and delayed supplementary feeding by one month are just some of the improvements beef and sheepmeat producers in the inaugural Meat & Livestock Australia (MLA) Challenge have achieved in the third quarter of the competition.

Windorah beef producers Andrew and Megan Miller’s decision to wean early resulted in greatly improved condition in their cows for joining, and the Millers expect the decision to result in up to 60 extra calves on the ground at the next calving. 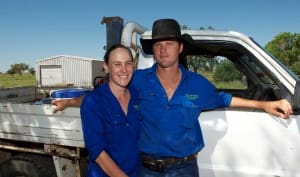 In spite of the drought conditions, the Millers also added $116/head value to their sold feedlot steers, thanks to detailed planning and assessment of the starting value, feed price, daily weight gain and likely sale price.

“The difference now that we are part of the MLA Challenge is that we’re improving our skills required to farm in an extremely variable climate,” said Mr Miller.

“We are making more informed decisions after finding the information we need, talking each major decision through with our mentor, and then committing to it. We feel in control, able to consider our options and make choices, even when the conditions are unfavourable.”

Their achievements have seen the Millers lead the third quarter of the MLA Challenge, the results of which were announced today. They were followed by sheep producers John and Annie Ramsay from Bothwell, Tasmania; sheep producers Marcus and Shannon Sounness from Amelup, Western Australia; beef producers Matthew and Angela Pearce from Adelong, NSW; beef producers Bill and Georgia Wilson from Edi Victoria, and beef producers Lachlan and Anna Hughes from Dulacca Queensland.

All six participating producers have seen improvements in their businesses since joining the MLA Challenge which has focused on improving their management skills and using tools and evidence as the basis of decision-making.

In Victoria, Bill and Georgia Wilson used MLA tools including the Feed Budget and Rotation planner and Feed Demand and Stocking Rate calculators to carefully manage and monitor their grazing.

“Using the MLA tools meant we were able to delay supplementary feeding by at least a month, which is a huge saving to our business,” said Mr Wilson.

In Western Australia, Marcus and Shannon Sounness worked with their MLA Challenge mentor to improve human resource management so they can attract a stable labour force before expanding their livestock enterprise.

“We have developed clear roles in the farm business, based on our individual skills, and now the whole family is on board with the business plan and working for the same outcomes,” said Mr Sounness.

MLA’s General Manager Livestock Production Innovation, Peter Vaughan said that the third quarter of the MLA Challenge has seen the six families make the most of the information, tools and resources available to them, along with the advice of their mentors, to plan and make business decisions.

“Three quarters of the way through the competition, the Challengers are really appreciating that while they can have little influence on the end prices, they do have significant scope for reducing their production costs,” he said.

“The judges are very impressed with the way that all six participants are planning and working through their decisions, based on the evidence and information available to them. All producers have improved their skills in measurement, tracking and analysis, and their efforts are paying off.”

The MLA Challenge is supported by Woolworths, Westpac Agribusiness and QantasLink. For more information about the MLA Challenge, the six farming families involved and the resources they are using, visit www.mla.com.au/challenge.