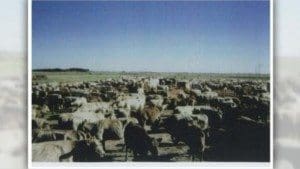 A picture of the cattle culled by an RSPCA officer near Warnambool in 2003.

The RSPCA says it is considering its legal options after it was ordered by a court this week to pay $1.4 million to the owners of 131 purebred cattle ruled to have been wrongfully culled by an RSPCA officer in Victoria 12 years ago.

As reported by Channel Nine news this week, cattle breeders James Holdsworth and Heather Ellison successfully sued the RSPCA after 131 Murray Greys were shot while on agistment at Framlingham near Warrnambool in 2003.

The court heard that RSPCA officer Jason Nicholls believed the animals were emaciated, abandoned and neglected and, with the assistance of others, put down the animals without the knowledge of the owners, who were in NSW at the time.

However, the County Court Judge John Bowman found that while the cattle were lean to very lean, they would have recovered.

He found that Mr Nicholls acted in haste, possibly out of a desire to avoid confrontation, or because he was obstinate or impatient.

According to the Channel Nine report, Mr Nicholls survived being shot in the face by a farmer while inspecting mistreated sheep in 1999.

The plaintiffs in this case argued he should not have been reinstated doing field work with the RSCPA.

Barrister for the plaintiffs Peter Berman said, “The poor man was suffering from depression, post-traumatic stress after being shot. They allowed him to carry a rifle to perform duties he was clearly unsuited for. Then they tried to disown him by distancing themselves from him and let him carry the whole proceeding himself.”

Mr Holdsworth and Ms Ellison said they had been devastated by the cull, and estimated their loss of profit, including artificial inseminations, to be in the millions.

The court also heard that the RSPCA also unsuccessfully criminally prosecuted the pair.

A spokesperson for the RSPCA in Victoria told Beef Central that the association is considering its legal options.

“At this early stage, it is a 125 page ruling, we are working through it and waiting on legal advice so we are still at that stage.

“We have a month to respond and we’re going to utilise that time to review everything before we respond.”