A remote-controlled cattle crate made at Connors Welding Works in Gracemere for Colin Dunne, from Duaringa in Central Queensland. Click on image to view in larger size.

Climbing over crates to load cattle isn’t as easy as it once was for Colin Dunne, but until recently, manually operating the gates was his only option.

But the Duaringa grazier has a remote for his TV, a satellite for his tractor and an air-operated cattle crush; so he didn’t see why he couldn’t get an automated cattle crate as well.

So he came up with an idea to make loading cattle easier and safer, and is now using that automated technology on his new cattle crate and grain trailer. 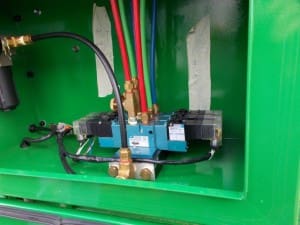 Air valves on an automated cattle crate made by Connors Welding Works in Gracemere, for Colin Dunne from Duaringa.

Designed and built by the team from Connor’s Welding Works in Gracemere, doors on both the crate and the trailer are now remote control operated.

The team also installed a set of automated handrails one-metre high which rise on top of the crate whenever someone lifts the panel which covers the ladder to the top.

“I approached Bruce (Hunt, co-owner of Connor’s Welding Works) and told him what I wanted and asked him if we could have a remote for sliding gates on the truck, and he said, ‘I can’t see why not,’” Colin said.

The remote control works up to 200m away from the truck, and each button operates a separate air valve on the doors that regulates the speed of the doors.

Bruce said the biggest task was making sure the pressure of the valves was correct. “If the doors close too hard it could hur t a beast,” he said.

“We could only have a door moving at a speed a hand could push it. “If it closes too hard and a beast is halfway through it, there’s going to be damage… it needs to stop and hold it.” 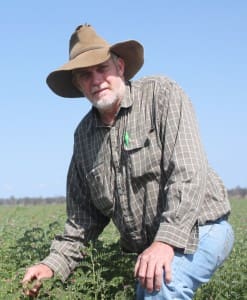 Colin said the crate is just another tool to make life easier on the farm.

“It’s alright for the young fellas to jump up on the trucks… but it’s so much nicer to sit back on the ground and just press a button,” he said.

“You still have to be able to chase cattle and hunt them up from A to B, but when they’re there instead of having to lean over and push the gate (you push a button).”

They started work on his truck so he didn’t have to stand near it when unloading grain, and took it a step further when building the stock crate.

“He’s very much a forward- thinker,” Bruce said of Colin. “No one’s ever done it before, but I see no reason why you can’t.”

Colin said this technology makes it easier and safer to load cattle and stops people from “dangling off the truck”.

“If it saves someone from falling off the side of a truck or something, it’s worth it,” he said.

The Dunne family has been in the Duaringa district since the 1870s, and Colin has lived on his 12,000 hectare proper ty, Sorrell Hills, his whole life.

Bruce said they were now considering installing the handrails on every crate they sell, and he expects it to become a workplace health and safety requirement.

Click on images below to view pictures in larger format