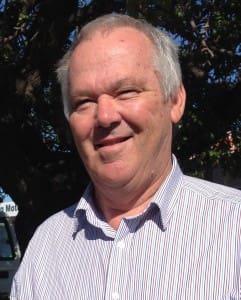 North Queensland beef cattle researcher and veterinarian Lee Fitzpatrick has been named as the new chairman of the North Australia Beef Research Council.

Dr Fitzpatrick will begin his three-year term at the end of October, following a hand-over period with out-going chair Ralph Shannon, who is standing down after four years in the role.

“This document, prepared by NABRC under the leadership of Ralph Shannon, sets out a roadmap to delivering the future RD&E needs of the northern sector,” he said. “I did not want to see this work sit on a shelf; I want to see it implemented which is why I put myself forward for this role.

“Importantly, Meat and Livestock Australia (MLA) has recognised the high quality of the research and the thorough planning that has gone into this strategy, and is now working closely with NABRC in determining its RD&E investment priorities for the north.”

NABRC is an independent advisory body made up of producer representatives, research organisations, education providers, and State farming organisations. Its role is to provide leadership and advice to organisations which invest in or undertake beef cattle RD&E in Queensland, the Northern Territory and the Pilbara and Kimberley regions of Western Australia.

Dr Fitzpatrick brings to the role more than 40 years of experience in the beef industry, with much of that time spent working in tropical North Queensland in roles including as a private vet, research scientist and as the foundation Dean and Head of the School of Veterinary Sciences at James Cook University.

“Facilitating effective communication between beef producers and a range of relevant stakeholders has been a significant part of my roles throughout my career,” he said.

“This will assist in building an effective collaborative partnership between NABRC’s 11 regional Beef Research Committees and industry bodies and research organisations.”

Dr Fitzpatrick praised Mr Shannon for his work as NABRC chair, and his leadership in delivering the Priorities Prospectus.

“NABRC would not be in the position it is today as the leading voice for setting the RD&E priorities for the northern beef industry if it were not for his great leadership,” he said.

Mr Shannon is now looking to work with industry in developing a similar model for producer and researcher engagement in southern Australia.

“The success of NABRC has been very much a collective effort and I have been fortunate to have been at the helm at a time when developing the northern Priorities Prospectus was something we needed to do together,” he said.