An Australian made product has joined the emerging list of feed supplements designed to reduce methane emissions from livestock.

The Perth-based startup behind the product says its technology represents a significant leap forward, because it reproduces the methane-reducing bioactive contained in red seaweed, but via a pharmaceutical process that is more efficient and scalable to produce without requiring large seaweed harvests. 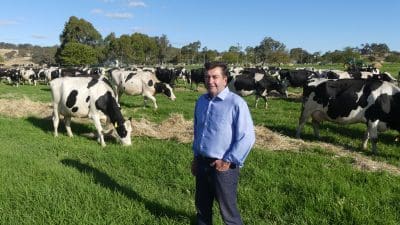 But instead of harvesting and extracting them from plants, they have developed processes to reproduce the compounds through what they describe as a highly efficient, low cost, scalable, and high-quality process to feed to livestock in order to reduce their emissions.

The company’s most advanced product reproduces the bioactive contained in red seaweed (Asparagopsis) which has been shown to reduce methane production in livestock rumen by up to 95 percent, whether in liquid, solid or slow-release dose formats.

Rumin8 says it expects that its products will have significant productivity benefits for farmers as energy normally lost to methane production is instead converted into higher growth rates.

To date the company is relying on laboratory tests to supports its claims, but it is understood animal trials have also been underway with sheep results expected soon and a cattle trial to be held later this year.

Trials of Rumin8’s first product at the University of Western Australia reduced methane production by more than 90% by Day 3, with almost total elimination by Day 5.

The trials were also used to identify optimal dosing rates to achieve the required reductions in methane emissions.

Methane-reducing bioactive compounds in plants such as red seaweed are volatile and evaporate easily, but the company says it has developed a way to stabilise the compounds in a feed supplement.

“This breakthrough provides Rumin8 with the ability to develop a scalable, consistent, cost-effective livestock supplements, which are inspired by nature, but have the potential to decarbonize the global livestock industry while providing productivity benefits,” Rumin8 Managing Director David Messina said.

“The identification of Asparagopsis’s anti-methanogenic properties was a game changer in terms of reducing methane emissions from ruminants. Rumin8’s product will be able to be produced in a consistent, repeatable, manufacturing process which will be effective at reducing methane production and is expected to be significantly cheaper to produce and provide much more reliable dosing and outcomes.”

Mr Messina said the diversity of farming systems used to grow animals does prove a challenge for methane reduction which has proven difficult to solve.

“We are developing a range of formulations which can be delivered to both feedlot and grazing animals,” he said.

Rumin8 is now partnering with the University of Western Australia, University of Melbourne and the WA Department of Primary Industries and Regional Development to assess the repeatability of the laboratory trials in animal trials in 2022.

“We have every confidence that just as we were able to replicate the success in the lab, we can do the same with our field trials,” Mr Messina said.

“We’re also confident that there will be productivity benefits – increased growth rates or milk production – for farmers who use Rumin8 products. It would be an optimal outcome if Rumin8’s products to reduce methane emissions from livestock and are paid for through productivity gains.”

The Rumin8 board comprises a mix of skills from the agriculture, pharmaceutical and clean technology sector.