A MULTI-FACETED approach, rather than any single ‘silver bullet’, is likely to be the solution to methane reduction in cattle, the TropAg conference in Brisbane was told yesterday.

Trop Ag attracted more than 700 delegates from 41 countries in tropical and semi-tropical regions of the world, covering livestock, field cropping, horticulture, nutrition and related fields. By 2050, some 50 percent of the world’s population, and 60pc of its children, will reside in the tropics, the conference opening heard.

Professor Richard Eckard from the University of Melbourne addressed the conference on the potential for methane mitigation in ruminants.

“We know that livestock industries are under pressure to reduce their greenhouse gas emissions, and there is an increasing challenge to the industry’s social license as a result,” he said.

The Paris agreement had set a target for carbon neutrality by 2050, and a number of governments and businesses were starting to comply.

Around the world, responses are occurring to that. In Australia MLA two years ago launched its 2030 carbon neutral initiative, given the right R&D and policy settings as a strong caveat. A number of livestock companies in Australia now offered carbon neutral beef products, including NAPCo’s Five Founders and Arcadian Organic. Most of these were buying international carbon offsets – not actually dealing with the issue of methane production.

However Prof Eckard outlined a number of approaches emerging that had potential to lower methane emissions in cattle, including:

“We’ve known for a long time that tannins can reduce enteric methane production in cattle. A number of legume forages were known to contain tannins. 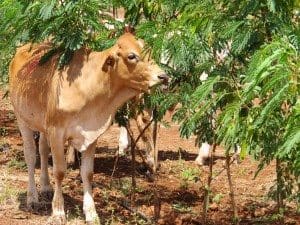 “We started with black wattle – probably the most astringent tannin we could find, but we also know that the browse legume leucaena, for example, contains tannins, and CSIRO is looking at leucaena’s potential to reduce methane emissions,” he said.

In southern Australia, work on lotus, a temperate legume also containing tannins, had shown a reduction of up to 20pc in methane emissions.

Prof Eckard emphasised that there were some caveats, in that responses were variable when concentrations in the diet was low, and there could also be restrictions on intake and digestibility when there was too much tannin in the diet.

Work had also been carried out looking at the impact of oils, including dietary fats and lipids, often sourced as by-products from other industries – in methane reduction. One analysis showed that for every 1pc of fat added to an animal’s diet, there was a 3.5pc reduction in methane. That relationship was now one of the offset methods being explored in Australia.

Sources of oils might not come only from by-products. Research in New Zealand was looking at high-lipid grasses which could contribute to methane reduction.

Some research also looked at grape marc (the residual product of skins, seeds and pulp left after grapes are crushed for wine production), which contains both tannins in the skin and oil in the seed.

“Prior to this work (and the drought) grape marc was a disposal problem for the wine industry. Now, it is completely sold out, mostly to the feedlot industry. So we know that putting tannins and oils together does have an impact.” 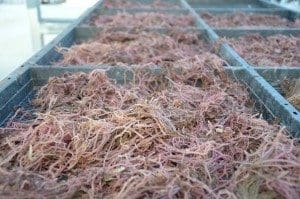 Experiments in cattle and sheep have shown feeding dried and ground red algae reduced methane emissions by up to 80 percent.

Prof Eckard said some very impressive results had been produced by a CSIRO team and others around the world. In live animal trials, 80pc reductions in methane had been recorded in sheep, and up to 90pc in laboratory trials using the seaweed as a methane abatement option.

“There are some issues still to be explored, because the algae does contain a bromoform halogenated compound, meaning more work needs to be done on the acceptability of that in the food chain. But again, it gives us a window that these changes are possible.”

Occasionally in science and research, something comes along that looks like a silver bullet, and right now, a new man-made rumen modifier compound designed to suppress methane production produced in Europe was doing that, Prof Eckard said.

The compound, 3-nitrooxypropanol (3-NOP) is being produced by DSM Nutrition and going through registration in the European Union right now.

Beef Central wrote about the development of this compound in this recent story. After one trial in Canada, efficacy declined after it was fed for 300 days in a feedlot trial, however.

“Those of us who have been in research for a long time are cautious about silver bullets, but right now, it does look to be a fairly impressive compound. In theory, it blocks the production of methane in the rumen,” Prof Eckard said.

“When it is mixed into diets, its efficacy can be reduced, because it has to be present in every mouthful of feed. That might work well in a feedlot environment, but for extensive grazing systems, slow release technology might be necessary,” he said.

“But watch this space as this product comes through registration next year.”

Prof Eckard said one area that he felt had been missed in the field of methane mitigation research so far was what he called early life programming.

“There is a maternal influence on the microbial structure of the animal, post weaning. We know that it works in humans, and ruminants – and nutritional intervention in early life of a ruminant can lead to a modified structure of the rumen bacteria.”

“This is something that we should be looking at in methane reduction, because it also holds potential for cattle in the developing world, as well as developed countries. Using products like red algae or feed additives like 3-NOP, may to train animals to be low methane emitters, and then see if that perpetuates through generations. It’s a prospect for the future that we need to look at.”

Prof Eckard said methane vaccines had already been under study for about 20 years.

“This is the point. These things are not short term solutions – they have to be subject to long-term research programs for solutions to come through.

“We know that certain proteins are known to be methanogenic in ruminants, and we also know that saliva can produce these antibodies, which is the mechanism by which it comes into the rumen. The research into this is still going on through AgResearch in New Zealand. We’ll wait and see.”

Prof Eckard said there were others means of reducing methane emissions, simply by removing unproductive animals from the herd.

Audits of livestock production systems often find unproductive animals, either through health or management reasons. Simple things like extended lactation that allowed a manager to change the number of replacements required in a dairy herd, could improve not only the emissions intensity, but the absolute emissions of those systems, he said.

Prof Eckard said there was evidence that the extent of methane emissions per unit of dry matter intake varied from animal to animal, and were heritable.

“There are some issues we still need to think through, though, because breeding for an absolute reduction in methane may be simply breeding for passage rate of material through the rumen. While that might suit more intensive feedlot systems, it would not suit extensive rangeland systems that need a strong functioning rumen to extract nutrient from poor pastures.”

He said there appeared to be a range of options to the industry for addressing the methane reduction challenge.

“The industrial sector has a range of clean energy technologies coming through, and the livestock industry may have a future which involves a low-methane ruminant. We definitely need more research around these low-cost, sustainable, heritable type mechanisms like early life programming.

As livestock were integral to a lot of developing economies around the world, he said methane abatement in ruminant livestock was a global priority.

“But methane abatement cannot be addressed in a typical three-year funding paradigm,” he said.

“These things cannot be solved with any less than 20-year research programs, and we fool ourselves if we think we can do otherwise. It also lends itself to global collaboration, bringing scientists together to address these issues.”