HARVESTING high moisture corn for feedlot use is paying off for historic northern NSW cattle operation, Yulgilbar Station, as part of its cash cropping enterprise running alongside its Santa Gertrudis commercial and stud cattle operations.

Yulgilbar was established at Baryulgil in 1840 and has been in the Myer family for more than 60 years. 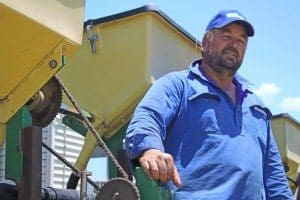 Tooloonki division manager Chris Lahrs, Tabulam, is harvesting corn at high moisture for use as silage at the nearby Whyalla feedlot.

The beef and stud cattle operation runs 4000 head of cattle and a 1117ha cropping program to produce fodder to fill feed gaps, while the company’s Tooloonki division, located 50km north at Tabulam and purchased in 2006, produces grain for cash flow.

Tooloonki division manager Chris Lahrs, who handles the cash-cropping side of the business, said harvesting corn at 30 percent moisture soon after black layer allowed them to get their paddocks back weeks earlier, resulting in more favourable planting windows.

With Tooloonki double and sometimes triple cropping paddocks, this has made a huge difference.

“The grain goes from the header to the truck and straight to one of the country’s largest feedlots, Wyalla, near Texas, which means no double handling or drying costs,” Mr Lahrs said. Whyalla is hoping to put down 40,000 tonnes of corn silage each year.

“With its price-to-weight ratio comparable if not better than that of the traditionally grown gritting corn, it is currently a win-win situation.”

A couple of weeks out from this year’s planting, Mr Lahrs hopes to replicate last season’s success with PAC 727 and high moisture corn that yielded 13.5t/ha.

“Corn is a good fit for Tooloonki, with its proximity to markets good rainfall and alluvial soils on the Clarence River allowing us to produce a large quantity each season,” he said.

“We plant dryland on the back of rain with December storms and generally get good follow up rain in January and February.”

Tooloonki is using new Imidazolinone tolerant (IT) variety PAC 727IT on their second planting this year due the crop following the use of Spinnaker in the pre-emergent spray on the spring Adzuki beans.

This would normally mean putting the paddock back to beans, but the PAC 727IT variety allows them to grow corn with no residue effect.