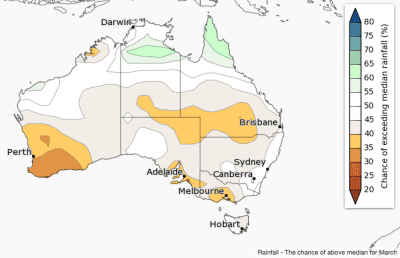 Chances of above average rain during March. Source: Bureau of Meteorology. 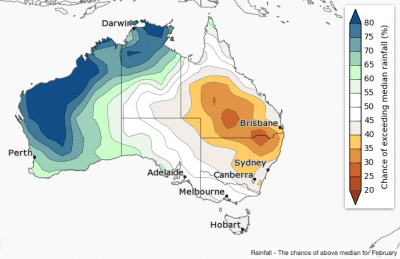 Chances of above average rain during February. Source: Bureau of Meteorology. Click on maps to view in larger format.

What happens in the next month or so is likely to have a significant bearing on the rate of herd recovery across eastern Australia this year.

This week Beef Central spoke to livestock agents from north-western Queensland to Victoria, an area covering about 75pc of Australia’s beef cattle herd, to get a sense of how actively producers are focusing on herd rebuilding in key production areas.

In areas where herds were not as badly diminished by drought, a number of factors also appear set to inhibit rapid herd growth, including the short supply of breeders following big female kills of recent years, the continued competition for females for processing and the high price of breeding replacements.

Here is summary of what livestock agents had to say region by region:

“While it is a good season now, the most important rain we can get is March rain,” Mr Dowling explained.

“People will rebuild here when they get the opportunity, and that will be very dependent on what happens with the weather pattern over the next two months.”

North western Queensland has enjoyed a much better seasonal start than further south around Longreach (more on that region below), but much still hinges on rain between now and the end of March.

“If we get good March rain, it will set people up for the year,” Mr Dowling said.

The general area east of Richmond to Winton towards Charters Towers and Hughenden remains light on and short of rain, Mr Westaway said.

But producers in areas which had received rain were definitely focused on retaining and joining heifers.

Mr Westaway said there had been very little purchasing of females for restocking in the region, but many producers still had a solid base herd from which to build, and were looking to breed their way back up again.

“A lot of herds definitely were diminished, but they still have significant numbers to rebuild with.”

Easily one of the worst affected regions in the long-running drought was Queensland’s Central West, and in particular Longreach where many properties were totally destocked.

Despite a good break in winter, the limited and patchy nature of summer rain since has left many properties delicately balanced on a seasonal knife’s edge.

“I don’t think you will see any herd rebuilding here.

“We will try to, but if it doesn’t rain by the end of February, we will be back to square one.”

Some heavy falls last winter had blanketed the country in pigweed and herbage, but the Mitchell grass has had to regenerate from seed and its response in some areas has been very slow.

“They are scared of walking into another one,” he explained.

“People wont feed this time, they will sell.

“We need summer rain and heat in the soil to make this Mitchell grass fire.”

The CQ herd did not diminish as much as numbers further west, Mr Kenny said, making the path back to more usual herd numbers not as great.

He also described the current season as patchy, noting that while a lot of properties had grass, albeit grass that was starting to hay off, an emerging problem in the region is water.

“A lot of people have got dams drying up and running out of water,” he said.

“They had good grass rain but no water rain.”

The high price of females, driven up last year by strong store and prime market rates and the boat trade, which had all increased the splitting value of cows and calves, was also limiting the amount of breeders being bought back into the region.

In a similar story to Central Queensland, herd numbers in the Roma region had not been as significantly reduced as in the State’s Central West, Mr Turner told Beef Central.

“They are building their numbers again, but it is nothing like on the scale of what is going on in areas like Blackall.

“Some producers here came back to 30-40pc destocking when it was really bad, but a lot are buying cows and calves and breeders here at the moment.”

Seasonal conditions vary dramatically across the region, from properties near Taroom with two-foot-high buffel to east of Wandoan that are near desert like.

“A lot of blokes are enjoying the most magnificent season around Blackall and Tambo, but there are also places around Blackall where it has just dried out again so people have put the brakes on with their restocking,” Mr Turner said.

“For everyone chasing breeders there are a lot of people chasing small cattle just to put on for a turn.

“There are plenty chasing but not really hooking in and buying big numbers yet, they just wants another confirmation that the season is going to be positive.”

In NSW’s Central West numbers were not dramatically depleted but to make up numbers restockers have been purchasing heifers out of the prime market to breed on with, Mr Monk said.

“This is due to the shortage of ideal store cattle which is traditionally where they would have purchased their replacement heifers,” he explained.

“The shortage of ideal trade cattle will continue I feel while the good seasonal conditions continue, so this is making it fairly difficult for both the breeders and fatteners to purchase replacement stock, which is keeping a good floor in the fat market for anything suitable.

“I am aware that towards the end of last year some of the far western people did venture over to Western Australia when their market was depleted.

“There were also some Victorian buyers over there in the West but I think their market has caught back up to ours now.”

A good season in Southern NSW and northern Victoria is contributing to herd expansion, but high prices mean a lot of females are still going onto feed destined for meatworks.

Mr Corcoran said that despite some dry years the region did not endure the same massive droughts as northern New South Wales and Queensland, and as such had not experienced the same herd reductions.

However, he said the large numbers of female cattle still going to backgrounding for feedlots or straight into feedlots would limit herd expansion.

Yardings at recent future beeder sales in Victoria, held for the specific purpose of selling female cattle to the breeding trade, were down by about half on traditional numbers.

“That tells you a lot of those suitable heifers that joined this time last year that have got their heads off, so that will subsequently keep a lid on our region’s numbers,” he said.