DPIRD research scientist Dr Daniel Real lays out more than 100 first cross seedlings at Kununurra, as part of a trial to breed a new variety of sterile leucaena suited to northern WA.

THE first seedlings from a research project to develop a sterile leucaena variety were transplanted at secure sites at Carnarvon, Broome and Kununurra recently.

The Department of Primary Industries and Regional Development (DPIRD) is working on the plant breeding project to develop a leucaena variety that is sterile or without seeds, which poses much less weed risk to the environment.

The project has co-investment from the Meat and Livestock Australia Donor Company and has partnered with Murdoch University and New Mexico State University.

Leucaena is a genetically diverse Central American legume fodder tree with many species, including Leucaena leucocephala, which is grown for cattle feed in many tropical and sub-tropical regions of the world, such as Queensland. 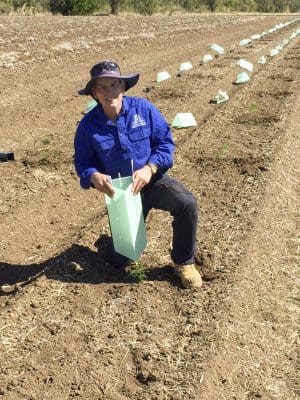 “Over the past 18 months department plant breeder Daniel Real has made more than 1000 crosses from 11 different species of leucaena in the department’s South Perth glass house to create 130 hybrid lines.”

The breeding strategy used to create the new lines is based on the ploidy level – the number of pairs of chromosomes in the cells of the plant – which differs between leucaena species.

“When a tetraploid is crossed with a diploid, triploid progeny is created, which is typically sterile or has much reduced viable seed.

“More than 300 new triploid plants were divided across the three Western Australian trial sites, alongside some additional accessions from Queensland used as controls and established using irrigation.”

The department worked closely with Murdoch University to confirm whether the crosses were successful.

Dr Revell said the next stage of research over the next 18 months would examine whether the seedlings flowered and produced viable seed.

“The diversity of growing environments across the sites will also give us an opportunity to measure the effect on plant growth,” he said.

“The plants will be evaluated for their ability to recover after cutting to simulate grazing, as well as drought tolerance, feed quality and growth habit.

“These are the first steps in the process of developing a new leucaena variety and there will be other challenges to meet in coming years before it becomes a commercial reality.”

For more information about the sterile leucaena project visit the DPIRD website agric.wa.gov.au