Browse legume leucaena proves its worth across Northern Australia

The Central Queensland based Fairview Liveweight Gain Trial concluded last month with the final weighing of 100 trial steers and subsequent sale of a large proportion of the cattle through the CQLX Gracemere Special Weaner and Feeder Sale on 31 May. 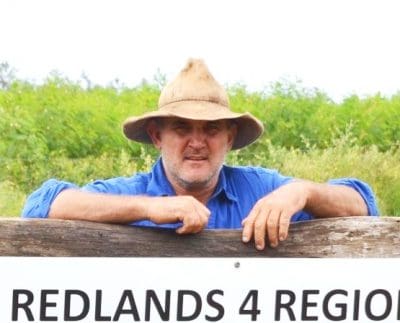 Brett Blennerhassett of Goshen Station looks over his Redlands leucaena

The Fairview trial was organised and hosted by Bruce and Lucinda Mayne with cattle supplied by neighbouring properties Calliope Station, Voewood Brangus and Wycheproof, and supported by the Leucaena Network, DAF and agronomist Ross Newman.

Animals recorded an average weight gain of 0.68 kg per day and a weightgain per hectare of 145kg over the 361 days of the trial. This compared favourably with the gain of 0.56kg per day and 107kg per hectare for the control group grazing tropical native pastures with access to some areas of ponded pasture.

“The comparisons with the improved pasture weightgains were possibly not as significant as expected due to the inclusion of ponded pastures in the grass-only trial and the higher quality feed provided by the hymenachne and para grass,” trial host Bruce Mayne said.

“We believe that the weightgain differences comparing leucaena with native coastal pastures would have shown a more dramatic difference, and further demonstrated the potential of leucaena – perhaps something for a future trial,” he said.

“The overall weightgains demonstrated by the cattle on leucaena have certainly shown that the inclusion of the browse legume can significantly improve a property’s carrying capacity and pasture quality,” Mr Mayne said.

“Achieving weightgains of 246kg per year in relatively poor coastal country is quite impressive.”

Seventy-seven head of the trial cattle were sold at the CQLX Special Weaner and Feeder sale on 31 May, with the leucaena pastured cattle achieving an average sale price of $1762.

The Northern Australian Liveweight Gain trial, organised by The Leucaena Network and supported by Meat & Livestock Australia, measures liveweight gains achieved on leucaena-grass pastures at three properties across far north Queensland and the Northern Territory over a period of three years.

The first twelve months of the trial has recorded improved liveweight gains from leucaena-grass pastures compared to native or improved pastures at all three sites located at Goshen Station, Mount Garnett and Pinnarendi Station, Forty Mile, both in far north Queensland, and at the Douglas Daly Research Farm in the Northern Territory.

The most significant improvements have been recorded by Brett and Theresa Blennerhassett of Goshen Station, who have 250ha of Redlands leucaena as part of their grazing operation, with an additional 160ha currently undergoing establishment.

Improved pastures of bisset, Rhodes grass, urochloa, seca stylo and buffel form the inter-row pastures.  The station’s native pastures, augmented with a mix of Callide Rhodes, bisset bluegrass and seca stylo, average a daily liveweight gain of 0.3kg throughout the year, so the liveweight gains ranging from an average of 0.52kg to 0.7kg per day, with the annual average daily live weight gain of 0.59kg provide a significant boost for Goshen’s carrying capacity and rate of turnoff.

“It’s a no brainer -we believe Redlands leucaena is the pathway to turning off our steers and heifers 6–12 months earlier,” he said.  “It’s all about weight-for-age in northern beef.”

“You want to own these cattle for the least amount of time, but it’s also about getting into a situation where you have some resilience when the harder times and drier seasons come.”

Consistent liveweight gains were also demonstrated at the other trial sites at Pinnarendi Station and the Douglas Daly Research Station.

Pinnarendi Station hosts the DAF-run trial, comparing not only the liveweight gains between leucaena and an improved pasture paddock (buffel grass with seca stylo), but also weightgains between the psyllid-tolerant Redlands leucaena and the conventional Wondergraze variety.

Trial leader Craig Lemin reported that Redlands and Wondergraze with inter-row pastures – a mix of urochloa, Indian couch, black spear grass, wynn cassia and seca stylo – have recorded average daily gains of 0.65kg and 0.69kg respectively, over 321 days. The improved pasture paddock has been similar to the leucaena, with an average daily gain of 0.66kg over the same period.

However, when stocking rates are taken into consideration, the leucaena has outperformed the improve pasture paddock. Productivity of the leucaena over the period has been 0.45 kg/ha/day versus 0.25 kg/ha/day for the improved pasture.

These are annual productivities of 165 kg/ha and 90 kg/ha respectively.  Cattle will remain on the trial until early August when the 365-day grazing will be complete.

Peter Shotton, NT DITT trial lead at the Douglas Daly Research Farm, has been instrumental in more than 20 years of leucaena trials in the Northern Territory which have consistently shown improved weight gains from leucaena.

The leucaena paddocks achieved and average liveweight gain of 1kg per day per hectare over the 307 trial period to date.