THERE’s been a distinct shift in fortunes for some bull breeders, following the dramatic turnaround seen in the slaughter cattle market over the past three weeks.

That’s one of the key trends picked up by Beef Central in gathering information for a progress report on Eastern Australia’s spring bull selling season, now approaching its mid-point.

With a general drift from southern to northern cattle regions as the spring sales calendar unfolds, the other obvious impact this year has been seasonal fortunes. Bull breeders in southern NSW and Victoria have been supported by generally good to excellent seasonal conditions being enjoyed by their commercial clients, while for breeders further north, the poor season is still a big factor in sale prospects.

Southern states stud stock sales identity Andy McGeoch, a veteran of 50 years in the game, says he has seen clear evidence of a rise in bull sale fortunes since the commercial cattle market started to kick three weeks ago (click here to view a recent Beef Central article on meatworks cattle price trends).

“Anybody who’s half-awake would realise we are on the cusp of a pretty good cattle market, and that growth in confidence is helping underpin many of those sales that have been held since prices started to rise,” he said.

“It’s only really happened in the last couple of weeks. The sales that went off early have done it a bit harder, as a general rule,” Mr McGeoch said.

“Even in the space of a week, results have improved. Most of the early spring Angus sales averaged in the mid-$4000’s, and only the rare one went over $5000, but the more recent sales have averaged anywhere from $5300 to $9000. Mind you, they also represent some of the better catalogues, so it’s difficult to make direct comparisons.”

A month or so ago, any bull breeder would have been ‘very happy’ to take a $5000 average this year, but that’s changed a little since then, Mr McGeoch said.

A standout result illustrating the recent trend was last Thursday’s Millah Murrah Angus sale near Bathurst, where there was a total clearance of 95 bulls offered for an average price of $9147. It set a new Australian Angus sale average record, eclipsing Millah Murrah’s own 2011 effort of $8850 for 80 bulls. Top price was $70,000 for the MM Neutron son, MM Hercules, sold to Gilmandyke.

Millah Murrah principal Ross Thompson acknowledged that one of the factors, at least, behind the result was the growing confidence among commercial cattlemen over the recent price trend in the cattle market.

Elders’ Andy McGeoch said strong results recorded this spring were not restricted to Angus genetics, however. The earlier Dubbo Poll Hereford sale produced a solid $6200 average, due in part to a very loyal clientele.

Last week also delivered two exceptionally good NSW Shorthorn bull sales, in Futurity and Yamburgan. Both were held after the earlier rain events in the second and third weekends in August.

Manchee Agriculture’s Yamburgan sale near Narrabri on August 28 sold 70 out of 74 bulls for an average close to $6700, while Jason Catt’s Futurity sale near Baradine sold 40 of 41 averaging $6150.

See a selection of other recent outstanding spring sale results at base of page.

Mr McGeoch also noted the trend towards polled genetics, which he said had appeared to influence some sale outcomes this year.

“In those breeds where it is an issue, I think anybody who is serious in the stud game is starting to select for those homozygous polls, and it’s showing in results,” he said.

The August 29 Ironbark Hereford sale near Barraba (northern NSW, where seasonal conditions contrast with those further south) produced a satisfactory average of $5134, but delivered only a 60pc clearance at auction, with 76 bulls from the offering passed in.

As identified in this earlier Beef Central article, this year there has also been good grounds to trim catalogue numbers back a little, and get rid of any bulls that weren’t quite right. Vendors who have decided to defy that trend are perhaps now paying a price.

Mr McGeoch said the contrast in seasonal conditions between the northern part of NSW and into Queensland, and southern NSW and Victoria was also being reflected in sales results so far this spring.

“Most of the bull sales that have been particularly successful this spring have been among those fixtures further south, and in the NSW central west, where their bull-buying clients have enjoyed the best autumn/winter in living memory,” he said. “It’s been heavily seasonally-driven.”

With only a few bull sales left to complete in the NSW central western circuit, the focus will now start to shift further north, and into Queensland. Weebollabolla Shorthorn sale on Friday this week will provide another benchmark for the season-exposed northern NSW/southern Queensland region.

Mr McGeoch said seasonal variation and cattle market factors aside, this spring’s bull sale results also reflected the ability of the respective vendors to engage with their commercial bull clients.

“As agents, when there are 30 or 40 Angus sales on in quick succession, we can only service them to a certain extent, with the clients they have, and any free clients that might be about. About 90 percent of it (marketing) these days is about the stud breeder taking greater responsibility for marketing themselves. And those that have done it well – engaging with past and potential customers – are reaping the benefit,” he said.

As an example, he pointed to the early-August Clunie Range Angus sale near Inverell. Because of its northern location and exposure to poor seasonal conditions, and pre-market-rise calendar slot, it could have been expected to struggle. Instead, because of some very effective direct marketing to clients in the north, Clunie Range recorded a total clearance of 104 bulls, averaging $5875.

“Those blokes that don’t go out and do it, just don’t get the money,” Mr McGeoch said.

“Ross Thompson has been doing it well for 30 years at Millah Murrah, and as well as producing exceptionally good cattle, he gets out and markets them, very effectively,” he said.

“But even though things have been tough, there’s a lot of long-term optimism in the beef industry, and people are looking over the horizon,” he said.

“Commercial cattle producers are realising that if they are going to build their herds up and tap into that opportunity, this year represents a chance to upgrade their genetics, at competitive prices.”

“We’re seeing a distinction emerging in the marketplace between the high-performance cattle coming from well-recorded herds, backed with performance information and quality genetics, and the rest. The results for those better performers this spring has perhaps been much better than what we might have anticipated, only a few months ago,” Mr Parnell said.

There were plenty of predictions of a very tough bull selling season this year, but for many bull breeders, sales to this point had been above expectations, he said.

“The recent cattle market movement has certainly helped deliver that. It gives buyers confidence to invest, but for a while now we have seen record meat prices in customer countries like the US. It’s just taken time for the Australian supply industry to start to align with that, because of the long dry spell in the north.”

“But bull buyers are seeing past that now, which is very pleasing,” he said.

While there had been a large increase in the number of Angus bulls offered over the past five years, this year, some of the more discerning bull breeders and marketers realised that rather than flooding the market, they were better off being a little more selective, and winding back numbers a little.

“The further north you come, the more that trend has been seen. Clearance rates, particularly, have held up stronger this year than many Angus breeders expected.”

“There’s a lot more Angus bulls on the market now than there was five years ago, and breeders realise that if they want to maintain their position as a preferred supplier, they have to put forth good quality bulls,” Mr Parnell said.

“In the midst of such tough environmental and market conditions, we were overwhelmed with the support from new and old clients from all parts of eastern Australia,” principal, Prue Bondfield said.

“The total clearance rate may be attributed the fact that every time the bulls came into the yards before the sale, we took a critical look to see if they really needed to be included in the draft in a tougher selling market,” David Bondfield said.

“What we were left with was quality bulls with the exceptional performance data that we were very proud to offer and buyers commented on this quality and consistency,” he said.

“The change in cattle prices should have a positive effect on bull sales later in the season, particularly if there is follow-up rain in the next month,” Mr Bondfield said.

“However, it’s not a simple equation for beef producers. The reduction in breeder numbers in the north and continuing pressure on cash-flow is the initial hurdle to overcome before production can start to ramp up again.” 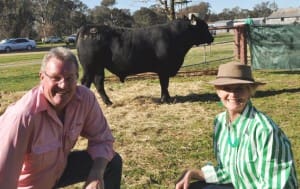 Top price of $17,000 was paid for Rennylea J138, purchased by Ann and Andrew Hicks’ Hicks Beef, from Holbrook to use in their composite breeding program. J138 is by GAR Ingenuity is out of the highest marbling cow in the Australian Angus database, Rennylea C490. J138 has top 1pc IMF and long fed index and a spread of growth that is suitable for heifers.

Te Mania’s northern sale held at Walgett in mid-August was heavily-exposed to the dry conditions across the region, but managed to sell 70 of 85 bulls offered for an average of $5285.