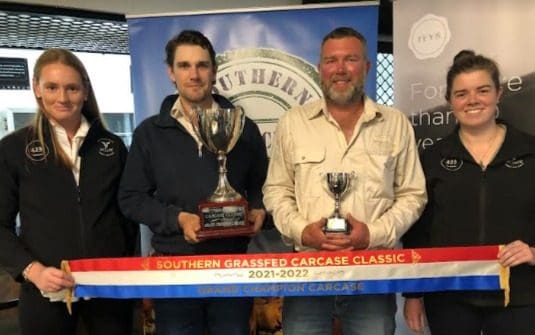 A FIRST-TIME entrant with a poultry-inspired focus on feed efficiency took out the grand championship award at the annual Southern Grassfed Carcase Classic on the weekend.

At the Lucindale presentation night on Saturday, first-time entrant Granite Ridge Angus at Reedy Creek, South Australia, took out the top award with their 313kg Class 2-winning steer carcase with a score of 94.44 points out of 100.

The carcase scored 14/15 for meeting market specifications, a full 35 points for saleable meat yield and 45.44/45 points for eating quality.

Granite Ridge Angus owner Scott Finlay said he had worked most of his working life up until three years ago in the poultry industry. He worked for 11 years as a broiler complex manager at Murray Bridge, while also operating a Spring calving commercial beef herd.

“It (poultry) is a similar game that is chalk and cheese to the one we are in, but at the same time it is all about carcase quality.

“That’s something that in poultry we are actually hammered with and it’s something we’ve taken to what we are doing now … so it looked like it paid off.”

Scott told Beef Central the benefit of his focus on achieving good feed conversion came through in the AI mating of “leading edge” sires to Granite Ridge dams based on estimated breeding values and this was combined with manager Jamie Kunze’s knowledge of cattle assessment and management.

“And the more feed we can put down their throats the better … irrigation certainly does help because we can then produce feed where others can’t.

“If has got enough feed in front of him, he keeps consuming, he keeps growing,” Scott said.

Hybrid vigour and ‘keep the feed in front of them’

The reserve grand champion carcase was C.I and M.K. Bateman’s Class 3 winner, the top single steer or heifer 0-4 teeth 340.1-420kg. The carcase scored 93.68 points, including 12/15 for market specifications, a full 35 points for saleable meat yield and 46.68/50 for eating quality. The South Australian producers from Furner entered a consignment of 22.

The Batemans are two-time winner of the grand champion carcase award and self-declared ‘apprentice’ Darcy Bateman said the winning Class 3 and reserve champion carcase was ‘picked’ by his father Chris. It was the progeny of a Black Simmental bull. The family runs a mixed breed enterprise with Simmentals, Angus and Herefords.

“We try to get a bit of hybrid vigour through our bloodlines,” Darcy said.

Chris Bateman said it was good to come back to win the reserve grand champion carcase, but he said the winners of the team classes deserved congratulations for the consistency of their breeding and feeding. He said the reserve carcase stood out for its eye muscle area (107), high IMF (650) and low ossification (140). He said keeping energy in the feed played a big part in achieving a low ossification score and avoiding dark cutters, plus “keeping them going through the Autumn” to avoid setbacks. Improved pastures that go late into the Spring were also important.

“I’ve found myself that turning your cattle off early hasn’t worked that well and I’ve got increased dark cutters, because your protein level is high and your energy level is low.” 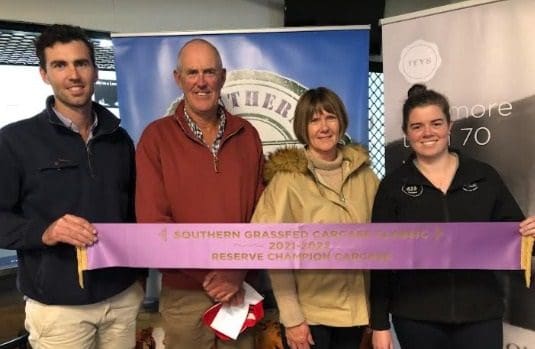 Competition is largest in Australia

This year’s competition hosted by Teys Australia attracted 1516 entries and at the Lucindale awards night SGCC chairman Ben Glatz also presented a $50,000 cheque to the Royal Flying Doctor Service, bringing the competition’s total donations to the service to about $350,000.

“It’s the largest event of its kind in the country and we will keep it that way,” Mr Glatz said.

Yarli Pastoral owner Rhys Fischer said he ran between 700-900 Angus breeders at Meningie after taking over from his parents in 2013.

“I trade most of my cows, buy in what I need as I need (them) and buy commercial bulls (from Adam Merry).”

Rhys said he “put everything into a pretty tight spreadsheet” after buying his parents out and changed tack away from spending money on buying stud sires to focussing instead on investing more in pastures.

He said he had gone down that path for the last few years and he was proud of his competition results.

“Because it has sort of proven to me that I’ve been doing the right thing, all probably based more around buying good quality aged cows and spending a hell of a lot more on pasture and management.”

Rhys said he had bought a property when prices crashed in 2016 and decided to add value to the cattle he had, rather than run more cows or buy more bulls, by sticking to “a unit” of around 700 breeders and “try to get maximum weight out of everything.”

He said his data showed that Autumn calves weren’t worth carrying, so they were sold as vealers to mainly Woolworths in December-January at about 11 months of age. He said calves from his June-July and September-October calving cows were also weaned at 11 months.

The calves are run through Winter on lucerne oversown early with barley, with the first June/July calves being sold from September to November at 280-320kgs, and the last draft leaving in January.

With his triple calving system, he has the ability to lock up dry cows at any time during the year, to allow a feed wedge to grow.

“Half the herd calves in February-March, then I calve again in June-July and again in September-October.

“At the moment I’ve got 200 cows locked up on hay and silage, because we haven’t really had an opening rain,” he said.

“If you’ve got the feed in front of you, you can make decisions, but if you’re at the bare bones and have to sell cattle, that’s when you take a hair cut.”

Rhys Fischer told Beef Central after going to bull sales and seeing his $4000/bull budget blown away by rising prices, he decided he would rather spend less on bulls and more on fertiliser. This year he bought eight yearling Angus bulls for an average of $2500.

“In a beef operation that generally doesn’t make a hell of a lot of return on investment, spending that on their operation …. I would rather spend $50,000 on bulls and spend another $70,000 on fertiliser.”

He said his management plan suited his soft sand fattening country with its mild climate.

“We can’t run it hard, we can’t stack them on three deep.

“I think you’ve got to work the season and work your pasture in favour of you getting the maximum amount of weight onto each calf to get it out.

“We are lucerne-based and grow more feed in Spring and Summer than we do in Winter, so we lock up those cows in Winter before they calves and let the weaners out on pasture to let them grow on forward feed and the cows only need maintenance.” 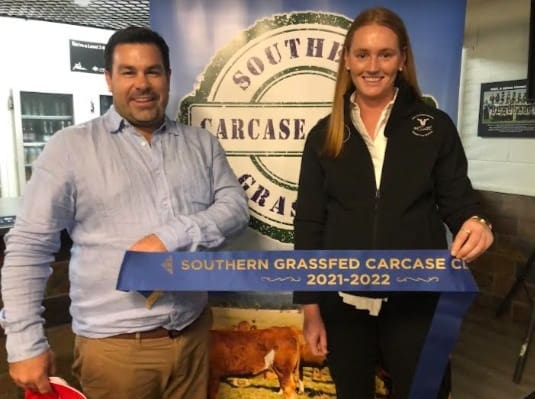 SGCC treasurer Jake Phillips said Yarli Pastoral’s Class 4 winner “is certainly is one of the better carcases in the entire country for eating quality. So they should be very proud,” he said.

The winner of the Class 1 — a single steer or heifer, 0-2 teeth 180-260kgs — was the Millicent district operation of K. & J. Chant and Sons with a 249kg steer carcase that score 14/15 for market specifications, 33.87/35 for market specifications and 40.61/50 for eating quality. Lucy Chant said the winner came from a consignment of about 40 Angus, Hereford and Black baldie steers. Second place went to H.G Thompson and Sons, Yorketown, and third to R.M. Wilson and Son, Brentwood. The Chant family also won Class 7 – most improved exhibitor (team of 10).

Lake Hawdon Proprietors at Robe took out the second and third places in Class 3 with carcases scoring 92.95 points and 92.81 points.

Evan Flint said he had stuck to Shorthorns when everyone else had “gone to the most popular breed around.”

“I think the good old Shorthorns are up there with the best of them.”