THE gulf of difference in cattle supply drivers at present between northern and southern Australia is in clear evidence in slaughter cattle pricing this week, where southern grids and saleyards are 35-40c/kg dressed weight higher than northern areas in places.

Both regions continue to kill cattle in near record numbers, but for entirely different reasons. With Queensland now 80 percent drought declared and large parts of northern NSW in the same boat, there is still an abundance of cattle in those regions heading to slaughter. That’s served to keep a lid on pricing for the timebeing, albeit at levels far above this time last year.

In the southern states, kills also remain abnormally high for this time of year, and close to record numbers in several states. But that’s being driven by just one thing: price.

Both saleyards and grid prices in the south have continued to climb in the past fortnight. As is often the case on a rising market, saleyards pulled ahead of direct consignment in pricing for a while, but equilibrium now appears to have returned.

In specialised segments, Teys Australia’s PCAS pastured assured cattle are currently worth 570c/kg dressed weight in the company’s southern plants this week, and 535c/kg in its Queensland plants.

In contrast, up in Queensland, grids have been remarkably stable for the past month or so, as the heavy flow of slaughter cattle continues. Here’s some current competitive OTH quotes for SEQ: 450c/kg for milk and two tooth heavy grassfed steer, 485c the MSA steer and best cows 415c.

Saleyards prices in Queensland are now well behind those southeast Qld direct consignment rates, with plenty of saleyards cows selling for 350-360c/kg in the past few days in northern sales.

In the south, conditions are by-and-large now wet and cold, and cattle should be in short supply – but kill numbers (see slaughter report below) are being sustained by some truly remarkable pricing. Reference this week’s Wagga sale report penned for Beef Central by Leanne Dax.

While the cow price spread north and south (around 15c) is not as great as it is for male cattle, current price spreads of 35-40c for steer lines suggest it is only a matter of time before southern buyers start pushing north in numbers to secure good slaughter cattle. Northern cattle would be looking ‘attractive’ to some southern processors at present, even with a $70-$85 added freight bill.

But as soon as it rains, or cattle supply exhausts itself in northern regions, circumstances will again change. It’s not hard to imagine northern grid pricing somewhere near the rates currently being enjoyed in southern NSW, Victoria and SA.

Readers might say it’s not uncommon to see a 35c split in regional pricing around this time of year, but it’s the basis that’s the important point: it’s never been anywhere near this high.

The big price bonanza in southern states has sparked some huge yardings in Victoria and NSW this week, but the question is, how long can that last?

The current high rates of kill, Australia-wide – driven by drought in the north and extraordinarily high prices in the south, now looks like greatly delaying any recovery in national beef herd size, once it rains.

“There is going to be lots of producers across the Eastern states who sacrifice cattle that they would otherwise hold back for herd re-building, purely because of the money that’s on offer,” a key market contact told Beef Central this week.

“It happened in the US when their herd collapsed due to drought, and the same thing is going to happen here. Producers will have heifers in the paddock worth $1500 or $1600 at the meatworks, and they will let them go,” he said.

“Prices will be that high, people will be tempted to take the money and run. But you can’t blame them.”

Perhaps the one consideration that’s likely to moderate that trend is that there is absolutely no sign that current cattle pricing is going to fall away again, any time soon.

The counterpoint to all the talk about cattle price bonanza is that the international meat market is starting to look wobbly.

Contributing to that are record high kills out of New Zealand, adding to competitive pressure for grinding meat into the US and elsewhere. 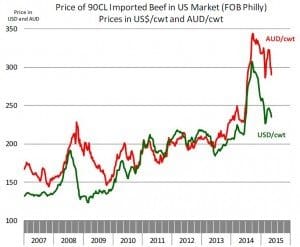 “The export meat market has certainly gone off the boil. Big kills in Australia haven’t helped, but the meat market is certainly not reflecting the high prices now being seen for cattle,” a trusted export trade contact said.

“Meat has gotten expensive in many markets, and demand has just softened. Additionally, markets like Japan and Korea are still digesting some of that huge volume of meat that’s been stuck on the wharves in Hong Kong, after China’s earlier clampdown on the grey trade. It hasn’t worked it’s way through the system yet.”

Imported 90CL grinding meat prices into the US have continued to deteriorate in A$ terms, as NZ ramps up its seasonal kill to levels far above earlier expectations, and the US$ continues to strengthen. When converted into A$, imported 90CL prices in the US are now down 14pc from the peak of the market.

The week ended May 9 saw NZ’s kill 13pc higher than this time last year, and the second largest weekly slaughter week in at least 20 years – barring the drought-induced March 2013 period.

US end-users are well aware of the seasonality in imported beef prices for May and June. They also have abundant inventories secured earlier in the year as a hedge against the sharp appreciation in the value of domestic US beef. As a result, bidding on imported beef has been subdued in recent weeks.

Drought, high beef prices in world markets and more recently a weak A$ have all encouraged Australian beef processors to run as hard as they can and bring more beef to market.

Last week’s NLRS weekly kill report shows a five-state tally of 176,926 head, back only half-a-percent on the week before, and still near record highs recorded three weeks earlier.