BOTH meatworks grids and saleyards have continued their rapid price descent this week, maintaining the sudden correction in cattle pricing that set-in a week earlier.

As highlighted in this item published on Beef Central yesterday, there’s a powerful collection of factors conspiring to drive cattle prices lower at present, including: 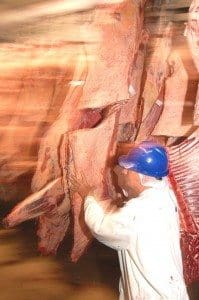 After a sudden, and somewhat unexpected 20c/kg decline in many Eastern states processor direct consignment grids the previous week, that new trend has intensified over the past seven days.

Indeed, some processor grids in southeast Queensland have been adjusted downwards three times since last Monday – such is the state of flux in the market, making it difficult to capture the broader price sentiment that’s unfolding.

Some SEQ processor grids have declined another 20-25c/kg on this time last week, while others have dropped as much as 40-45c over the same period.

We’ve seen grids today from competitive SEQ processors with best cows at 500c-505c/kg, down from a recent record high of 545c just two weeks ago. Heavy grassfed four-tooth steers which a fortnight ago were fetching 555-565c are today making around 525-530c.

The widening gap between the ox and the cow price that’s occurring at present is clearly reflective of what the US manufacturing beef market is doing in recent times.

Again, the fact that grids are such a moving feast at present makes it difficult to pin-down accurate reflections of the market.

This week’s grid result – back 45c/kg in one clear example – is arguably the biggest single week fall seen in direct consignment offers in the past decade.

But it needs to be said, it follows a rise of identical proportions across a single week only five or six weeks ago. Despite the alarming size of the recent falls, it’s always worth putting such figures into some context. This time last year, best cows were making 355-370c and four-tooth steer 380-395c. On today’s grid prices, that’s at least 130c higher for cows, and 135c on steers, year-on-year.

Many southern Australian processor grids have also fallen 20-30c again this past week, and higher in places.

Despite the overall decline in numbers, some processors in both Queensland and southern states are taking the unusual position this week of offering kill slots for next week and the week after, without a price attached – fearful that any cattle booked now at a price might look pretty expensive by the time they reach the knock-box. A week is a long time in the current state of the slaughter cattle market, it seems.

It appears some processors are caught in a tight spot: cattle – against all odds – are again starting to flow, as hot and dry spring conditions deteriorate and producers seek to lighten off. But at the same time, processor profitability has dried up just as quickly, plunging many descriptions well into the red, making it difficult to again schedule larger kills.

Where there was evidence of large export plants in most state skipping weekday shifts only a week or two ago, because of shortage of supply and ever-higher cattle prices, that now looks less likely for the next few weeks, as dry cattle start to flow.

But that’s not going to last long, processors spoken to yesterday conceded.

Saleyards have followed a similar trend this past week, but as always happens on a falling market, have been impacted even more severely than the direct consignment channel. Grids are currently well in front of saleyards on many slaughter cattle descriptions, it appears.

The Eastern Young Cattle Indicator closed yesterday at 557.75c, now down more than 37c from the recent high-point seen on September 29.

Individual physical sales recorded by NLRS displayed another round of big price falls, with Ballarat’s EYCI-eligible stock falling 54.7c on the previous sale and Packenham down 46.3c, week-on-week.

Yearling steers to processors slipped another 30c/kg liveweight, with medium weights selling from 266-309c and heavyweights from 270-296c/kg. Heavy steers and bullocks also showed a significant decrease, selling from 266-296c/kg. Grown heifers sold from 220-277c/kg. Cows were the most affected sliding 45c/kg.

Wagga sale report was not issued by the time this report was compiled (Beef Central is travelling to Biloela this morning for a producer gathering), but by all accounts, was again well back on the previous sale.

At Toowoomba’s twin sales held yesterday, many descriptions were back 20-40c/kg, and in places more, in a combined yarding of 2300 head.

Eastern States kill back another 3pc

But truth be known, the weekly tally of 139, 888 head would probably have been little higher, even if it had been a full working week – such has been the state of cattle supply up till this week.

Both Queensland and NSW recorded significant kill declines, back 7pc and 13pc to 69,070 head and 31,270 respectively, while in Victoria, which killed a full week, numbers lifted to 27,097 head.

South Australia also declined 8pc to 8130 head while Tasmania benefited from a return to work at JBS Longford after its normal seasonal break, with numbers lifting 64pc to 4322 head.