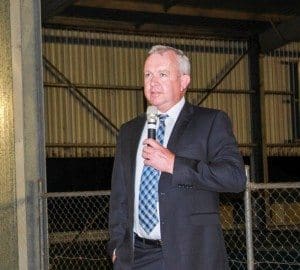 Improved access to rail and air-freight holds the key to driving a major expansion and increased competitive presence in the cattle market for Australia’s third largest abattoir.

NH Foods Australia Pty Ltd is planning a significant investment over the next four years to increase the efficiency of its flagship Oakey abattoir and to upgrade the plant.

A railway which connects the large cattle herds of western Queensland to the port of Brisbane runs right past the abattoir’s front door, and a brand new export airport has just opened only 16km away at nearby Wellcamp.

The company is pushing to be able to receive cattle at Oakey by rail to improve the efficiency of sourcing from the west and to enable it to deliver beef containers by rail to the Brisbane port, while the new airport is also expected to give the plant direct air-freight access to export customers in Asia and the Middle East.

Existing Queensland Government rules do not permit the Oakey abattoir to receive cattle by train, even though the rail line runs straight past it, because there is no rail siding in place.

Mr Gleeson said there were several reasons why putting western cattle on trains was a “no-brainer” for the state.

Western Queensland has had very limited access to rail wagons for cattle for several years, which has seen a large number of cattle from the region subsequently drawn south towards abattoirs in southern Australia.

Mr Gleeson said a weekly cattle train, which allowed producers to load small consignments of cattle at Quilpie, Charleville, Morven and Roma, would reduce freight costs and attract those stock back toward the abattoirs in South Eastern Queensland.

“We believe if we can have cheaper costs for freight (by rail) we would get a lot of those cattle coming back, not just to us, but coming back into Queensland, and I would much rather see that,” Mr Gleeson said.

“There are a few good reasons why we should have this train operational – it is a win-win for everyone.

“If we can offer consistent services running once a week we will get the cattle on that train, and it will also reduce trucks on the road.”

The Oakey abattoir currently delivers about 100 containers of beef each week to the Port of Brisbane, all of which are trucked down the Toowoomba range.

That number will increase when the abattoir expands. Mr Gleeson said a large portion of that volume could be moved off the road if rail access is achieved.

Rail would also allow the plant to deliver fully packed containers to port. At present many containers leave only partially packed under road weight-limit restrictions.

Gaining access to rail is also integral to the plant’s planned expansion, which will also increase employee numbers from the current 730.

“It is a bit of a no-brainer for logistics,” Mr Gleeson said. “We have got cattle coming in, containers going out, we are there every week, so that is the message we are giving to Government.”

The United Arab Emirates is currently the largest destination for air-freighted product from Oakey, but air-freight into China is also seen as large potential growth area.

“These are the sort of things we want to look at,” he told an audience of about 100 people at the Darling Downs Beef Xpo.

“Currently we are just boxed commodity beef going out – whole primals and sub-primals.

“I believe we have to move toward shelf-ready, portion control product to stay in the game, and I see there is a great opportunity to do that through Wellcamp, so that is something we are pursuing aggressively right now.”

“With air freight you have two markets. You have people which are used to your chilled aged products, such as Europe and the USA. They love the time on the boat going over to the USA to age.

“In other countries such as Vietnam, China, Saudi Arabia, and the Middle East, they are used to the wet markets where it is killed and hung up and sold fresh.

“So I believe there is an opportunity for us to really promote air freight, and to say it was slaughtered three days ago, it is now on your shelf, and that is the approach we will be taking with them.”

Mr Gleeson said that until recently the Oakey abattoir operated under an archaic industrial relations agreement that restricted shifts to 7.6 hours a day, five days a week, with significant penalties in place for operations outside of this.

The agreement effectively meant the company could only operate a plant worth hundreds of millions of dollars for just 38 hours each week.

An agreement was reached last year that allows the plant to work on a 9.5 hour per day shift in the boning room and provides the flexibility to move to a seven day a week operation.

“It will allow the plant capacity to increase to 1650 a day seven days a week,” Mr Gleeson said.

Mr Gleeson said that while people talk all the time about Australia’s clean and green image, he believes that Australia could improve on marketing its Food Safety Standards.

“One thing I don’t think we sell well enough is our skill sets of what we have in Australia,” Mr Gleeson said.

“The biggest thing I’ve noticed is that our food safety is backed up by the shelf life of our product – for example, the Americans sell their products for a 60-70 day shelf life, we sell ours for 140 days.

“These are the things that set us apart and I don’t believe we sell this well enough as an industry. “

He noted that the average length of employment for an A-Grade slaughterman in Australia was 25 years.

“That is what sets us apart. I don’t think we sell that well enough.”