The Kimberley Meat Co plant between Derby and Broome in WA

WHILE far northern Australia’s highest-profile beef processing business near Darwin has fallen on hard times, a second new abattoir venture across the Western Australian border is going from strength to strength.

Jack Burton and partners’ Yeeda Pastoral Co, between Derby and Broome in WA’s remote northwest, completed its abattoir project in late 2016, before finishing export license approvals and going into full production towards the end of last year.

This year the plant is processing between 1100 and 1200 head of cattle each week, on a five-day, single shift roster. And most importantly, the project’s backers say it’s making a profit.

“We’re pretty happy with where things are at. There’s certainly a margin in it,” Jack Burton told Beef Central during a wide-ranging interview yesterday.

“It’s all about how much it costs to put an animal through the plant.” 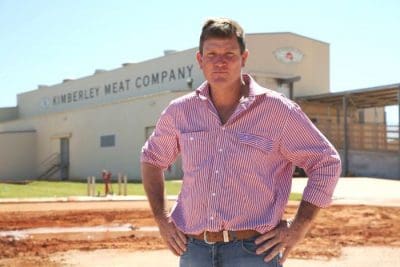 Principal Jack Burton in front of the Kimberley Meat Co plant. Click on image for a larger view

The region’s last ‘original’ beef abattoir at Broome closed its doors in 1993, the year that Mr Burton and his wife Vicki bought nearby Kilto station, before expanding (with the injection of partners) via the purchase of Yeeda in 2000.

The son of a butcher, he had been toying with the concept of a meat processing venture on Yeeda for some years, but it was the disastrous 2011 live export market closure that provided the final catalyst to ‘have a go’, and provide a market alternative should ever a similar situation occur again.

While reluctant to make direct comparisons between Yeeda’s own operations and AA Co’s Livingstone investment 1000km to the northwest, Mr Burton said what had made Yeeda successful was its simplicity, lack of unnecessary overheads, and it remained a ‘family show.’

“We act and operate like a family business,” he said. “We like to think we are pretty nimble, and can make decisions quickly, and we have a very small ‘top-end’.”

“Ultimately, the profit in beef processing comes from what you buy the raw material for; what you sell the finished product for; and how much it costs you to convert it.

“The market ‘is what it is’ for our product (generic lean trim grinding meat for hamburgers). You’ve got to buy it for what the next person is prepared to pay. Therefore the only thing you have left to play with is getting it in the box as cheaply as possible, while not compromising the important things like quality and food safety.”

Mr Burton said the Yeeda business was ‘pretty comfortable’ killing its current 200 to 250 head a day, depending on what type of cattle were on hand, but obviously given recent events, the business was now keen to ‘push that a bit harder.’

He said he had fielded a number of calls from Kimberley/VRD cattle producers following AA Co’s announcement on Wednesday that it plans to close its Darwin abattoir.

Unlike the +$100 million spend at the Livingstone site near Darwin, the Yeeda facility, pictured above, was constructed on the ‘smell of an oily rag’, with much of the basic concrete and steelwork construction carried out by Mr Burton and his team themselves.

Specialists came in for refrigeration and other technical work, and experienced advisors helped with the design and layout. Visitors to the plant from the east coast (a team from Sanger Australia was at the site earlier today) often express surprise at how well-designed and constructed the facility is, despite its remote station location.

A small, multi-skilled team led by Mr Burton does all the cattle procurement, manages and operates the plant, and markets much of the chilled and frozen output. The business has the flattest of flat management profiles.

The offtake arrangements could hardly be more simple or efficient, with the vast majority of each boned carcase simply going into a frozen commodity grinding beef pack. The exception is a few cuts harvested for table use.

Risk management is equally straightforward. “Unless we have forward sold all the product, we don’t pull the trigger,” Mr Burton said.

“We work on the philosophy that the best preservative is the pulse. We’re in the situation where unless we have already sold every bit of the animal, we do not put it through the system.”

He said historically, the business had looked at live export as complementary to its own processing operations, which relies mostly on older cull cows and bulls not suited to the boat trade. In fact Yeeda Pastoral Co itself continues to live export 10,000 to 12,000 cattle each year out of its own operations.

“We’re very much either/or, depending on where the money is. But we think we’re approaching a time where if live export prices keep coming back, they will get to a level where the abattoir can also compete, head-on, with the live export trade on the better quality, younger cattle,” Mr Burton said.

“With the continuing decline in live export prices recently, we’re doing the sums very closely. And we think we are getting bloody close”

“This plant has to be able to survive on killing culls and rough cattle that are unsuitable for live export,” he said. “But the day we can pay 1c/kg more for the better cattle than what live export is paying, we’re in a whole new world. Suddenly our access to 50,000 or 60,000 culls each year turns onto 200,000 or 300,000 cattle.”

“With the continuing decline in live export prices recently, we’re doing the sums very closely. And we think we are getting bloody close.”

Mr Burton said the offals and the ‘fifth quarter’ from each animal was now also very important in the overall profit mix, especially as Indian buffalo meat exports to Indonesia did not include any offal shipments. 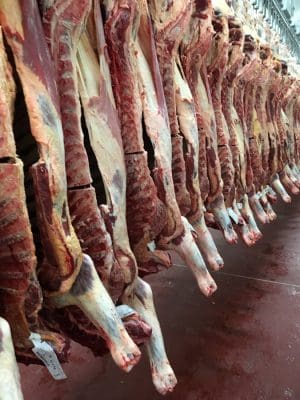 Carcases on the rail in the Kimberley Meat Co’s chillers

In addition to its ‘bread and butter’ kill of cull cows, cull herd bulls and scrub cattle, the Yeeda plant also processes a smaller number of young heifers, which go into a domestic market in WA’s southwest corner. And within the next couple of weeks, the plant will also start its first certified organic beef kill, using Yeeda-bred cattle which are run under a Certified Organic program.

This past summer’s wet season, which dumped 2.4 metres (2400mm) of rain on the property, destroyed roads and delayed the start of the plant’s first organic kill by some months.

In addition to Yeeda’s company-bred cattle, the plant is processing stock for Gina Rinehart’s Hancock Prospecting and others bought liveweight basis from local cattle producers. Cattle slaughtered over the past 12 months have come from as far east as Katherine, and west to Newman, in WA’s Pilbara region. The market for ex breeding cows +400kg liveweight in the region is currently around 170c to 185c/kg.

Around one third of the plant’s output is sold as quarter-beef – either frozen for export, or chilled for the domestic trade – with the balance going through the plant’s own boning room, as frozen boxed beef.

Sydney meat trader Stuart Hanna, from Sanger Australia, has traded significant quantities of the Yeeda product into the US grinding beef market over the past year or so, telling Beef Central this morning it had performed well, and was well-received by customers.

Mr Burton said the plant now had a good spread of markets, trading into South Korea, Indonesia and other southeast Asian destinations, as well as the US and domestic trade.

One of the plant’s distinct advantages is large discounts available on refrigerated freight rates back to Perth, as most trucks headed north full, but have little or no opportunity for back-freight.

As a result, most of Yeeda’s frozen export carton and quarter beef exits the country via Fremantle, whereas Darwin tends to be greatly limited by shipping schedules.

“It’s one of those tough businesses where if you save a dollar a head somewhere, that adds up to $60,000 or $70,000 a year, over a full season’s kill. And there’s probably a hundred ‘$1 a head scenarios’ that make the difference between how we choose to operate, and how somebody else might operate,” he said.

“On the worst animal we kill each week, we still make a quid on, but on our best cattle, we’re making a good net return,” he said.

But it’s not just about killing whatever turns up. The Yeeda grazing business is changing as a result of the growth in the processing business, also. A million acres of country has been set aside on Yeeda just for backgrounding and depot purposes, within 30km of the plant.

Mr Burton said last year, Yeeda had bailed-out of some lines of local cattle it was competing with AA Co over, because at the price, it would have been ‘totally unprofitable’ to process.

“AA Co pipped us on price, and they still had a $100/head freight bill on them to get back to Darwin. But good luck to the producers who got it – it was just beyond what we were prepared to pay in order to stay in profit,” he said.

While 60pc percent of the country on Yeeda is still used for breeding, increasingly, more country is being used for backgrounding light cattle bought earlier at more attractive prices.

“The profitability is more across the total supply chain, such as getting cheaper light cattle to a good killable weight, rather than just the margin from slaughter itself,” Mr Burton said. Faced with a traditional northern wet season each year, Mr Burton has plans to push the plant’s annual operating season out to ten months.

“We’re pretty comfortable with how the plant is operating now, and we think on a one-shift basis, we can lift weekly throughput up to 1500 a week for the bulk of the season.

“Our end game at this current stage of development is an annual kill of between 50,000 and 60,000 head, before we have to spend any more money on the plant to deliver more volume.”

The plant currently only utilises blast freezing, but plate freezing technology is part of future expansion plans. That next stage will also include the installation of a hot boning rail, for greater flexibility.

So has labour been a significant issue, given the plant’s extremely remote location?

“When we first got going, it was a challenge. We’re 100km from town, in the middle of nowhere; we weren’t well known. But all of a sudden, word has gotten out that it’s a viable plant; it’s making a quid; and it means there will be a job available again for staff next year.”

“As a result we’re getting a good labour force around us, while also still reliant on 457 visa holders from overseas. In some ways, the isolation has been a problem, but it has also simplified our labour resourcing, because everybody lives in a community not far from the site.” 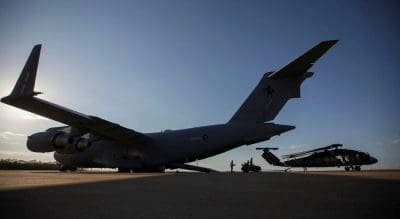 RAAF Globemaster cargo aircraft unloads helicopters for military exercises at Curtin air base, just down the road from Yeeda

The processing side of the Yeeda business currently has 64 staff on its books, including a team of indigenous boys who run the hide shed.

At some time in the future, Mr Burton has a vision to air freight fresh chilled carcase beef straight into southeast Asia. The plant is an hour and 40 minutes from Jakarta by air, and the Australian Government’s huge Curtin defence airbase, capable of handling virtually any aircraft, is located just 70km from the plant.

“If it happened, we could kill an irrigated pasture-finished steer or heifer today, and have it sitting in a wet market in Jakarta by midnight tonight,” he said.