COLORADO State University from the United States claimed top honours at the Intercollegiate Meat Judging competition, for the first time in the program’s 29-year-history.

Overall the week-long competition which kicked off on Tuesday July 3, and finished up with an awards dinner on Saturday July 8, attracted 130 students and 35 coaches from across Australia, Japan, Bogor, the United States and South Korea.

Runners-up to Colorado State University team was the University of Sydney, which trailed the winners by just 85 points.

Colorado State put in a standout effort to take out the Roy McDonald Shield for champion overall team, with one of the team-members, Brett Meisinger, also claiming the Founders Buckle for champion individual assessor.

Overall runner-up and multiple award-winning University of Sydney student Jack Cook placed just 17 points behind the winner, making this one of the closest contests to date. 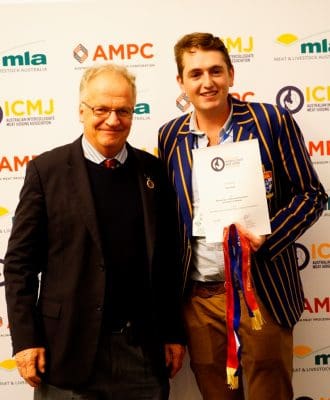 ICMJ president Dr Peter McGilchrist said the US team’s achievement was testament to their dedication to learning about Australian red meat production. He was also pleased with how close the competition was, with many of the placings requiring a “count back” to determine winners.

“Our program has absolutely achieved its goal of inspiring and developing future leaders of the global red meat industry,” he said.

“This year was a great contingent of students who posed the most thought-provoking questions we’ve ever had to our presenters, interacted heavily with companies at the careers expo and took full advantage of every opportunity.”

“The students and their coaches are clearly committed to a career in the global meat industry.”

Dr McGilchrist said the success of the ICMJ program would not occur without the continued support of its major sponsors, including MLA, AMPC, APL, Teys Australia, NH Foods, JBS/Andrews Meats, AACo, Rivalea, GradLink and Coles.

The top 10 finalists and the Coach’s Pick teams will go on to participate in an industry training week with Meat & Livestock Australia staff in Brisbane in August.

Student feedback from the week was that it “opened their eyes” to the possibilities within the Australian red meat industry.

“We learned so much more than we could have imagined,” the group of Sydney University students said.

“The networking not only among industry professionals but also peers was really beneficial.