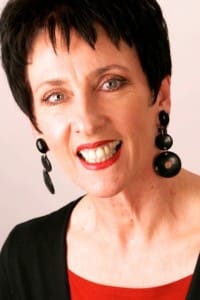 As a child, Robyn Moore spent most of her time tagging along with her dad – a stockman, drover, shearer and wool baler from Tasmania – on properties in places as remote as Torrens Creek.

Isolated and young, Robyn’s ‘friends’ became the mysterious voices reverberating from her dad’s old wireless radio.
Experiencing the world through her ears, meant Robyn swiftly developed a penchant for communication and affiliation with the power of words.
Robyn’s career began as a primary school teacher, before her youthful love of radio took hold.
Her 40 plus years as a voice-over artist have landed her behind the microphone in roles such as ‘Blinky Bill’ and the political satire, ‘How Green Was My Cactus.’
Now one of the most sought after motivational speakers in the country, Robyn is preparing for her next gig at the AgForce 360 Series South West Regional Dinner in Charleville, on 1 October.
At a time when agriculture is evolving, Robyn said the most important characteristic people need to adopt is Optimism.
“I grew up with my Nan Doran, who was one of Tassie’s last Pioneer Women, and she had Optimism by the bucket-load,” Robyn said.
“Things were always going to get better, it would always rain one day and she never bothered about the past. She loved her life on the land.”
Another topic Robyn will be discussing in Charleville will centre on how to achieve a more effective work-life balance, something producers are notoriously bad at juggling.
“One farmer in my audience said he missed his children because he was busy and angry,” Robyn said.
“He started to involve his children in all the things that kept him busy and his wife told me he was unrecognisable, contented and a different Dad.”
After addressing drought stricken farmers in Quilpie recently, Robyn said she couldn’t wait to share an entertaining, thought provoking and inspiring evening with the Charleville 360 Series guests.
“I have had the privilege to speak to thousands of farmers in drought affected communities over the last 18 years, and every time there has been feedback about profound shifts in perception for people,” Robyn said.
“On the night, we will laugh lots, be moved, think and be invited into being the best of ourselves in the face of the drought.”
The AgForce South West Regional Dinner will be held and the Corones Hotel, 33 Wills St, Charleville on 1 October, and will precede the AgForce 360 Series Forum at the Charleville racecourse on 2 October.
The Charleville AgForce 360 Series Forum will focus on the changing face of agriculture, touching on production advances, unprecedented consumer scrutiny and how burgeoning opportunities to supply high quality product to Asia is driving the dawn of a new era in our industry.