Mr Matthews, whose cattle industry career spanned 67 years, worked for Landmark and its predecessor businesses since 1989, where he had a roving brief across Australia’s pastoral regions in his role as national key account manager. 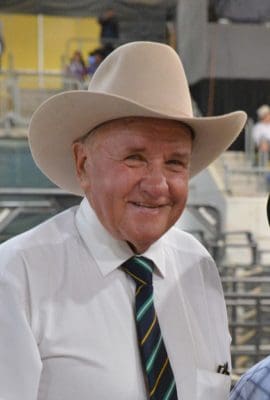 In this role he would make regular appearances across the length and breadth of the continent, becoming, arguably, the best known stock and station agent in the nation, at a national level. He could pop-up anywhere from southern Victoria to Cloncurry or Katherine, and was instantly recognisable and among friends wherever he made his presence felt.

Mr Matthews broke his teeth in the agency profession with the old Fiskin Read & Co agency, operating out of Newmarket Saleyards near Melbourne. He started at the age of 13, in 1949, and gained his auctioneer’s ticket by the age of 17, buying the Fisken Read business ten years later.

He partnered with Jack Coghlan and the two built the company into what was the largest private stock and station agency in the southern hemisphere, selling 210,000 cattle a year at its peak.

In a historical bookend, his great grandfather bought the very first beast to pass through the Newmarket yards, while Jimmy sold the last beast through the yards, before they closed in 1987.

Jim himself is immortalised in a mural on a walkway that passes underneath Epsom Road, on what was a key stock route into and out of the Newmarket saleyards.

After selling his agency business to Challenge Mercantile, he joined Dalgety around 1989.

As national key account manager for Landmark, which absorbed Dalgety, Mr Matthews had a ‘roving charter,’ dealing with most, if not all of the nation’s largest corporate-scale cattle enterprises, and gaining a reputation as a shrewd, tough, but fair advocate and negotiator for his clients – both buyers and vendors.

Over the years he did countless large cattle deals for the likes of Consolidated Pastoral Co, Stanbroke, AA Co, NAPCo, Kidman, Heytesbury, Western Grazing and others, as well as the north’s largest family-owned cattle enterprises.

In later years, he tended to specialise in the larger-scale pastoral regions of central, western and north Queensland, the Northern Territory, Kimberley and central Australia.

Mr Matthews had a struggle with throat cancer about 20 years ago, treatment for which involved the loss of his vocal chords. It’s hard to imagine a more serious obstacle to professional life as a stock agent, but in typical fashion, he adapted, using an artificial voicebox device to communicate. Many readers would be familiar with the scratchy, almost comical tone of the device he used, as he did business with clients, or had a beer at the bar, inevitably surrounded by mates.

Landmark’s general manager for meat and livestock, Mark Barton, worked with Mr Matthews more or less permanently for the past 20 years.

“It was his ability to deal with such a challenge as the loss of his voice, that really demonstrated his depth of character and determination – and people across the industry respected him enormously for it,” Mr Barton said.

“Jimmy was a colourful character, debonair, and always meticulously presented – popular and respected both by his peers and his competitors.”

“But I rate the greatest thing about Jimmy as being his ability to adapt,” Mr Barton said.

“He adapted to the enormous setback of the loss of his voice; he adapted from the old days of yards selling, pen by pen at Newmarket, to putting together huge deals out of the paddock from one part of Australia to the other; and he adapted as the agency profession changed over the four decades he was involved.”

“In an industry that is becoming increasingly sanitised and regulated, Jimmy Matthews was one of the industry’s last remaining true characters and individuals,” Mr Barton said

For many years Mr Matthews did valuations of large northern Australia’s largest pastoral assets, flying from property to property looking at pasture conditions and stock with pilot, Craig McNab, on Landmark’s behalf.

In his heyday, he was one of the most prominent bull buyers at northern Australia’s largest bull sales like Rockhampton’s Brahman Week and National Droughtmaster sales, buying enormous runs of herd bulls for northern clients as far distant as the Kimberley.

He was also a great supporter of the campdraft industry – his son Raymond won a Warwick Gold Cup – and was instrumental in the establishment of the highly successful Tamworth Stock Horse Sale, now approaching its tenth year.

Mr Matthews was loading heifers as recently as Tuesday, passing away at home overnight, following recent complications with blood clots.