John Hughes, who had a profound influence on industrial relations reform across the Australian red meat processing over almost 40 years, passed away on Wednesday, aged 74.

Known to his inner circle close colleagues as Jack, Mr Hughes left behind a legacy of meat industry workplace reform unequalled by any other. 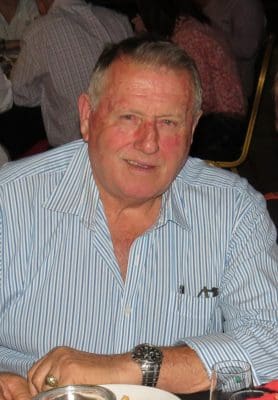 A larger than life, straight-talking character, he had a well-earned reputation for an exterior that was as ‘tough as nails’, but equally, he possessed an inner softness in mentoring young people with ability to progress through the industry.

His fingerprints remain on the modern employment agreements operating today in many of Australia’s largest meat processing plants.

An orphan, raised by the Legacy charity, John Hughes started work on the Dinmore kill floor at age 13. Over the years he worked his way into supervisory and management roles, culminating in his ascension to Human Resources Manager for AMH in 1986.

He was there at the formation of the Australia Meat Holdings business in 1986, where five meat companies – Elders, Smorgan, Tancred, FJ Walker and TA Fields/Metro – joined forces to create the merged AMH. The best talent was mustered from the four companies to create a force of 13 meat plants across two states, unrivalled in size, capacity and management talent, with Geoff Tancred as chairman.

With 13 smaller meat plants across two states, AMH embarked on a rationalisation strategy which involved shutting smaller and inefficient plants and investing in making plants in strategic locations bigger and more efficient. John was heavily committed to growing and reforming AMH, which included investing in capacity and efficiency in four super plants in Queensland: Dinmore, Townsville, Rockhampton and Beef City.

At the cornerstone of the strategy was industrial relations reform. It was clear the strategy was not for the faint-hearted, and John Hughes led the process with great skill, fortitude and courage.

Any change in the highly charged industrial era of the late 1980s/early 1990s was going to be very difficult. John devised a strategy to increase flexible working hours and consign the highly inefficient and unwieldy tally system to history. Unrest, strikes and countless Australian Industrial Relations Commission Hearings ensued.

Ultimately, after AMH shut its factories for some weeks to try to break the deadlock, a breakthrough occurred which saw the restrictive tally system abandoned and flexible working hours implemented. Productivity was improved by 30pc.

During this unsettling period John was issued with death threats and moved hotels every night.  Legend has it that he carried a gun for protection.

Eventually, through sheer tenacity and determination, reform was bought to the AMH business and its remaining plants, all to benefit from a much more competitive, flexible and sustainable workplace situation.

John’s ability to turn complex problems into innovative industry solutions also led him to the United States. Impressed by how effective he had been in the company’s Australian operations, US giant, ConAgra, which by this time owned AMH outright, head-hunted him to head the company’s IR division in its huge US processing operations. He remained in the US in a senior IR role with ConAgra for three or four years.

Later John became something of a ‘hired gun’ in Australian red meat industrial relations issues and negotiation, at different times working for, or consulting to many other successful meat companies including JBS, Teys, Smorgon, Nippon Meat Packers (now NH Foods) and Churchill.

Never afraid to get his hands dirty, he could be found down on the slaughter floor or in the boning room, in the thick of the action. His hands-on approach and understanding of the tasks at hand on the floor, commanded great respect from the union movement and those he dealt with during wage and conditions negotiations over the years.

Additionally he designed and developed many boning and slaughtering aides including the highly successful H-bone puller, now a feature in almost all meat plants in the country.

John loved the meat industry and nights away with John would always be entertaining as he recited stories and anecdotes from the past – not always politically correct, but full of colour and excitement.

He was passionate about identifying talented people on the floor and giving them opportunities through formal training to become the next generation of leaders. A number of those are general managers and senior managers within large processing operations today.

Beyond his direct IR work with major processors, John Hughes was one of the instigators of today’s MINTRAC meat industry’s training and skills development body established in 1993, spending 20 years as chairman.

To this day, the entire beef industry continues to benefit from the reform that was driven by the tough, competitive, tenacious, but fair John Hughes.

John Hughes – A Legacy That Should Not Be Forgotten

For those in today’s industry, many would identify one of John’s great contributions was as Chairman for almost 20 years of MINTRAC, the industry training institution that he nurtured from its uncertain beginnings in 1993 to the central capability that it is today as one of the processing sectors key training platforms.

John, however, has left a far greater legacy that most would not fully appreciate, but is one that all sectors of today’s supply chain from livestock producer to exporter, benefit from every day – one that was only won over many years with commitment and dedication that involved hard fought and very costly legal, political and workplace battles  – it was the fight in the meat processing sector over industrial relations and tallies.

Tallies had been part of the processing sector since the 1930s as a form of incentive based payment. They had a substantial impact on profitability, abattoir size and throughput. Prohibited during WW2 they reappeared in the late 1950’s via provision for piecework schemes with Government approval. That approval process continued to evolve and by 1970, tally systems became established across the industry.

The essence of the argument against tallies was that they limited production and thereby economies of scale with the simple effect of substantially increasing unit labour costs.

The massive increase in beef exports to the US from the early 1960’s masked to some extent the costs and inefficiencies in the Australian processing sector from the tally system. By the 1980’s however it was apparent that the industry could not continue to be globally competitive unless substantive reform of workplace practices occurred that would allow greater economies of scale, greater efficiency and reduced unit costs.

John Hughes was then Human Resources Manager with Australia Meat Holdings. The AMH consortium established in 1986 was all about plant capacity utilisation which sought to reduce unit processing costs.

The tally system was a major constraint to that goal. AMH increasingly saw the need for industrial relations reform and John Hughes became the centre point for that objective, a process that ultimately took over a decade of conflict and disruption to see through to the end.

While there were some early skirmishes, round one appeared in earnest at Portland in South Australia in 1988. It began with mass retrenchments and quickly moved to a plant lockdown that divided the whole town of Portland with the town population all taking sides in what became a bitter and divisive dispute.

John remained the focal point in the action. He and AMH held firm on the need for change against strong opposition but ultimately prevailed after a very difficult 12 months. John then began to develop a strategy to take the efficiency gains achieved in Portland to the remaining plants in the AMH consortium Australia wide.

When US giant ConAgra took a stake in AMH in 1991, it gave them the extra funds to mount a major challenge to the long established inefficient and costly workplace practices in Australia.

That fight over many years in the Industrial Relations Commission (IRC) ultimately cost AMH an estimated A$70 million at the time in plant disruptions and lost production. It took most of the decade to settle the issue but once reform was achieved penalty rates were removed and more flexible working hours and pay scales introduced.

The changes allowed AMH to close more marginal plants like Guyra and Portland while expanding others like Dinmore.

John was quoted in the IRC in 1999 advising that as a result of the reforms that “in some plants by agreement they are achieving production of up to 3 times maximum tally within 7.6 hours in boning and slicing and up to 1.75 times maximum tally in slaughtering.”

The productivity increases that ensued from the changes flowed to the rest of the processing sector and as a result the industry at large.

John was uniquely placed to head the case for industrial relations reform having worked on both sides of the debate and his unflinching commitment to bring change for everyone’s benefit was ultimately to the whole industry’s advantage.

It allowed the Australian processing sector to embrace modern workplace practices and more effectively compete in the expanding quality end of the export market in Asia and elsewhere.

All industry owes John a vote of thanks for establishing that platform from which much of today’s greater efficiencies have evolved.

Vale John Hughes – a legacy that should not be forgotten.