Scientists from the Murdoch University Harry Butlers Institute’s Centre for Biosecurity and One Health have been awarded $150,000 to better understand the species of ticks on and near cattle farms in Western Australia. 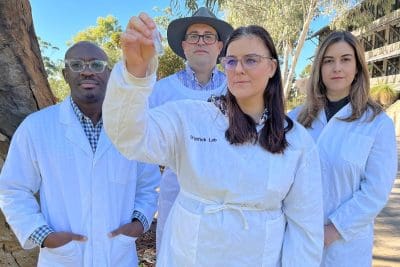 They’ll investigate the risk of tick-associated cattle diseases, along with preventing the entry of other threatening species into the state.

A detrimental threat to cattle, bovine anaemia due to Theileria orientalis group (BATOG) disease, is caused by a blood parasite (Theileria orientalis) which is transmitted by bush ticks (Haemaphysalis longicornis) after they attach themselves onto cattle.

The parasite makes its way into the bloodstream of cattle, where it destroys red blood cells consequently resulting in cattle anaemia.

Murdoch University tick researcher, Dr Charlotte Oskam, said the disease not only has huge implications for the welfare of animals, it also has devastating outcomes for cattle industries across the globe.

“Ticks, and the bugs they pass onto cattle, are a major issue, leading to devastating consequences for the cattle industry including million-dollar production losses, decreased production yields, reduction in fertility, and loss of milk production.”

Present in Western Australia since 1983, BATOG has historically been non-threatening.

However, preliminary work by Dr Oskam and her team indicate a more pathogenic form of BATOG is present and with increasing temperatures due to climate change, this may favour the spread of the tick and BATOG disease.

“There is concern the changing climate will lead to the expansion of tick populations that are carrying the blood parasite, which may lead to outbreaks of the disease,” said Dr Oskam.

“This is especially a concern as higher temperatures and increased summer rainfall lead to favourable environmental conditions for ticks to thrive.”

“If we don’t act now, there will be devastating and disruptive changes to our agriculture industry in the future that will affect everyday people.”

The disease warning comes as Dr Oskam and her team will use the funding to also develop a questionnaire to assess the knowledge, attitudes and practices of stakeholders within the cattle industry.

This feedback will be used to develop sustainable, and effective prevention and control measures that Western Australia’s cattle farmers can adopt to combat the problem.

“To date, there has not been any surveys completed in Western Australia that investigate farmers’ knowledge of tick management.”

“We’re looking forward to working closely with industry stakeholders to develop a framework for industry practice and establish a baseline number for tracking future change in the distribution of ticks.”

In addition, the project will see researchers develop efficient diagnostic technology to provide farmers insight into the bacterial and blood-borne parasites on or near their farm.

“Through new diagnostic technologies and tick surveillance, we hope to better control the spread of cattle disease in Western Australia, as well as stop other tick-borne diseases entering the country,” said Dr Oskam.

The project commenced in July and is supported by the Western Beef Association Inc, together with Murdoch University researchers including Dr Josh Aleri, Dr Amanda Barbosa, Dr Shane Tobe, and Dr Tracey Kreplins from the Department of Primary Industry and Regional Development (DPIRD).

The grant was awarded by the Department of Primary Industries and Regional Development (DPIRD) as part of the Cattle Industry Funding Scheme.

Farmers interested in participating in the study are urged to email the team or learn more about the study via the project website, or Facebook page.