The science of meat production

Professor Robyn Warner from the University of Melbourne’s Faculty of Veterinary and Agricultural Science is a recognised leader in Australian meat science. She was a founding member of the Meat Standards Australia (MSA) Scientific Committee and earlier this year became the first woman to receive the American Meat Science Association’s International Lectureship Award. The latest University of Melbourne’s Voice magazine issued yesterday features the following profile on Dr Warner’s distinguised career as a meat scientist: 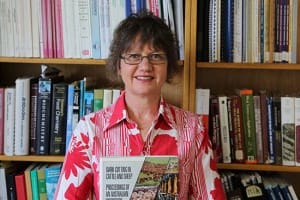 Professor Robyn Warner from the University of Melbourne.

PROFESSOR Robyn Warner is one of those inspiring academics who exude infectious curiosity and have a genuine passion for solving scientific problems.

With her team she investigates the biochemistry and microstructure underpinning the colour, flavour and texture of meat, in order to understand how to improve them to support the future of a sustainable meat industry.

Unless you are a farmer, a butcher, or an enlightened cook, most of us get a little squeamish if we have to stop and think about the journey of how our gourmet burger became lunch.

Yet it is the work done by Professor Warner’s team in understanding the biochemistry of meat from paddock to plate that has been instrumental in ensuring our beef and lamb products are of the highest quality.

There have also been benefits to animal welfare as her research has shown the use of slaughterhouse prodders actually made meat tougher. Whether you eat meat or not, these are important contributions to society and the global food industries.

Professor Warner recently became the first woman to receive the International Lectureship award in 2014 from the American Meat Science Association. This award honours individuals for internationally recognised contributions in the field of meat science and technology as well as active leadership, promotion and dissemination of knowledge for the benefit of society.

A pivotal point in her career was becoming a founding member of the Meat Standards Australia (MSA) Scientific committee, whose aim was to translate scientific research into meat industry improvements. The group’s activities also revised meat-grading systems that were underpinned by science and ultimately resulted in increased economic returns to producers, processors and retailers.

Professor Warner describes the odd sequence of events that led to her involvement with meat research science.

“When I was at school it didn’t occur to me to study agricultural science. It was one of those last-minute decisions when I was applying for university courses. When I graduated I didn’t even think of a research career as my professors implied it was extremely hard to get into, and it was only for the top brainy students. So, I applied for a traineeship with the Department of Agriculture, and was asked to pick from 40 different traineeships. I had my heart set on working with dairy farmers at various locations like Warrnambool, Echuca and Leongatha. Then out of the blue, they asked if I was interested in a job doing research on beef quality in cattle at Werribee. Once again I made a last minute change and said yes I’ll do that, and I did.

“I tell this story to young people as I think it illustrates that you can often not guess the path you’ll take in your career.”

Professor Warner’s path like so many other professors is about making good use of random opportunities among the preferred plans.

“While at Werribee, I became very interested in pre-slaughter stress in animals and how it affected product quality. So I started researching meat and muscle fibres. I found it fascinating. The biochemistry was extremely interesting, so I tracked the papers of researchers in Canada, UK and Ireland as there were only one or two Australian scientists who were doing work in this area.

“Then crunch time came. I needed to do a PhD to answer my scientific questions so I enrolled at the University of Wisconsin in the USA because it was where my husband and I both got accepted for PhD candidature in our respective fields. I sponged up the lectures and loved sharing expertise in protein separation techniques and microscopy. I also made time to visit the various meat researchers overseas. I remember I thought of them as demi-gods but they all turned out to be quite human which at the time was such a relief.”

Professor Warner was recently involved in a panel discussion entitled ‘We are all Flesh’ accompanying a recent exhibition at the Australian Centre for Contemporary Art. It explored our encounters with meat and flesh; ranging from the alluring to those encounters that make us recoil. Flesh is an emotional, psychological and sensitive topic.

“The panel discussion was fascinating, and included commentary from an author who is a butcher and a chef, academics who have expertise in horror movies and an embalmer. What transpired is all our areas can and some ways must be understood as an art and a science.

“I have images of raw, cooked and pressure-treated muscle as seen through a transmission electron microscope. They show detail down to the micron level – you can almost see the proteins. These images are like art to me.”

“Recently, a CSIRO and Canadian colleague and I made a video using confocal micrscopy of a single muscle fibre (cell) heated from 25 to 95 degrees celcius on a heating stage attached to the microscope. We wanted to understand which proteins shrank at particular cooking temperatures. The data (or art) led us to develop a new theory about muscle shrinkage during cooking which challenges the meat science dogma that connective tissue drives the shrinkage during cooking.”