Temporary Bluetongue zone in Victoria to be lifted 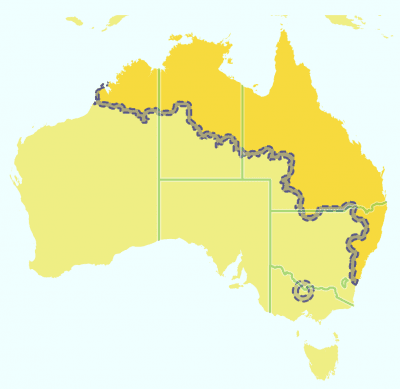 The circle bottom right indicates the location of the temporary BTV zone established south of Echuca in Victoria.

The temporary zone was initially implemented after pre-export laboratory tests found a number of dairy heifers on a property near Lockington south of Echuca had been exposed to the virus.

In a statement this morning Dr Milne said results of extensive testing demonstrate that past exposure of cattle to the virus through local transmission has occurred in a small number of animals.

The implications of the findings have been comprehensively reviewed with the conclusion that the temporary BTV zone can now be lifted.

The decision followed extensive consideration by Victoria and the national Animal Health Committee, which comprises representatives from the Commonwealth and States and Territories.

Dr Milne said more than 2500 dairy and beef cattle across 103 herds had been sampled in response to the detection, as well as other animals within a five-kilometre zone of where evidence of exposure to the virus was first found.

“Our investigation has shown that the animals that triggered the surveillance came from the recognised BTV transmission zone in New South Wales,” Dr Milne said.

“There is no current evidence of the virus circulating in the temporary precautionary zone, or presence of the insect that spreads it.

“The likelihood that bluetongue virus has become established in Victoria is low,” he said.

Victoria will continue to monitor for BTV using ‘sentinel’ herds and by increasing monitoring of the insect that is known to carry the virus.

The Australian Government will advise trading partners and exporters about the lifting of the zone.

“Today we are keen to acknowledge and thank producers and industry, as well as our own staff, for their collaboration, support and dedication to what was a significant surveillance effort,” Dr Milne said.

A community meeting to discuss the findings of the work to date and the forward surveillance program will be held in Lockington next week.