The exasperation in WA Labor Senator Glen Sterle’s voice was palpable when he commented during a recent Senate inquiry hearing just how divided the grassfed beef cattle industry was.

“God help us if this industry ever got its act together. What a powerful lobbying force it would be,” he said.

“But from what I have witnessed so far it is far from being united.” 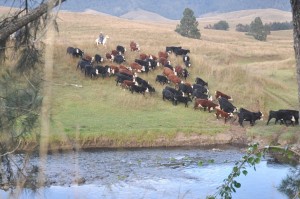 The comments were made in the Senator’s capacity as chair of the Senate Committee inquiry into systems and structures governing levies in Australia’s grassfed beef cattle industry.

Agriculture minister Barnaby Joyce initiated the inquiry in November last year in a bid to address long-running producer divisions and to give all interest groups the opportunity to argue their case for reform in an independent forum. Hundreds of submissions were received and dozens of producers and industry representatives gave evidence at six public hearings across Australia, which wound up last week.

Producers are hurting and as a result MLA and CCA are being kicked, and kicked hard, including for things that they have little realistic capacity to influence, such as the drought-forced cattle tsunami that is currently driving cattle prices down. But to dismiss producer concerns as simply a function of current low cattle prices alone ignores the long-running issues that producers have expressed over the years, and which effectively led to this inquiry, about the effectiveness of industry representation and levy expenditure, and the fundamental long-term declines they have experienced in terms-of-trade.

Time and again, Senators have heard how beef prices have traded up and down within a similar range without trending higher for more two decades, while production costs have climbed relentlessly higher and higher.

That Australian producers capture only around 25pc of the final retail or export value of their product, while their counterparts in the US capture around 50pc and in New Zealand 40pc, was also regularly raised as a cause of grower frustration.

Senators have heard appeals during the inquiry to support widely varying options ranging from direct Government intervention to force more competition and transparency in downstream sectors of the supply chain, replacing existing structures with a single producer body to take full control of all grassfed levies to simply making a few minor tweaks to existing bodies to improve their accountability, democratic integrity and effectiveness.

The basic question Senators will be trying to consider in making their recommendations is how, within the scope of the terms of reference they have been given, industry structures and levy arrangements can be changed to deliver improved profitability to grassfed levy payers. One difficulty with this type of inquiry is that many of the Senators involved (with some notable exceptions) have very little in-depth understanding of the grassfed cattle industry, and therefore little capacity to know if the versions of past events they have been given are accurate accounts or sanitised misrepresentations.

Giving the daunting task the Senators now face to distill mountains of evidence and contrasting views into a handful of recommendations for the Minister, it would be no surprise to see the final report contain a recommendation that a more comprehensive, independent review by a panel of experts be commissioned to fully examine how the industry has arrived at its current point.

Compromise for unity must be the goal

Unfortunately what the inquiry has perhaps demonstrated above all else is, as alluded to by Senator Sterle, just how deeply divided the grassfed cattle industry has become.

Consider for example how many groups claimed to speak for Australian grassfed cattle producers throughout the inquiry: the Cattle Council of Australia (which is the officially prescribed body representing around 15,000 paid State Farm Organisation members), the Australian Beef Association, (which claims around 1000 paid members, but provides no evidence to support it), followed by the much smaller United Stockowners of Australia, the Australian Meat Producers Group, the Concerned Cattle Producers group, and various State Farm Organisations and regional production groups.

The inquiry has clearly demonstrated that the industry desperately needs to speak with one voice. For that to happen every producer in Australia must be given equal opportunity to contribute to and debate policies in a single tent, and then all producers must accept the majority decision and get behind one organisation so the industry can talk with a single, united and powerful focus.

The industry’s history has instead seen disaffected groups criticise existing structures as lacking in fairness and democracy and then leave to set up their own tents instead, creating further division, disharmony and ultimately even more industry weakness.

As the Senate inquiry heard the Cattle Council of Australia has sought to counter criticisms it does not truly represent the entire grassfed industry by introducing a new direct membership pathway that gives producers who are not members of State Farm Organisations (SFOs) an opportunity to contribute to national policy development and debate. However the take-up rate has been disappointingly slow to date, with just 150 cattle producers paying $110 to become direct members since the new pathway opened in January.

CCA’s opponents say the reason is clear: despite allowing individual producers to become members, the CCA board remains dominated by SFO-appointed board members, and direct-paying members still have little real say or influence in the organisation. CCA’s leaders point to that fact the council’s meagre $1.3m annual operating budget is still highly dependent on SFO membership fees, worth around $400,000 a year, and to strip SFOs of their current right to board seats would mean to cut off a critical source of revenue that income from direct membership income currently can’t come close to matching.

It is something of a chicken and egg argument. The council needs to build up direct memberships but is struggling to do that while the perception is there that direct-paying members have little real influence.

CCA has said that as more individual producers come on board and membership fees from that channel increase, their representation relative to SFOs will increase proportionately on the board. In future, the council says, it is possible that direct members will ultimately have as many or even more seats than SFOs.

A key issue that dovetails with this debate is CCA’s request for legislative change to allow it to receive about $4 million a year in direct funding from the $54m generated annually in compulsory $5 per head cattle transaction levies. CCA says that funding will give it the resourcing grunt it needs to more effectively oversee grassfed levy expenditure on behalf of all producers and to undertake more effective policy development work for the benefit of all producers.

The council’s position is that, were that to happen, and the Memorandum of Understanding between MLA and CCA was strengthened to ensure MLA does not just have to consult with CCA but also do what it says, the vast majority of concerns expressed by producers about MLA transparency and performance etc could be properly managed and put to rest.

If the Senators, and in turn the Federal Government, agree to those measures, the funding CCA receives from SFOs will diminish in importance to the council’s annual operating budget, and would provide greater scope for the council to increase representation of direct members on the board (On the issue of future funding, CCA says income from membership fees (such as from SFOs and individual members) would still be required to fund future ‘agripolitcal activity’, which cannot be funded out of socialised levy funds).

Direct levy funding would also remove the budgetary constraints that have seen CCA enter into controversial funding arrangements with MLA to conduct consultation services with producers in return for up to $500,000 in indirect levy funds. Controversial because critics say funding from MLA to CCA compromises CCA’s ability to independently oversee MLA. This is something CCA stridently denies, insisting that the joint approach to consultation with producers make sense for both organisations. Despite the concerns Senators spent little time questioning CCA about this issue during the inquiry.

Where the committee’s Senators have collectively landed on the various issues before them should become more obvious this week when they are due to release an interim report. It is also worth noting that the committee can only make recommendations, and that the Government is under no obligation to accept or act upon what Senators recommend.

But, regardless of whether this process achieves anything meaningful in terms of structural improvements or not, it can only be hoped that from this point onwards, all industry stakeholders get the message that a divided industry cannot progress.

It is better for all stakeholders to compromise and work together under an imperfect model than to remain divided in pursuit of industry-wide agreement on a perfect model that will never be achieved, and will fuel only continued disharmony and industry weakness along the way.

As Glen Sterle said, just think of what this industry can achieve if it actually starts working together.