TALENTED young people working across the agri-business sector still have time to nominate for the 2016 Zanda McDonald Award.

Applications for next year’s award, open to individuals 35 years or younger, close on Friday October 30.

The Zanda McDonald award seeks to recognise innovative and talented young people working across the livestock or broader agri-business sectors in either Australia or New Zealand. 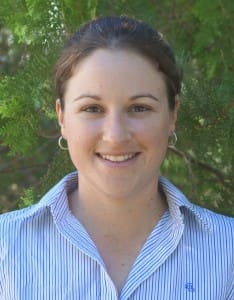 Ms Hegarty has just returned from an extensive tour of New Zealand, where she spent time being mentored by progressive and innovative livestock industry leaders across a range of sectors.

Her prize also included a place on the 2016 Rabobank Farm Manager’s Program, $1000 cash, and perhaps most importantly, access to 130 of Australia’s finest producers and agri-business people who make up the PPP Group.

The annual award cycle starts again with the closure of nominations for the 2016 award on October 30. A shortlist of six applicants will then be announced in November, who will be invited to attend an interview. From that group, three finalists will be announced in December/January 2015/16.

Judges will be looking for “Zanda-like characteristics of leadership, passion, drive, ambition and commitment to their field.”

All three finalists will be invited to attend (all expenses paid) the 2016 PPP Conference in Wellington, New Zealand next March, when the winner will be announced.

About the Zanda McDonald Award

The Zanda McDonald award is a PPP initiative which aims to preserve the legacy of the late Zanda McDonald – as well as assisting young agri-business people on their chosen career path. Launched in 2014 and born out of mateship and respect for one of agriculture’s natural leaders, this award aims to recognise dynamic and progressive young individuals working in the agri-business sectors in Australia and New Zealand.

Zanda McDonald was a prominent identity in the Australian beef and livestock industry and a foundation member of the PPP Group. He died in April 2013 at the age of 41, following an accident on his Queensland cattle property.

“Zanda was one of life’s true inspirations and true gentlemen. He was an astute businessman and yet equally at home driving stock or fixing machinery,” said PPP Group chairman Shane McManaway. “A devoted father and husband, he achieved great things in a short space of time. He did this with quiet determination and a natural instinct for doing the right thing.”

Next year’s prize, with a total value to the winner and runners-up of nearly $30,000, includes:

See Beef Central’s coincidental report this morning, “Animal pain relief: What options are available?” – a field in which Mr McDonald was an earlier pioneer and innovator.