US beef analyst Don Close had no idea his recently-released report examining potential future trends in US beef production, driven by the growing consumer preference for ground beef, would attract such attention. Since the report, “Ground Beef Nation: The Effect of Changing Consumer Tastes and Preferences on the US Cattle Industry” hit the streets a few months ago, he has been deluged with more than 150 interview requests from trade and mainstream media in the US and elsewhere. What’s driven it? 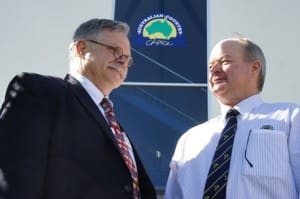 AS Australia well knows, American consumers love their ground beef. They want increasing quantities of it, and they want it priced more competitively, according to economist, Don Close’s recent report, “Ground Beef Nation: The Effect of Changing Consumer Tastes and Preferences on the US Cattle Industry.”

The key question raised in the report is whether the beef industry should adjust its supply chain processes to produce less-expensive ground beef with greater efficiency.

The report points to a remarkable upsurge in ground beef consumption, with ground beef now representing close to 62 percent of all domestic US beef consumption. Another striking ground beef statistic, which shows it’s not just home cooks buying ground beef for a quick meal, is the fact that burgers now make up 72pc of beef servings in US restaurants, according to independent research. Steak came in a distant second, at just 9pc.

The report reflects back on the late 1990s era, when efforts focused on improving beef’s consumer image. The industry sought to offer consumers a quality eating experience from every beef product. Objective quality measures improved, yet demand continued to fall. Americans consumed 95 pounds (43kg) per year in 1974, declining to 54 pounds (24.5kg) per year in 2013.

While quality and convenience are important, Mr Close says cost is the most likely driver of the continuous decline in US beef consumption, especially when compared with other competitive proteins. The same is likely to apply in Australia.

US retail chicken prices increased 24pc from 2000 through 2013, using non-deflated numbers, while pork jumped 41pc, according to the report. Over the same period, all-beef prices soared 78pc. And while consumers are continuing to demand beef, they are spending their discretionary food dollars on cheaper cuts.

“The US beef production model hasn’t changed, however, even as we’ve become a ‘ground beef nation’,” he says.

“Burgers and tacos are on the plates and in the drive-thru’s of Americans, while at the same time the US cattle industry continues to operate within an infrastructure that pays a premium for high-performing cattle producing high quality beef,” he said.

“Under the existing business model, the US cattle industry manages all fed beef as if it were destined for the centre of the plate at a white table cloth restaurant. The industry aims to increase the quality (i.e. marbling) of a small portion of the carcase, even as the majority of the carcase heads for the grinder.”

“While more than 60pc of the beef carcase can find its way into lower-value or ground products, the current beef production model requires most of these animals to be fed an expensive ration that aims to perfect the quality of, at best, 30pc of the carcase,” Mr Close points out in his report.

“Essentially, the industry is producing an extraordinarily high-grade product for consumers who wish to purchase a commodity. This is the crux of the problem.”

Ground beef as the ‘objective’

Mr Close says instead, perhaps the industry should consider raising between one-third and one-half of its cattle with ground beef as the objective, rather than as a ‘by-product.’

In short, he thinks the beef industry needs to consider selecting cattle early in the production cycle for two distinct outcomes – the high-end USDA Choice market, and the commodity ground beef market, and then manage each group accordingly.

“We estimate that the number of cattle in the upper end grades of Choice and Prime would not change significantly,” he said. “But just by ensuring lower-quality genetics do not enter the high-quality system, the performance of the top end would be improved through efficiency gains.”

While his comments relate specifically to the US industry, it’s hard not to find some resonance in the Australian beef industry setting.

“Identify an animal’s genetic potential and manage it toward what that market requires,” Mr Close suggests.

“That would mean separating high and low-quality genetics. Such a system could be more cost-effective because the cattle not destined for the USDA Choice and Prime markets could remain on lower-cost forage longer and have a shorter feeding period on a lower-energy ration.”

His suggestions were really about “listening to consumers, whose purchasing habits reveal what they want.”

“While change is often difficult, the industry can either adapt to the realities of the modern end-user market or continue with the status quo of contracting supplies and shrinking demand,” Mr Close said.

However if the US cattle industry continued to produce ground beef in a structure better suited to high-end cuts, the result would be continued erosion of market share.

The report also explores the trend of changing consumer preferences and the role pricing plays in the notable decline in beef consumption. Industries like pork and chicken that produce competitive proteins have grown and become more efficient, making their products more readily available at competitive prices.

“In order to compete in a ‘ground beef nation’, the industry must change to a production model that determines the best end-use of an animal as early as possible,” Mr Close said. “To keep beef competitive with other protein choices at the meat counter, a new system for end-use categorisation that influences genetic selection, calf selection, cattle management, production costs, and feeding regime throughout the life of the animal is required.”

While changes in the commercial feed yard sector would be ‘minimal’ under the system he proposes, Mr Close says the meat packer would feel the greatest affects, “because it would alter the way cattle are currently priced. It could also force radical changes in the fabrication process,” he says.

The share of the calf crop directed into the ‘ground beef’ stream should be left on some type of natural forage for a longer period of time to capitalise on lower costs of gain, the report suggests.

“We’re not advocating this as a grass-fed production model for the US, but rather a modified feeding approach where animals spend more time on pasture before going to a feedyard. During the feeding period, they would consume a lower-energy ration than animals bound for the USDA Choice trade,” he said.

He stressed that the report did not advocate abandoning lotfeeding as a critical part of the US beef supply chain. “An efficient lean-meat play will still rely heavily on the feedlot sector in the US,” he said.

“A lot of the conversations that the report has stimulated in the US have carried a perception that it is in some way anti-feedlot. That could not be further from the truth. What I am advocating is that we firstly use tools like genetic markers to determine the best end-use for each animal, as early as possible. For the lower end of the gene pool, we’re simply advocating leaving them on some form of forage for a longer period of time, to let them grow frame structure on a lower cost ration, so that when they go the feedyard, instead of a 170/180-day feeding window, let’s look at 100 days, on a lower energy ration.”

“I’m not bashing the pursuit of quality. Our products like Certified Angus beef are great products, but it’s not the whole answer; it doesn’t fit all markets’ needs. The market is calling for greater diversity.”

Beef Central asked what the concept meant for the use of production tools widely used in the US, like beta agonists and HGPs.

“If we do adopt a more streamlined, more efficient production model for some cattle, then it does, absolutely, support the continued use of scientifically validated production tools like these,” Mr Close said. “It’s all about efficiency.”

One of the outcomes would be that the industry would not be pushing lower quality cattle into a grading percentage they could not realistically or efficiently achieve. It could also reduce the tendency to over-feed an animal in the hope of reaching a higher grading rate, he said.

The ‘ground beef’ market animal would, in theory, finish at a marginally lower weight with a carcase in which the rib and loin could still comfortably reach a USDA Select to Low Choice grade. For the remaining share of the carcase, reaching a target of 80pc chemical lean (CL) trim and grinding the balance of the boneless beef to meet the growing demands of the domestic ground beef market would be the intended use, the report suggests.

Mr Close said he did not believe the report held any ‘threat’ to a beef breed like Angus, which had selected for years for meat quality traits.

“Clearly, there is always going to be an excellent demand base for that white tablecloth sector, and that’s not going to change.”

“Whether they agree with the key messages in the report or not, producers I speak to a lot tell me that the ‘Ground Beef Nation’ report has at least brought to the table a topic that had been avoided in the US for a long time,” he said.

“We’ve been so focussed on curing the demand issue with quality, that anything that comes along like this that breaks that norm or expectation, was inevitably going to polarise opinions.”

Asked whether his proposed model had application in Australia, Mr Close said it was a ‘mixed answer.’

“Because the Australian production is relatively heavily based on grassfed, and lotfeeding is relatively smaller, I’m hesitant to think it has as direct implications here. But here’s where it connects: as ground beef usage continues to grow in the US, as US production tries to build a base and recover from drought, the number of US females collectively, and the number of cull cows coming to market are going to diminish.”

“Equally, with the drought Australia has experienced in the past 18 months and cow reduction that has occurred, there’s going to be a huge drop-off in the supply of cattle coming to market. As the overall growth in demand for ground product grows, a rising tide is going to raise all ships.”

“If you take North America, Australia and Brazil, is the US going to be increasingly dependent on its historical relationship with supply out of Australia/NZ and the shipment of imported lean grinding beef? Absolutely we are. But where our worry is, is that if we have that demand out of the US, coupled with unprecedented growth in exports to China, and a declining cow herd, is Australia going to be able to fill all those export orders? I don’t know that they can.”

“Something has to give, and I think it is already underway. If you look at the US domestic retail beef price indices, and the rate that beef prices are running away from the other meat proteins, you can look at it two ways. From the consumer’s eyes, as beef gets higher, the frequency of consumption drops off, as they chose alternatives. But the more concerning factor is the changing price spreads between the species, and it becomes increasingly hard for any food service operator to feature beef on their menu. Unquestionably they are going to select away from beef.”