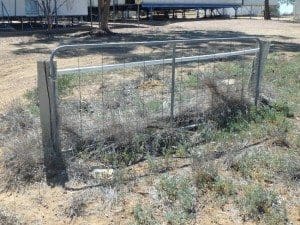 Gate similar to those stolen 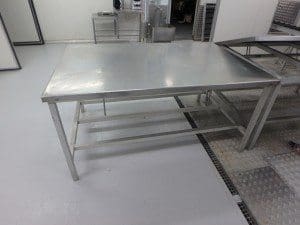 Table similar to that stolen

It is believed the theft has occurred between August 30 and September 3 where two 3-metre mesh gates were removed from the entrance of the premises.

One of the gates may have had a slight bend in one of the uprights.

The offenders have had to undo nuts, remove washers and brackets before lifting the gate from the bottom hinge.

This is the second time property has been stolen from the location.

In March this year offenders have attended the same location and removed a stainless steel table used in the preparation of meat products.

The table was quite heavy and it is believed more than one person may have been required to remove it when taken.

The table is approximately 180cm long and 90cm wide.

Anyone with information which could assist with this matter should contact Crime Stoppers anonymously via 1800 333 000 orcrimestoppers.com.au 24hrs a day.

What is your diesel level?

A 25-year-old male from Toowoomba was recently fined $1300 dollars and ordered to pay $1290 restitution after he pleaded guilty to stealing diesel fuel from a farm storage tank south west of Toowoomba.

Detectives from the Toowoomba SARCIS were able to obtain footage of the offence and evidence which led to the person responsible for stealing nearly 1000 litres of fuel late one night.

Police said it was a good result which came about because the farmer was able to be pro-active with his security systems enabling police to identify the offender in a short space of time.

SARCIS investigators are asking primary producers who maintain fuel storages to firstly be aware of the quantities of diesel in their tanks and secondly to ensure that the tanks are monitored and kept secure.

Anyone with information which could assist with this matter should contact Crime Stoppers anonymously via 1800 333 000 orcrimestoppers.com.au 24hrs a day.

The Richmond LAC Rural Crime Unit is currently investigating the suspected theft of 21 head of cattle (mixed breeds) from a property on the Coraki Ellangowan Road approximately 13 km west of Coraki between the 21st of July and the 28th of July 2015.

It appears offenders have removed the hinges on the front gate to the property and pulled the gate open, allowing access by a vehicle or cattle truck.

Police would like to speak with any members of the public who may have been in the Coraki Ellangowan Road area west of Coraki between the 21st and 28th of July and  any suspicious or foreign vehicles/cattle trucks or persons in the area.