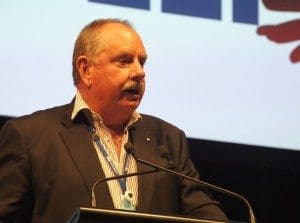 He succeeds Ross Keane, who has served in the role for the past six years.

Head of the RMAC selection committee, Jeff Murray, congratulated Mr Mackay on his appointment against a field of exceptional candidates. Beef Central understands about 50 applications were received, including strong contenders from both within, and beyond the red meat and livestock industry.

Mr Murray said a core part of the chair’s role was to drive sector strategy and growth.

“Mr Mackay’s appointment reflects RMAC’s commitment to delivering on the Meat Industry Strategic Plan 2020 and unlocking $7 billion of potential growth in the Australian red meat and livestock industry,” he said.

Mr Mackay has held a range of senior leadership positions across Australian agribusiness. He is about to step down as managing director of Rangers Valley feedlot and branded beef supply chain based out of Glen Innes in northern NSW. While in that role for the past seven years, he served a term as president of the Australian Lot Feeders Association.

Earlier in his career Mr Mackay was managing director of the Australian Agricultural Co, and served in senior management positions with Elders. His contribution to industry affairs was recognised with the Centenary Medal awarded by the Prime Minister for distinguished service to primary industry.

As reported earlier on Beef Central, another agribusiness leader has joined the RMAC Board.

“With our new leadership team in place we look forward to delivering outcomes for the Australian red meat and livestock sector in partnership with industry and government,” Mr Murray said.

Mr Mackay will assume the chair from Ross Keane on 1 October.