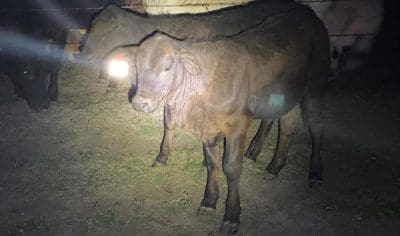 A ROAD safety campaign using reflective ear tags to reduce the number of cars colliding with cattle on regional roads could be expanding after the success of the initial trial.

Police in the Central Queensland town of Nebo have been spearheading the trial, delivering tags to producers across the shire. With initial success and plenty of media attention, the program could be expanding with interest from other jurisdictions across the state wanting to join in.

Losing stock on roads is not a new issue and neither is the use of reflective ear tags to fix them, with one sales representative telling Beef Central he is asked about them a couple of times each year.

Nebo Police officer in charge Senior Constable Andrew Perrett said he had been fielding plenty of calls since launching the program.

“With recent dry spouts, we’ve seen cattle push through fences to get to the greener pastures on the opposite side of the road,” Snr Constable Perrett said.

“Not only are cattle struck on the roads, but property owners sometimes come across their own animals on long windy, unlit roads and strike animals sat on roadways. This initiative can reduce those sorts of incidents and look to welfare of the animal also.”

More ear tags to be supplied for the program

Ear tag company Allflex has decided to partner with Snr Const Perrett to extend the program into other parts of the state. “For Allflex this gives us the opportunity to see the potential contribution a reflective ear tag could make to road and animal safety on our rural roads,” an Allflex spokesman said.

“While reflective ear tags have been spoken about for many years, this pilot and our involvement gives us opportunities for evaluating and informing future development.

“We’re thrilled this gives a practical opportunity to demonstrate the feasibility of a reflective tag and the practical potential in making our country roads safer, while understanding the commercial opportunity in Australia.

“It’s a worthy concept to explore and find other ways rural and regional communities can be supported.”

The Road Accident Action Group (RAAG) has been one of the biggest advocates for the reflective tags, promoting it as part of its Stock on Roads campaign.

The “Emergency Plus” App, gives exact road location and Latitude and Longitude which can connect to Triple Zero Operator in the event of an emergency. It can also be used to obtain user’s GPS location prior to reporting via 131 940.

The “Snap Send Solve” App, also reports exact location, with the user having ability to upload photos, it will send automatically message the council area you are in nationwide.

RELATED: When cattle and cars collide, who is responsible?