RED Meat Advisory Council chair Don Mackay has laid out a confident vision for the future of Australia’s red meat industry, one in which millennials readily queue to buy red meat because they understand it is good for them, good for their children, good for the environment and a wonderful eating experience.

But assuring that future requires breaking the cycle of endless attempts at agri-political restructure and reforming industry bodies into “a professional and powerful organising force”, he told a Rural Press Club of Queensland lunch in Brisbane on Thursday.

Despite constant and relentless attacks from those seeking to destroy animal agriculture, Mr Mackay said the industry should not lose sight of the very strong support it still enjoys from customers, community and government.

94 percent of Australian consumers consume, love and trust red meat. Of the small percentage of people who describe themselves as vegetarians, two out of five still identify as occasional meat eaters.

Mr Mackay said the industry must get smarter about harnessing the power of these 23 plus million Australians who love red meat – a powerful consumer club who are “our best political assets and ultimate advocates”.

The industry needed the whole community, even those who don’t eat red meat, to better understand it to reduce the developing negativity.

As part of this process RMAC has developed an idustry affairs task force which is taking a whole of supply chain approach to proactively engaging with consumers and the broader community, dealing with misinformation more aggressively than ever before, and engaging loyal consumers to help promote red meat.

Ensuring consumers are well informed about the environmental credentials of red meat production is also essential to this process, he said, through continuing to build an evidence-based record showing that Australian livestock producers, who manage 74pc of the landmass, are part of the solution, not the problem.

This also included ensuring producers are fairly and properly rewarded for their role in managing Australia’s land mass in a sustainable way in future.

“Our environmental credentials that deliver Enviro-meat will be a significant reason that discerning consumers will seek to buy our products, not a reason to avoid it.”

Mr Mackay said his vision is that in 2030 red meat will be the first choice for millennials and their kids “because they know it is good for our health and our planet and they are willing to pay more for it”.

Mr Mackay’s address was anchored on key lessons learned about public and consumer perceptions of red meat from his extensive experience in the industry.

From a farming and grazing family background in western NSW, Mr Mackay spent 30 years with Elders before serving for nine years as Managing Director of AACo, during which time the company introduced Wagyu cattle, re-listed on the ASX in 2001 and developed its beef brands; and eight years as Managing Director of Rangers Valley, one of Australia’s leading high-quality branded beef companies supplying branded grain-fed products to over 20 countries around the world.

Mr Mackay said Australia’s red meat industry has failed to adapt and modernise with many opposing organisations in civil society, and said it needed to be as good as the likes of WWF and Animals Australia in continually and effectively prosecuting its case to the community.

Climate change and weather events such as the recent Australian bushfires had become a touch point for activists in “proving” that agriculture is destroying our world: “It is an easy excuse for people to have one less red meat dinner and feel they are saving the planet.”

Valuable progress had been made, with the Australia’s red meat sector sending a clear signal to its markets by committing to have net zero emissions by 2030, which included a dedicated long-term research program to reduce methane generated emissions.

However, it was also clear the industry’s current approach was not cutting through: “we are being drowned out by the sheer volume of conflicting information and exaggeration as to the impacts of red meat production on the environment,” he said.

“We must deal with issues now. Left unchallenged it will inhibit our ability to capture the opportunities and accelerate a decline in support of our industry.”

In order to achieve a better red meat future, he said a clear vision was needed, with well-funded, professional, global looking industry organisations providing the best advocacy, policy, marketing and research they can, and more effectively harnessing the power of the industry’s  millions of customers, diners, retail outlet and workforce members.

“We are a big, serious business community of national significance and looking out to 2030 we need to act like it and influence government policy and community thinking.”

The industry strategic plan or “Red Meat 2030” document launched in October 2019 outlines a pathway to double the value of Australian red meat sales as the trusted source of the highest quality protein, to grow the pie from $28.5 billion to $57 billion.

Without action, current growth and demand trajectories would put industry value at $45 billion by 2030.

Mr Mackay said the industry has to get past the ‘us’ and ‘them’ mentality and recognise as a supply chain that “we are all customers to each other, and these relationships should be our most important.”

The industry had achieved bold and significant reforms in the past, all of which had encountered fierce initial resistance, including Meat Standards Australia (MSA) in 1998, the national rollout of NLIS in 2004, the Australian Beef Sustainability Framework in 2015, and the announcement of the Net Carbon Neutrality goal in 2017.

“Nothing good comes easily, and by necessity in both industry and in business, you will always be dragging the squeaky wheel to the finish line.

“These are not the people for whom we should set ambitious policy and investments, nor are they the ones we can hold back progress for.”

In July 2019 an independent industry task force released a White Paper recommending the creation of a new organisation (to be called Red Meat Australia) to become a powerful organising force to oversee policy, levies and industry strategy; a second body to combine the functions of AMPC, LiveCorp and MLA into a single red meat research provider; and a third body to combine the functions of the various integrity agencies into a single forum.

Over the course of that process, and considering the challenges facing the industry from the anti-meat movement to managing environmental challenges, he said it has become clear that “pursuing a Red Meat Australia-style organisation makes sense in whatever form and scale is best suited and agreed by industry”.

While ongoing discussions are yet to reach firm agreement on exactly where the reform model will ultimately land, Mr Mackay provided some further details on where the internal discussions have progressed to so far:

– Red Meat Australia will be a single, or a shared voice of Australian red meat and livestock. It will

It would no longer, however:

The second company, a single levy payer organisation for industry-led marketing, innovation and extension, would have a skill-based board, and would be levy-payer owned with levy payers retaining autonomy across prioritising funds in a manner that works for their businesses.

Another change appears to be that marketing would no longer be removed from the research arm, with the traditional marketing role performed by MLA, AMPC and LiveCorp to remain in this business.

In broader agricultural industry discussions it has been rumoured that a push is on to create a mega agricultural RDC that would cover all livestock sectors such as beef cattle, sheep, goats, pork, chicken, dairy and wool, presumably motivated by the desire to create greater efficiencies and reduce duplication costs.

However Mr Mackay’s comments yesterday suggested that there is little appetite for that concept among red meat sector representatives.

Mr Mackay said the proposed change was not “change for change’s sake” and in coming months a business case will be developed analysing all key financial and non-financial issues involved in the proposed reforms.

Over the next twelve months following the completion of a PWC report the industry expects to create the third company, which will form a single integrity desk for all Australian red meat. 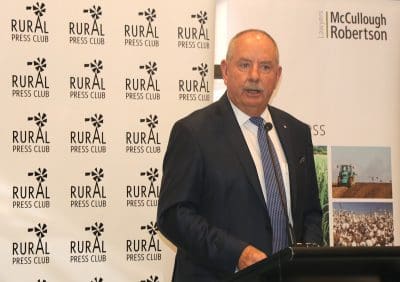 Mr Mackay also touched on the uncertainty surrounding the future role of Peak Industry Councils under the proposed reforms, and particularly whether policy development can or should be funded from levy funds in future.

“I believe in the current environment there is an appetite for this to change and for levies to fund those national bodies for good policy development and promotion for their individual issues and be levy payer centric organisations,” he said.

A clear definition of political activity would be required, which excluded use of levies to fund political campaigns, for example, but which permitted the legitimate use of levies for good policy development and advocacy.

“It is our view that Peak Industry Councils should be in part funded by levies if they are to be part of our 2030 future because of the essential nature of industry needing to lead technical policy development from within, and we believe there is an appetite from the Commonwealth both politically and within the public service to deliver this significant change.”

‘Time to get on with it’

Mr Mackay said it was not practical for the industry to wait to try to achieve across-the-board consensus.

“As an industry with our many stakeholders and many competing interests we have made it extremely easy to be political targets by both decision makers and those within the industry,” he said.

“It has been a divide and conquer approach which has made it very easy for governments to say ‘no’ because they can hide behind the ‘need for one voice and so-called consensus.’

“Politicians best of all know that one voice and ‘consensus’ is simply not practicable, we need look no further than the National party room this week as an example.”

Mr Mackay said big changes to the industry had always been made by leaders “with genuine vision and a very thick skin”.

“We certainly don’t want to be famous for perpetuating endless attempts at agri-political restructures that does little for our red meat businesses. We want to deliver a model that can properly represent their constituents.

“I know spending the next ten years complaining about the increasing anti-meat movement, the lack of leadership in response, perpetuating the plethora of small breakaway stakeholders and good old agri-politics is simply not good enough.

“We need to get on with it. Put aside our individual biases and help raise the tide and lift all vessels.”

Despite the potential disruptions caused by another change in agriculture minister, Mr Mackay said the fact the key portfolio was returning to David Littleproud who well understood the process from his previous time in the role was “ a positive in so many ways”.

“He was actually the person I sat down with and negotiated where this would go a couple of years ago, in fact with a then retail butcher and grazier called Susan McDonald who has since become a senator , she and I did the negotiation, so I think we deal with it, it is up to us.”

Time for next generation of leaders

Mr Mackay also announced that he will be retiring from this role as RMAC chair in October of this year, saying it is time for the next generation of leaders to step up and deliver on “the wonderful opportunities” the industry has in front of it.

“Finally I look forward to observing my vision of the millennials queuing for red meat in my local butcher shop because it is good for them, good for their children, good for the environment and as always, a wonderful eating experience.”