But because of the school’s inner-city location, potential employers from the cattle industry may be reluctant to consider city-based school-leavers as recruits, because of their perceived lack of hands-on experience. 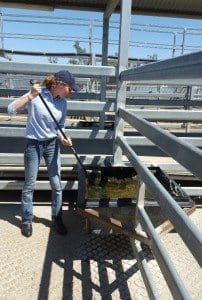 CSHS has access to five acres of land on the school campus, plus the nearby Oxley Common, giving the students an opportunity to run some cattle and complete a Certificate II in Agriculture.

But in order to better compete with school-leavers from rural and regional areas where opportunities to engage with the cattle industry may be greater, Year 12 Ag curriculum students at Corinda have worked hard this year to find new opportunities to build their resumes.

Martina Biega is a year 12 student at CSHS taking the Certificate II in Agriculture and hopes to get a job on a cattle station next year.

She and some of her classmates have been regularly travelling to Silverdale Saleyards – the nearest cattle selling centre to Brisbane, located about 65km southwest of the school – to help out with the weekly sales.

“Some of us would help with weighing and penning the cattle, and others would run the sheets for the agent,” she said.

Silverdale yards manager Peter Hayes said he was impressed with the work ethic and ability the students had built up.

“When I found out they were from Corinda High, I had my reservations about their knowledge of cattle and how much help they might be,” he said.

“But I was surprised how much they’d learned about cattle – they were very keen and they picked-up the saleyard work quickly.”

Mr Hayes said he had done a bit of calling around to help the students find cattle station work after they finish school later this year.

“I think if they got onto a station they’d have no problems at all fitting in,” he said.

On top of the Silverdale work, Martina and her classmates in May travelled to cattle stations in Central Queensland to immerse themselves in rural life and work for a week.

The program, sponsored by Rabobank, divided the Corinda ag class of 15 up into groups of two, sending each pair to a different station for the week.

Martina went to Muidart Station west of Emerald with her class-mate Kaylah Hope. Other students went to properties near Dysart, Clarke Creek and Middlemount.

“It was awesome, they took us around and showed us how things worked and we got to see what happens on a property during the week,” Martina said.

Corinda State High School Ag teacher, Chris Butcher said after watching Year 12 agriculture students graduate last year and look for jobs, he realised how hard it was for city-based kids to compete for jobs in agriculture.

“Out of last year’s class I think there was only one student who went on to work in the cattle industry,” he said.

“Some of the others tried as well, but could only get short-term work.”

Mr Butcher said this year’s Year 12 cohort had worked hard to make themselves employable and deserved a chance to get a job in the industry.

“They may not yet wear moleskins or talk the lingo, but they really do want the job and are keen to learn,” he said.

Click on more images of the Corinda students in the gallery below.