WHILE a positive early pasture response has been observed in large areas of north western Queensland following the mass rainfall and flooding event in February, there are still significant areas where pasture recovery will take longer due to silting, erosion, scalding and ongoing waterlogging, QDAF Longreach principal scientist David Phelps told a webinar this week.

The webinar heard it will still take some weeks before restocking occurs in the flood-affecter region, with recommendations that stocking be deferred until the end of March to optimise pasture growth, and longer in areas where a slower response has occured.

Focusing specifically on management options to improve pasture recovery in the Flinders River catchment and northern section of Diamantina River catchment, Mr Phelps said most areas are responding, however the response is still patchy.

The main exceptions to the good response observed to date were flood plains which were still waterlogged and just starting to respond, deeply silted over areas which are not likely to respond until silt banks of roughly 20cm or deeper are washed lower, severely eroded areas which were unfortunately unlikely to respond any time soon, and areas that have flooded for five to 10 days that would not normally flood.

With palatable carryover feed limited in many areas – either there wasn’t any feed prior to the floods due to drought, or what feed was there has now rotted under floodwater or been covered by silt – surviving cattle will be reliant on new growth to satisfy their nutritional needs, and in some cases will still need good quality hay until perennial grasses grow stalk and start to bulk up.

The most likely areas to have a reasonable bulk of feed over the next four to six weeks include Mitchell Grass country that has received about 300-600mm of rain and red country that received rain but was not flooded. This also included flood plains with bull Mitchell and bluegrass browntop grass, but Mr Phelps noted that these regions could still be slower to get going, with early reports that some of those pastures have drowned.

Mr Phelps said letting the majority of perennial grasses start to go to seed would be beneficial. “The plants will still be green and the seedheads just emergent giving a balance between bulk and quality in the feed, plus having given the grasses chance to recover.

“For buffel pasture this may already be happening or into the next week or few days.

“For Mitchell grass pasture that have received 300-600mm of rain it will probably be mid to late March until the bulk of it is going to seed.

“Flooded and bull Mitchell and bluegrass-browntop pastures might not start to go to seed until mid-April  as the initial response has been slowed down by soils still being waterlogged.

The general recommendation was to defer restocking until end of March, or once the majority of perennial grass has started to go to seed, but some areas would be longer.

“There are also areas which have never been flooded before where we have seen severe erosion, new watercourses created, scalping and gouging, other areas have had flood water sit for much longer than usual covered in silt, and floodplains are still waterlogged.

“There is a potential risk for longer term impacts, these areas will only be able to withstand extremely light stocking rates for next four to eight weeks, but will start to respond once soils start to dry out.”

Mr Phelps said some producers had voiced concern about properties slipping back into drought if follow up rain was not received.

However, soil moisture maps indicated that large areas where rain fell in February are likely to have enough stored moisture through to about October. 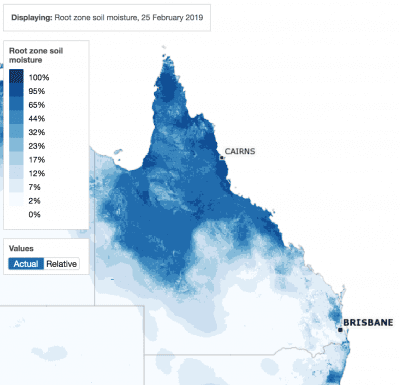 As the above map shows a large part of the region now has soil moisture levels well above 23 percent or above, enough to give a response from even just 2-3mm of follow up rain.

Barley Mitchell – of all the Mitchell grasses the least flood tolerant, five days underwater will generally lead to plant deaths

Buffel – can withstand 3-5 days of flooding

The webinar also provides DAF recommendations for grazing management options, strategies for building a resilient business and tools and gadgets that could be worth considering to aid with the recovery and rebuilding process.

Click on the video above the article to watch a full recording of the webinar.