NORTH Queensland rail yards appear to be coming back on track after several loading facilities between Townsville and Cloncurry were locked earlier this year.

Rail company Aurizon has recently sold a loading facility in Hughenden to the local Flinders Shire Council and the state government earlier this year announced a $4.26 million upgrade of a facility at Maxwelton, between Julia Creek and Richmond.

But in the creation of Aurizon in 2010, the Queensland Government gave the company ownership of the loading facilities along with the contract to operate the cattle trains. As the contract changed hands, Aurizon put padlocks on yards in Richmond, Julia Creek and Hughenden – leaving Cloncurry as the only option for loading. 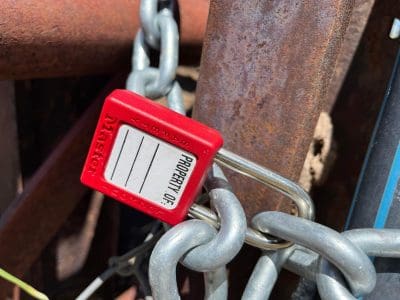 Locks were placed on yards at Julia Creek, Richmond and Hughenden earlier this year.

At the time, Aurizon was citing safety as the reason for locking the yards and said it was looking to make a commercial agreement Watco to use them – councils were looking to buy them back.

Hughenden is the first of the yards to go back to government hands and the Maxwelton facility is in the Richmond shire. Watco East West director Chris Hood said the sale of the Hughenden yards was a positive for the northwest rail corridor.

“Aurizon chose to take the avenue of locking the yards earlier this year and to its credit the company has sought the views of the communities and made this important decision,” Mr Hood said.

“We are grateful that they have sold the Hughenden yards, because it saves us from having to source alternatives. We were looking at upgrading council yards at Prairie, east of Hughenden, which we now don’t have to do.”

Flinders Shire mayor Jane McNamara said the sale of the yards was a win for all parties involved.

“Council has worked collaboratively with Aurizon, and I thank both teams for the positive discussions to come to this outcome,” Cr McNamara said.

Further west, Watco has already sought alternatives with the upgrade of the yards at Maxwelton, which Mr Hood said was completed.

McKinlay Shire mayor Phillip Curr said Aurizon had indicated that it did not want to sell back the loading facility at the Julia Creek yards. He said council was hoping to build another loading ramp to keep cattle trains coming through the town.

Mr Hood said while Maxwelton was doing a similar job to Julia Creek, he still hoped to have access to the public yards in the town.

“The current rail yards at Julia Creek only take up a little bit of land, it makes sense for them to be council owned too – then people can choose where they load,” he said.

“The main benefit here is for the community, they then own the yards and can do upgrades or whatever they like with them.”

Aurizon said it had finished its discussions with Watco and in regards to the Julia Creek yards, the company said it did not discuss commercial matters.