LABOR’s agriculture minister-in-waiting, Joel Fitzgibbon has shut down speculation that his party’s intention to close live sheep exports out of Australia within three or four years will inevitably lead to similar actions on live cattle. 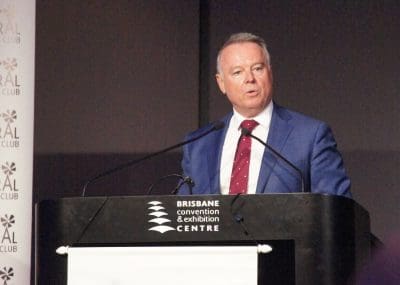 Speaking at a Queensland Rural Press Club gathering in Brisbane on Thursday, Mr Fitzgibbon gave a clear declaration that live cattle were not ‘next in line.’

“The Labor party supports the live cattle trade, unequivocally,” he told the audience.

“It has demonstrated an ability to meet community expectations on the animal welfare front – it has managed to do so since the unfortunate events of 2011.”

“It’s a $1.2 billion industry which is vitally important to those producers in the north, and on that basis I don’t see any challenge to its ongoing viability. It’s also important to our relationship with Indonesia,” Mr Fitzgibbon said.

“But what worries me is that our political opponents continue to use live export as a political issue, saying that as sure as night follows day, Labor in government would abolish the live cattle trade next. It isn’t going to happen,” he said.

“The trade knows only too well that the community will continue to have expectations about the trade, and if the industry continues to meet those very reasonable expectations over animal welfare standards, I’m very confident it will continue.”

Regarding live sheep exports and Labor’s commitment to shutting the trade down over coming years, Mr Fitzgibbon was asked how Australia would handle the two million sheep currently exported live each year. He said Labor would work with sheepmeat producers and others in the supply chain to ‘make the transition.’

“I believe that if done well, we can help the industry transition to something better – in particular, domestic supply chains, domestic processing and value-adding – the things that create jobs here in Australia,” he said.

“The live sheep trade has proven itself to be unsustainable, and in committing to close down trade, I was really concerned about the damage it was doing to Australia’s reputation in export markets – and indeed the threat it was starting to pose to the social license of the live cattle trade.”

“Eight months on, the industry has voluntarily suspended much of its operations, and is attempting to embrace new regulatory measures that are in fact much tougher than those it would have faced if it had moved earlier,” he said.

“In both cases, the sector opposed change, only to be forced later to embrace it. Along the way it suffered even more reputational damage.”

He said attacking and demonising those who raised environmental and animal welfare concerns, while defending the status quo, had proven to be a failed strategy.

“We have to accept that the status quo does not always look right to them – whether we like it or not. We need to move with consumer expectations, or risk losing the initiative. There has to be a better course, and politicians and industry leaders must work together to chart that better course. We need to anticipate change, and work with those in the sector what are not moving sufficiently quickly to accommodate the growing opposition to what they see in some cases as outdated practises.”

“We need to swim with the rising tide and surf the current of activism to a more sustainably profitable place – just as the red meat sector has done in pledging to be carbon neutral by 2030.”

Mr Fitzgibbon said there would always be those on the extreme left with multiple agendas.

“We’ve seen some examples of that of late, and I will stand with the ag sector to stare them down, if we must. But we have to be careful to differential genuine mainstream concerns from those with extreme agendas,” he said.

“But to win and maintain the trust of the growing majority who are listening to the debate, we need runs on the board. We need to demonstrate that we are moving, and to point to the things the industry has already achieved, or is on track to achieve.”

“We don’t talk enough about our environmental and animal welfare achievements – we don’t talk about them regularly enough, or convincingly enough.”

With a Federal election bearing down and an overwhelming opinion that Labor will sweep to power in coming months, Mr Fitzgibbon delivered a broad ranging address, touching on key rural issues including access to labour,  tax reform, energy costs, foreign and other investment capital and a suite of issues close to the bush’s heart.

“Labor’s agenda for the upcoming election is pretty simple, and quite clear,” he said.

“We want to grow the Australian economy, and ensure that every Australia has the opportunity to benefit from Australia’s success – opportunity, of course, being the operative word.”

“Strong rural economies in Australia need a strong agriculture sector, and people, services and infrastructure are critical to lifting agribusiness productivity and sustainable profitability across agriculture.”

He said there were many ag-specific policy issues to be addressed if Australian agriculture was to realise its ambitions to embrace all the opportunities that were before it, and overcome the associated challenges.

“Our food and fibre industries are in desperate need of the capital required to drive scale and build the on-farm infrastructure needed to lift productivity, and to build resilience and diversity.”

Mr Fitzgibbon said the coalition government could not have done more, over the past five years, to stand in the way of capital inflows into the ag sector – particularly from countries to Australia’s north.

“A Labor government will never play politics with foreign investment rules – it’s too important an area for populist policies,” he said.

“On the domestic front, people often, and understandably, lament the fact that Australia’s superannuation fund managers do not pay sufficient attention to the ag sector. But people are often too quick to offer simplistic explanations and solutions to this problem.”

“Industry expert Gary Weedon last year said in an ABC interview that returns were quite low in agriculture in relation to the risks and volatility of the investment. We should all reflect on that deeply and regularly – we should not kid ourselves about the realities of some of the challenges we face in this regard.

“We (collectively) think that agriculture is special – it’s the sector that feeds us – but unfortunately to the investor or funds manager, there is nothing special about agriculture. Money will flow into ag when the funds managers think there is a bigger buck to be made there than some other asset class.”

“While they are obviously an important part of the equation, the success of the sector from an investment perspective is not measured by volume of product produced or the prices secured. The numbers that really matter to them are profit and return on investment.”

Fogging up their reading glasses were two key common concerns – perception and risk.

“While there are exceptions to the rule, sadly when agriculture is in the news, it’s for all the wrong reasons,” Mr Fitzgibbon said. “Making that worse, is that too often politicians run to the camera to reinforce the negative message.”

He listed seven risk factors that ag investors tended to baulk at:

“Government certainly has a role to play in helping the ag sector meet its aspirations. No one farm business or group of businesses can hope to secure access to export markets on fair terms alone. That’s the work of government, and it will be a priority for a Shorten Labor government. Nor can farmers alone protect our product from pests and disease, or guard our reputation and brand. That is primarily the role of government.”

“Costs like energy are key issues for the agribusiness sector, and a Shorten Labor government would deliver an overdue architecture change for our energy system which gets investment flowing again  and drives costs down,” he said.