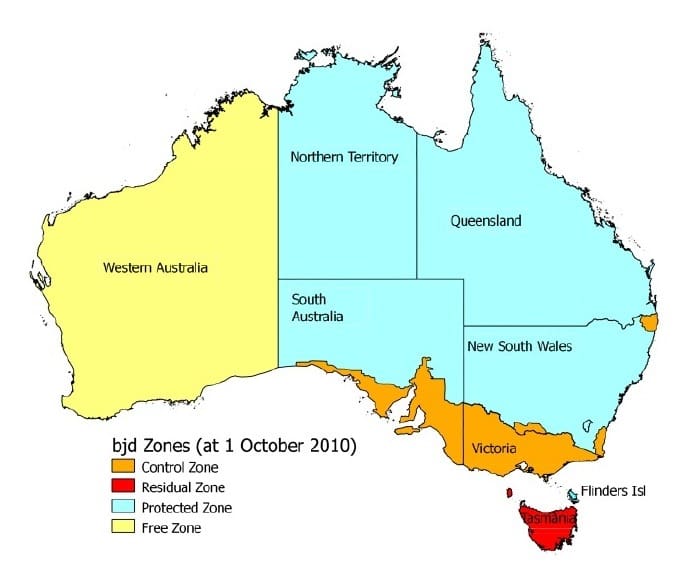 The new national approach to BJD management recommends the removal of BJD zones across the country.

A long-running review of national policies for managing Bovine Johne’s Disease in Australia has recommended a deregulated approach and the removal of BJD-status zones.

The new national approach, released by Animal Health Australia this morning, favours a market-driven approach where producers decide how to manage their risk of the disease on their own farms, based on market requirements.

It will now be up to each State Government to decide whether the new national approach will apply in their respective jurisdictions, or whether state-based restrictions on BJD management will continue.

It shifted the focus of BJD management to the wider biosecurity practice of reduction and management of all diseases.

“Throughout the consultation period, time and time again, producers talked about the significant emotional and financial stress they faced when dealing with existing BJD management regulations,” Mr Rowland said.

“So, while this new approach introduces a substantial shift in thinking, better biosecurity awareness and practices will provide a safer environment for producers to operate in.

“The new framework recognises the key role producers have in the management of diseases on their property and for that reason producers are the very cornerstone of the new approach.

“This doesn’t mean that producers now have to carry the responsibility on their own. The management of BJD will continue to be a shared responsibility between government, the industry and producers.

“In fact, the deregulation and removal of zoning will be led by the state and territory governments, with the time frame for implementation resting with them,” said Mr Rowland.

He said the successful introduction of this new approach will require substantial communication efforts to assist producers and interested stakeholders in understanding the new approach, its operation and its effects.

“A national communications plan is currently being developed to ensure all affected parties are informed, engaged and kept up‐to‐date about the changes.

“A key component of this communications plan will be a public forum, held in the coming months.

“This forum will provide the ideal opportunity to talk first‐hand with producers and address any questions they may have about the new way forward,” said Mr Rowland.

AHA will continue to work with industry and government to ensure the Framework is implemented as smoothly and quickly as possible to enhance the biosecurity credentials of Australia’s cattle industry.

The final Framework Document: BJD ‐ Where to from here? A Fresh Approach to the Management of Johne’s Disease in Cattle: Management Plan for Cattle Production Conditions is available here

JD in cattle is endemic in some cattle production areas of Australia but in other areas the disease is not known to exist (or exists at a low to very low level).

A review of the National BJD Strategic Plan 2012‐20, undertaken during 2015, included a thorough consultation process to evaluate the plan and make a decision on future national management arrangements.

The need for a different approach

The review identified there was a groundswell of support for JD to be dealt with differently from the way in which it has been over the past 12 years.

There was general support for JD to be addressed under a common biosecurity approach for endemic diseases, with less emphasis placed on an individual disease.

It was not appropriate for the existing strategic plan to continue in its current state.

Through an extensive consultative process a revised plan has been developed for implementation in early 2016.

This has been a collaborative effort of industry and governments.

The objectives of the recast Management Strategy for JD in cattle are to:

In early 2015, at the request of the BJD Steering Committee and the Animal Health Committee, AHA commenced the coordination of the BJD Review process.

The review process allowed for all parties (including industry, government and community) to provide input into how Australia was going to manage BJD into the future.

The process allowed for a wide range of views to be considered and broad consultation to take place: