A MEMORIAL service will be held this week for Northern Territory cattle, buffalo and crocodile industry figure Norm Fisher, who was tragically killed in a helicopter crash earlier this month.

Along with his wife Marnie, the 47-year-old ran a sizeable contract mustering business and three stations – including Swim Creek, Mary River East and Wombungi. They ran cattle, buffalo and a safari business.

A memorial service will be held at 3pm on Friday afternoon at Bamurru Plains, via Swim Creek station.

Mr Fisher’s death has been followed by an outpouring of tributes from northern cattle industry figures, including live exporter Patrick Underwood who took to Facebook to pay tribute.

“Norm would be the most capable, helpful and reliable bloke I have ever had the pleasure to buy stock off. Quite simply he is irreplaceable,” Mr Underwood said.

“I’m still in shock because I just thought he was invincible. Deepest condolences to Marnie, his kids and Alan and Sheree and the Fisher family. Forever young and never forgotten.”

“He covered huge areas of the territory with his mustering business and areas that are extremely remote and difficult to access,” he said.

“Every time you called him you could hear the chopper blades in the background, but somehow, he always had time to chat. Whenever I was looking for more animals to fill up a boat or looking to drop some numbers back, he would always try and accommodate – no matter how busy he was.

“You only get that good through experience and by being talented in the first place. He was clearly a leader and any accolades he receives won’t be enough.” 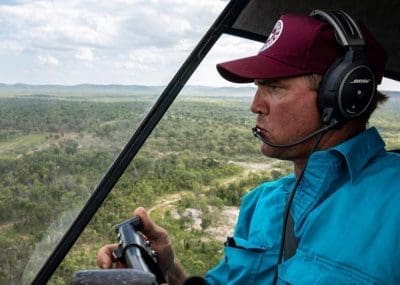 The NT buffalo industry council has also been paying tributes to Mr Fisher, issuing this statement to pay tribute:

The livestock community is in mourning following the death of Norman Fisher in an East Arnhem helicopter crash on November 15.

Norman was a driving force in the Fisher family’s extensive livestock operations spanning a number of properties across the Top End and including sizable cattle, buffalo and contract mustering businesses.

The 47-year-old and his wife Marnie had also built-up a large commercial presence in the crocodile industry, as well as running a successful safari business. Norman also maintained significant land management partnerships with Traditional Owners in areas like Ramingining – the location of his tragic death.

Norman, the son of Alan and Sheree Fisher, was an expert helicopter pilot and widely respected for his mustering skills.

NT Buffalo Industry Council president Adrian Philips said Norman’s death had sent shockwaves across the many industries and communities in which Norman and the Fisher family are involved.

“Norm was a once-in-a-lifetime operator. He is truly irreplaceable. In terms of his role in the Fisher family and his presence across the industry, it’s impossible to measure the sense of loss that we’re all feeling,” Mr Phillips said.

“Norm built an incredible legacy which will live on for many years to come, especially in his children.”

In recent years, Norman’s adult sons Nathan and Josh have worked alongside their father and are both accomplished and widely respected stockmen.

Norman and Marnie have also raised their seven-year-old daughter Miranda in the thick of the family’s busy operations with a love of livestock and bush life. They welcomed a baby son, Riley, in May of this year, who family describe as being “the apple of his father’s eye”.

The Fisher family’s involvement in the NT buffalo industry stretches back over 50 years. When Norman was born in 1974, his family was based at Mary River Station near Pine Creek.

The Fishers took up Swim Creek station, east of Darwin, in 1983 and later purchased Wombungi Station, west of Pine Creek. In 2017, they bought Mary River East – a section of the original Mary River Station which they had sold in 1983.

“Our kids were keen to try everything and would always jump in the bull catcher with me. Norman was nine years old when he first operated a bulldozer and would drive anything.”

The NT Buffalo Industry Council said the Fisher family was grateful for the privacy being afforded them at this devastating time.